There was a Black Cat Cafe on calle de Comercio in Ciudad Juárez. It was the location for one report of dealing in counterfeit currency.

The original “Adiós á Mamá Carlota” was a song about Maximilian’s empress, written by Vicente Riva Palacio as a parody of “Adiós Oh Patria Mia!” by the poet Rodríguez Galván.

There was a Central Bar and Cafe at 215 South Stanton Street, El Paso, in 1915 though the proprietor, S. G. Gonzalez, had another establishment called the Central Cafe in Avenida 16 de Septiembre, Ciudad Juárez.

The Good Luck Tavern on 417 S. El Paso Street was operating by 1935 and still in business in August 1949, when it was accused of openly running gambling tables El Paso Herald-Post, 1 December 1949. 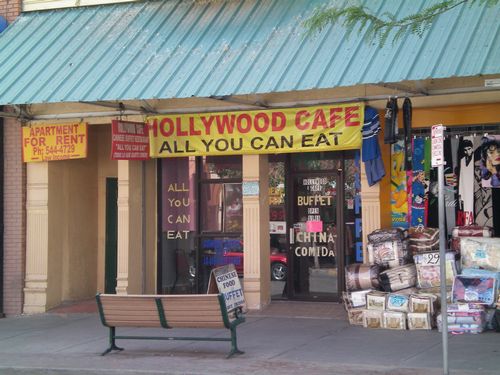 The Merrick Building at 301 South El Paso Street was built in 1887. It became the Hollywood Café in 1931. The Hollywood Night Club was started in the forties, and Tony Salem was the manager for over twenty years. Nowaday it survives as a Chinese buffet, but retains the name Hollywood.

The Hotel Almada, owned by Manuel Almada, located on the seafront, facing the bay, had for 70 years the best reputation in the state, with its restaurant and Gambrinus cantina.