The Lerdo to Torreón Tram Company 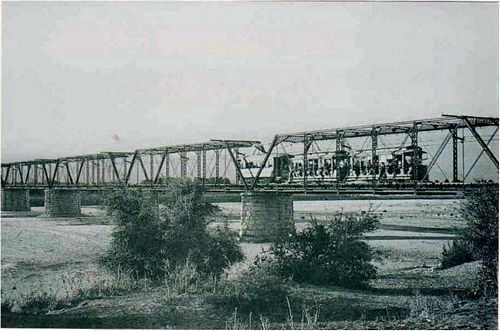 In 1889 a five kilometre horsedrawn street car route was established between the town of Lerdo and the Mexican Central Railroad station in Gómez Palacio, both in the state of Durango. A decade later, on 4 June 1898, a local poet named Manuel José Othón secured a franchise to electrify the Lerdo line and extend the tramway to Torreón. Construction began on 16 September 1899 and the Compañía de Tranvías de Lerdo a Torreón ordered four closed motor trams, four cross-bench trailers and five work cars from J. G. Brill in Philadelphia on 26 May 1900. The first five kilometres, from Lerdo to Gómez Palacio, began operation on 3 March 1901 and the track was extended across the Río Nazas to the railroad station in Torreón on 3 July 1901. The company ordered further passenger trams from Brill in 1901 and from the St. Louis Car Company in 1903. By 1904 it had a fleet of 23 vehicles.

In view of the variety of paper money circulating in the Comarca Lagunera, on October 15 the military authorities in Torreón decided that the only ones with forced circulation would be bank-on-bank cheques and the issues of the Compañía Industrial Jabonera, the Compañía Algodonera and the Ferrocarriles Eléctricos. Unfortunately, they forgot to mention the state issue and so on 18 October had to issue a correctionEl Demócrata, Segunda Época, Tomo II, Núm. 22, 26 October 1913. Pastor Rouaix, the governor of Durango, issued a circular detailing all the issuesPeriódico Oficial, Durango, Tomo XXXVIII, Núm. 61, 6 November 1913.

On 10 February 1914 the Jefe Político of Cuencamé, Martín Martínez, wrote to the state government to ask about various issues circulating in his area (including the Cia. Industrial Jabonera de la Laguna, S. A., Ferrocarril Eléctrico de Lerdo a Torreón, S. A., Francisco Madero, Federico Ritter, and Guillermo Purcell y Cia.) and was told that only those of the Ferrocarril Eléctrico were of forced circulationADur, Fondo Secretaría General de Gobierno (Siglo XX), Sección 6 Gobierno, Serie 6.1 Acuerdos, caja 1, nombre 3. 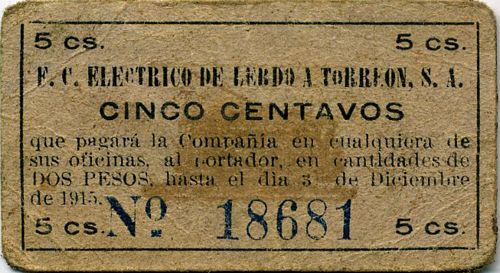 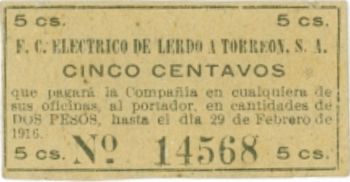 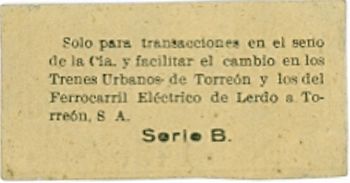 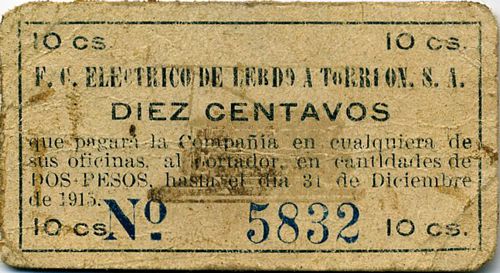 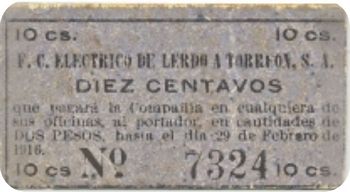 On 9 May 1916, in response to a request from the company’s manager, León Branger, the Presidente Municipal of Torreón authorised the Ferrocarril Eléctrico de Lerdo a Torreón to issue a series of vales with a total value of $10,000. The terms, which were no doubt similar to the terms in previous authorizations, were that the company had to deposit $10,000 in the Municipal Treasury; the vales were for use on the company’s trams and nowhere else and the police were authorized to confiscate any that contravened this condition; the Presidente Municipal would decide for how long the vales would circulate, and the company would give the public a month’s notice of their withdrawal. Finally, any of the $10,000 that was not redeemed would be used for the public goodAMTor, Copiador de Presidencia Municipal 3, pagina 518. On 11 May the Presidente Municipal. Ramón Méndez, named Antonio Gutiérrez interventor to oversee the production of the valesAMTor, Copiador de Presidencia Municipal 3, pagina 602 and the $10,000 surety was deposited by Isauro Martínez in the municipal treasuryAMTor, Copiador de Presidencia Municipal 3, pagina 603.