There were several reports of the counterfeiting of cartones

0n 28 October 1914 an Italian, Mario Rolla, was apprehended by the police as he was trying to pass a large quantity of counterfeit 5c and 20c cartones in a store in the city centre. He was found to have a seal with the national shield which he used to stamp his cartonesNueva Patria, Tomo I, Núm. 34, 29 October 1914.

On 2 January 1915 a workshop for producing counterfeit cartones was discovered in Colonia Vallejo. As well as equipment the police found two boxes of bogus 10c and 20c cartones and four individuals named Galo M. Larín, José Cuesta, Heriberto González and M. SevillaLa Opinión, Año I, Tomo I, Núm. 29, 3 January 1915. The criminals had already circulated several thousand pesos in false cartonesLa Opinión, Año I, Tomo I, Núm. 30, 4 January 1915 with an image.

On 7 April José Navarro, Antonio Gómez and Alvaro Camargo were shot for counterfeiting 20c cartones. Navarro was the ringleader and funded the operation, Gómez owned the printshop and Camargo was the engraver. They had issued $5,000 a day in the four day before they were arrested. Around twenty people had been arrested for counterfeiting cartonesThe Mexican Herald, Año XX, No. 7152, 7 April 1915.

These were arrested on 28 May 1915 for counterfeiting 20c cartones. The experts at the Oficina Impresora de Estampillas admitted that they were very well madeEl Norte, 5 June 1915. However, another report was less complementary. It said that the cartones were badly counterfeited (burdamente falsificados) and were missing the seal. The cliches were made of copper, but so badly done that it was almost impossible to distinguish the main features and the cartones were printed by placing the cliches on the cardboard and then a heavy weight, so some impressions were blurred (El Renovador, 5 July 1915).

On 28 June the police discovered a ‘factory’ in 12a. calle de Mazatlán, in colonia Vallejo and arrested Teófilo and Silvestre Durán, Carlos Quesada, Adolfo Rosas, Felipe Retana, Ernesta Cervantes and Damiana Estrada, as they were producing more than 500 20c cartones, lacking only the final overstamp. They found two lead cliches of the face and reverse. The police than went to a ‘branch’ at 1a calle de Régules 10, where they found more instruments and a good quantity of half-printed cartonesEl Combate, Tomo I, Núm. 12, 28 June 1915.

The police discovered another ‘factory’ making $50 sábanas and 10c and 20c cartones at calle de Altamirano 792, Tacubaya, the home of Juan M. Ríos. Pedro Mata was arrested as an accompliceThe Mexican Herald, 29 June 1915.

0n 19 July five people were arrested for at casa C on the corner of calles del Dr. Pascua y Andrade for counterfeiting 10c and 20c cartones. All the usual paraphernalia was recoveredThe Mexican Herald, 19 July 1915.

On 30 July 1915 El Renovador printed an editorial decrying the recent decree of the governor of the Distrito Federal that ordered the free circulation of cartones as people were refusing to accept them because of the number of poor counterfeits in circulation and knew that sooner or later the cartones would be disownedEl Renovador, Tomo I, Núm. 36, 30 July 1915.

On 4 August the police found a ‘factory’ for 10c cartones in 9a calle del Factor. These were recognizable as they were printed on a dull blue (azul opaco) pressboardThe Mexican Herald, 6 August 1915.The counterfeiter, Rafael M. Meza, who had been unwittingly betrayed by his own son,was shot a couple of weeks laterThe Mexican Herald, Año XX, No. 7272, 18 August 1915

On 6 August notices were put up on the trams that the inspectors of the Compañía de Tranvías Eléctricos were authorised by the military authorities to cancel any counterfeit cartones that they were offeredThe Mexican Herald, Año XX, No. 7263, 9 August 1915. 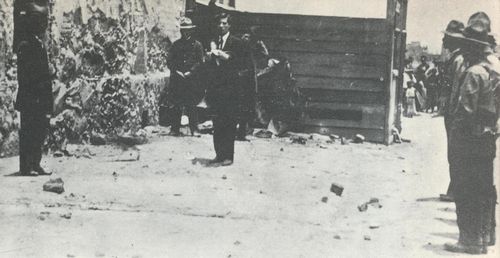 Carlos Meza was discovered by police with his wife in the act of counterfeiting 10c cartones. He was judged by the Consejo de Guerra and publicly executed in front of the Tercera Delegación de Policía on 19 August 1915. General Pablo González pardoned the wife and gave her money for her two childrenGeneral Francisco L. Urquizo, Recuerdo que ….

Adelaido Velázquez was a 52-year-old lawyer, living at 3a calle de la Violeta no. 63; Leopoldo Cardona, a 33-year-old businessman, living at 4a calle de Lerdo no. 124; Salustio Bárcenas, a 32-year-old printer, living at callejón de Niño Perdido no. 24; and Francisco Espinosa, a 24-year-old deaf-mute litographer, from Zamora, Michoacán, living at 2a calle de Cocheras no. 70. These were arrested by the Policía Especial de la Comandancia Militar, along with their equipment and false currency (cartones and sábanas), and confessed their crime. They had been involved in a plant for bottling wine and so acquired the press and other lithographic equipment needed to print labels, but from mid-1913 had found it more productive to produce cartones and notes.

Velázquez, Cardona and Bárcenas were sentenced to death: Espinosa to ten years imprisonment. Bárcenas and Velázquez were shot in the Escuela de Tiro on the morning of 13 November. Cardona escaped from his prison in the main gate of the Palacio Nacional, whilst under the watch of teniente Felipe Acevedo. Teniente Acevedo y cabo José Aguilar were shot for allowing him to escapeEl Pueblo, 13 November 1915.