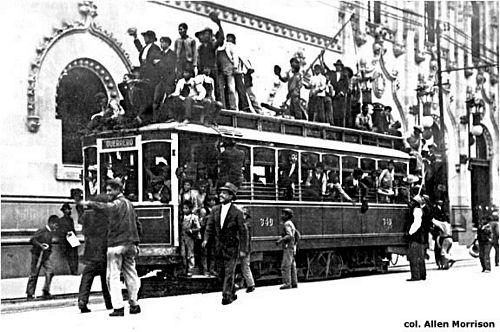 It is an established fact that during the Revolution the hoarding of coins by banks and individuals and subsequent lack of small change lead to various attempts to produce substitutes from state-sanctioned cartones to privately produced chits (vales). An unused streetcar ticket could always have some residual value, but how far was this institutionalized?

This is a preliminary attempt to list those items that might be considered as “paper money” and to reconstruct the sequence, based on appearance, values, signatories (depending on whether or not Managing Director (Director Gerente) preceded government-imposed Manager (Gerente General Interventor) and any references to dates or currency.

Tickets were sold in perforated strips. Two notes have the signature of George Conway as Director Gerente 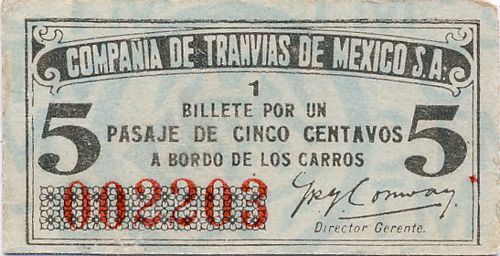 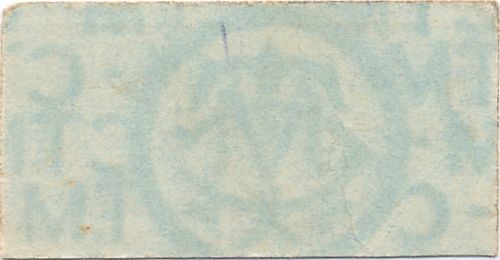 whilst another has an undeciphered signatory as Director Gerente.

Whether these could be classified as “paper money” depends on whether they were used as such in a small “window” in 1914. However, they could predate the scarcity of small change that necessitated emergency measures or, even more likely, date to a later period, after May 1919, when the company had been returned to its shareholders and such measures were no longer necessary. George Conway was the experienced manager of the Monterrey Railway, Light and Power Company (Compañía de Tranvias, Luz y Fuerza Motriz de Monterrey) and the Monterrey Waterworks and Sewer Company (Compañía de Servicio de Agua y Drenaje de Monterrey) that the foreign shareholders chose in 1916 to head their operations in Mexico City.

From 13 April 1914 the company sold vouchers (planillas) in strips (8 at 6c or 5 at 10c) or in booklets (100 at 6c or 50 at 10c) from its offices at Indianilla, its kiosk in the Plaza de la Constitución and other outlets. Conductors were obliged to give a ticket in exchange for the voucherEl Imparcial, 11 April 1914; The Mexican Herald, 17 April 1914. This led to abuses, with the company accused of monopolising any small change and on 14 June the local council petitioned the governor to put a stop to its abusesEl Sol, Núm. 14, 14 June 1914. The complaints continuedEl País, 2 August 1914.

By early September the Diario del Hogar could report that for some time almost all the businesses in the city centre, and even a large part of those in the suburbs, were using the company’s planillas to make change of less than a peso. It asked whether the company had the right to sell its planillas in large quantities, like banks did with their banknotes, and if so, surely it should also be obliged to exchange them at its bank (the kiosk) for silver coinEl Diario del Hogar, Año XXXIII, Núm. 11271, 5 September 1914. On 8 September the same newspaper reported that the company had suspended this issue (emisión cuasi forzosa de su “papel moneda particular”) citing the ingratitude of the public, despite the costs of cardboard, printing etc. it had incurredEl Diario del Hogar, 8 September 1914.

On 18 September El Diario del Hogar had an editorial that the company was trying to subvert the government’s restrictions and planning to reissue its own planillas. The company claimed that there was a lack of small change, but the newspaper argued that it should use the coins that it had allegedly hoarded, and that the company was continuing the abuses of the Díaz and Huerta’s erasEl Diario del Hogar, Año XXXIV, Núm. 11283, Tomo 50, Núm. 2, 18 September 1914. The paper accused the company of hoarding 80% of the fractional coinage in circulation in its strongboxes in favour of issuing planillasEl Diario del Hogar, Año XXXIV, Núm. 11290, Tomo 50, Núm. 9, 25 September 1914. In fact, because of the company’s labour troubles and strategic importance the Constitutionalist government took over (intervened) on 12 October and named Tomas E. Ramos as Interventor. A 1c note has Ramos as Gerente General Interventor and refers to a decree of 20 November

but we do not know the import of that decree. The text states that the ticket should be used only in part payment of a fare, which suggests that they were an attempt to overcome the shortage of 1c coins. A notice of 23 December, referring to the 20 November decree, reminds the public that the 1c boletos should be used to make change on the trams and for no other purpose. The police had been instructed to seize any boletos used for commercial transactionsAHCDMX, caja 80, exp. 9.

However, these will have been short-lived because on 9 January 1915 the newspaper El Radical reported that the 1c planillas, introduced to facilitate change, were to be withdrawn as the Mexico City mint had produced enough 1c coinsEl Radical, Tomo I, Año 1, Núm. 84, 9 January 1915. In return the company was to be permitted to issue 6c planillasLa Convención, Tomo I, Núm. 38, 13 January 1915.

Known undated 6c notes have Manuel Aguilar as the manager and states that they are valid only on the streetcars and worthless once detached from their strip.

However, on 25 January 1915 the governor of the Federal District, Vito Alessio Robles, authorised the company to issue 1c planillas solely for use on its carsEl Monitor,Tomo II, Núm. 53, 26 January 1915.

After a Zapatista/Convencionista interlude the Carrancista general Pablo González retook Mexico City on 2 August 1915 and appointed Teniente Coronel José Morales Hesse Gerente General Interventor. On 7 August González gave Hesse permission to issue five million 5c and five million 10c tickets (planillas). They had to be stamped to ensure that they were not counterfeited. Two days later Hesse reported that because of the dire need for these coupons they had already been printed and put into circulation. As they had been printed on the company’s security paper they could not be counterfeitedAPGonzález, leg. 3, exp. 207) (roll 8) letter Hesse to Pablo González, 9 August 1915; The Mexican Herald, 22 August 1915.

On 18 August new rules were fixed inside the streetcars, which. inter alia, reiterated that the planillas were exclusively to be used for giving changeThe Mexican Herald, 19 August 1915.

On 28 September the governor of the Federal District decreed that these planillas issued for payment of fares and to facilitate the making of change, should not be used in business transactions as had been general practice. Merchants who received them or paid them out in exchange for merchandise would be punished with 15-30 days’ arrest or a fine of $100 to $500. The same conditions would apply to business houses (among whom restaurants, cafes, bar-rooms, etc.) who in order to facilitate their patrons with small change, had issued vales for different amounts. The decree pointed out that these vales contravened Carranza’s decree núm. 14 of 28 December 1913 and the Federal District decree of 9 August 1915The Mexican Herald, Año XXI, Núm. 7,315, 30 September 1915.

Here is evidence that whatever the intent these tickets were used in general commerce.

On 11 May the company warned speculators who were hoarding its planillas that they would not be exchanged for infalsificable moneyEl Pueblo, Año III, Tomo I, Núm. 556, 12 May 1916.

On 20 June a new issue of planillas infalsificables appeared, and the old ones were to be retired by the end of the monthEl Pueblo, Año III, Tomo I, Núm. 594, 21 June 1916. These 10c and 20c tickets refer to papel infalsificable. 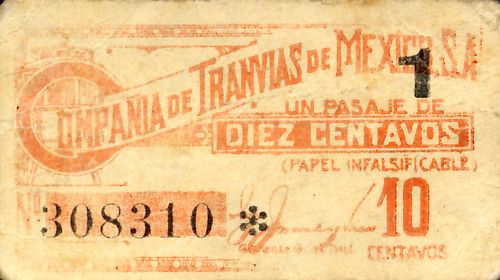 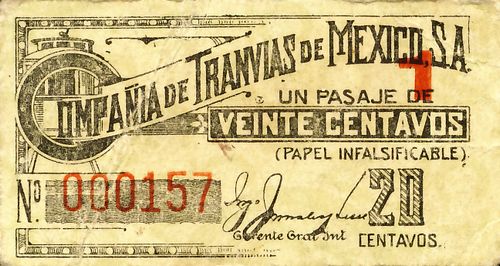 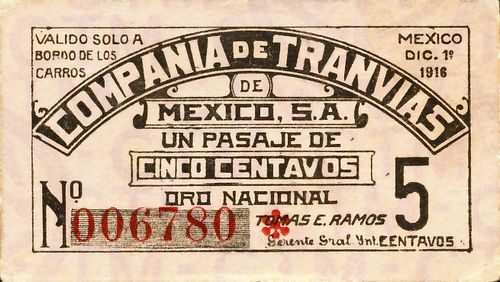 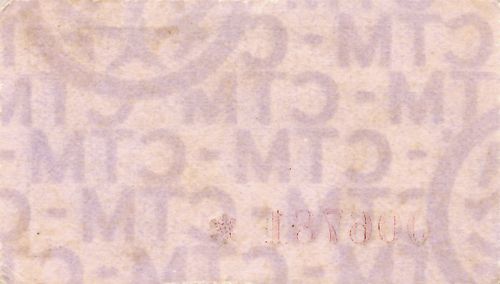 In July 1917 the Secretaría de Comunicaciones y Obras Públicas authorised the company to issue 6c planillas, again solely for the use of passengers, as tickets and not, for any reason, as vales or paper moneyEl Pueblo, Año III, Núm. 968, 6 July 1917.

Three years later, in 1920, the problem still persisted. On 21 April Charles Blackmore, the American Bank Note Company’s Resident Agent in Mexico City, sent his head offices a clipping from the Excelsior and samples of strips of 5c and 8c ticketsABNC. All the tickets in a single strip had the same serial number and an ordinal number: thus the larger images illustrated the tenth on a strip of 5c tickets (numbered 002611) and the fourth in a strip of 8c tickets (numbered 374642). The Excelsior article stated that the planillas had been used in the absence of small change but that the mint had recently produced enough bronze coinsExcelsior, 21 April 1920. Blackmore wrote “A few weeks ago the question of small change became so acute that car tickets and postage stamps were being used to take the place of small coins. The article is correct in so far that street vendors and small establishments have, during the last few days, refused the car tickets.
I enclose specimens of the Tramway tickets. The blue “planillas” are worth 5c each and these are the ones which have circulated most freely, though many persons have accepted an 8c yellow ticket as good for 10c.”