In October 1914 it was reported that some small businesses, because of the lack of small coins, had issued fichas with which to make change. As these could only be used in the same establishment, it seemed that the government would take steps to stop the practiceEl Reformador, Tomo I, Núm. 64, 15 October 1914. However, in June 1915 a newspaper could report that it had received complaints about the paper money issued by cantinas, shops and even hawkers in the market. Although people had done this to overcome the shortage of small change, the practice was illegal and the public were not obliged to accept such paper or cartonesEl Presente, 6 June 1915. 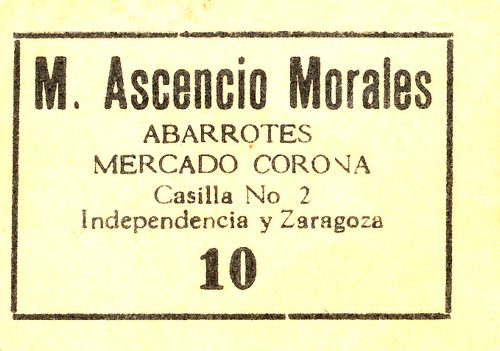 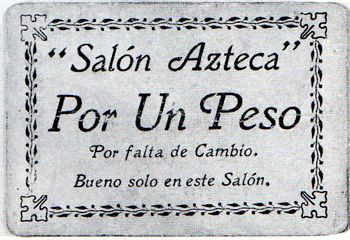 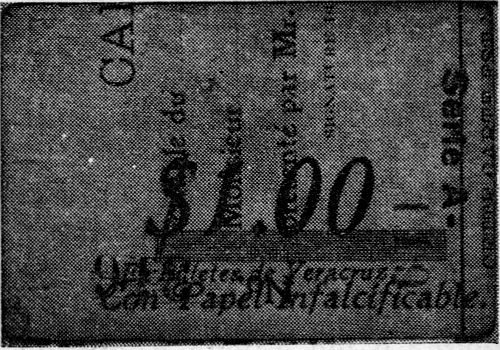 This establishment was run by Agustín Robles.

This company ran the trams in Guadalajara. In 1905 the local electricity company and several horsecar operators formed the Compañía de Tranvías, Luz y Fuerza. This was absorbed in 1909 by the Compañía Hidroeléctrica e Irrigadora del Chapala, which had a power plant at El Salto de Juanacatlán 30 kilometres south of town.

In December 1915 it was said that the company was considering withdrawing its bonos because of their poor state. The company was the winner because it did not exchange or make good any bono that had deterioratedBoletín Militar, Tomo III, Núm. 333, 1 December 1915. 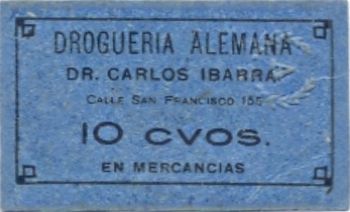 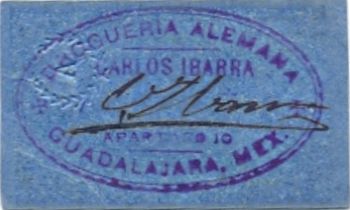 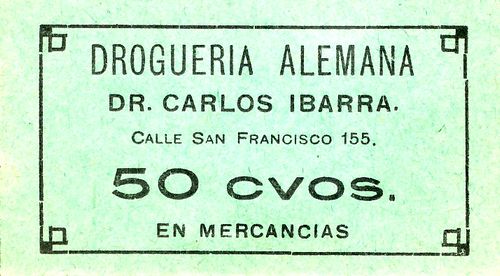 In April 1916 an American stationed in Guadalajara told the following tale, of an event that was replicated throughout Mexico.
“The German Drug Store, (probably the largest drug establishment in the city) just opposite the Consulate, on San Francisco Street, closed its doors about a week ago, on account of the following: A customer offered in payment of a purchase a bill which the proprietor refused to accept. The … customer reported the matter to the Presidente Municipal, who fined the druggist five hundred pesos for having committed the offense. When the druggist offered in payment of said fine exactly the kind of paper money which he had refused to accept from the said customer, the said Presidente Municipal did then and there decline to accept such money – which so disgusted the druggist that he at once closed his place of business! The proprietor of the German Drug Store is a Mexican and fearing to fare yet worse from the operation of the edictCarranza threatens establishments closing up or suspending operations, Querétaro, 31 March 1916, he is just now reopening his store"Will B. Davis, Experiences and Observations of an American Consular Office during the recent Mexican revolutions, 1920. 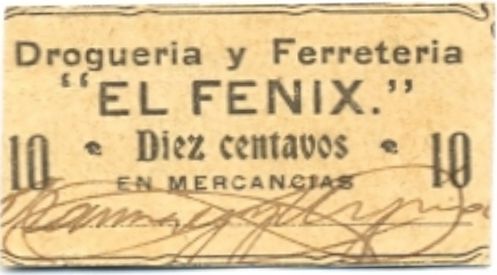 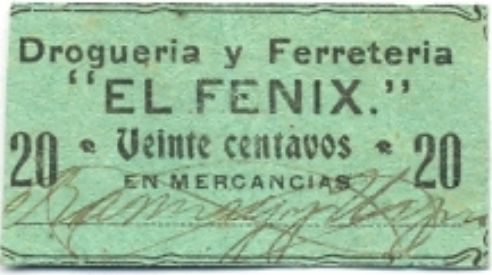 The Cantina of the Hotel Francés issued a 5c note, with the name of Enrique Villa. 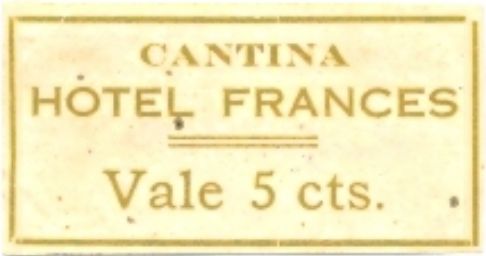 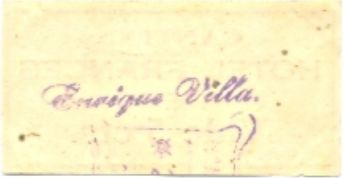 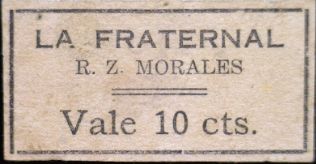 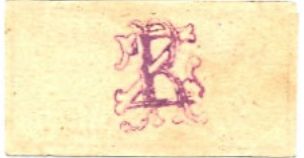 A 10c note, placed here because of the similarities in design. 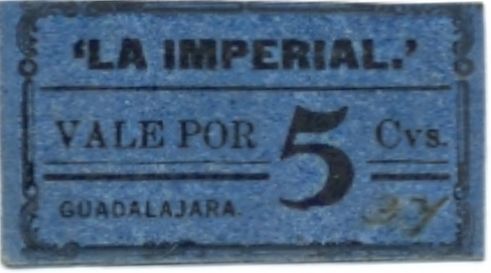 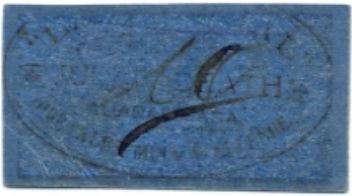 A 10c note with the name of Francisco Valdez 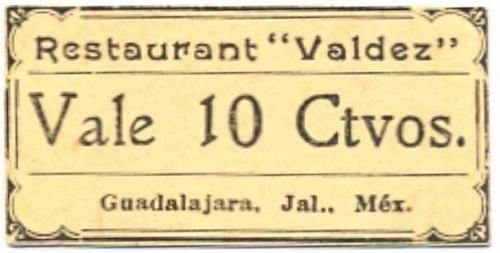 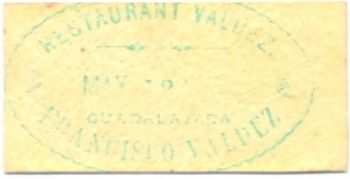 This restarant in the avenida Colón, owned by M. Caire, has $5 note printed by Imprenta y Libreria Font y Velasco.

A cantina called “the shrapnel” obviously dates from the Revolution. A 20c note with the names of Manuel Romero é hijo

A 5c note with the name of Rotter y Franco

This was run by Salvador Martínez Frías.

On 19 May 1915 Leopoldo López Zavala, owner of two bars, asked the Presidente Municipal whether he could issue boletos of one and three centavos for his customers to use, attaching samples for consideration.. He was refused but told he could issue chequesAMGuad, Hacienda 1915, exp. 11.

On 22 November 1915 a José M. Silva wrote to J. E. González, the Subsecretario interino, that he had $45.50 in cheques issued by Celso Vergara. He had presented them to Vergara who refused to redeem them as the time limit had expired. Then he presented them to the Tesorería Municipal which said that they no longer had funds from Vergara. So he was asking the Governor to order the Tesorería Municipal to exchange them. González passed the message on to the Presidente Municipal who replied, on 24 December, that none of his offices had information on cheques issued by VergaraAMGuad, Hacienda 1915, exp. 145. 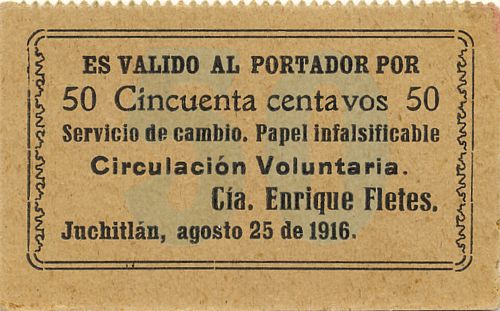 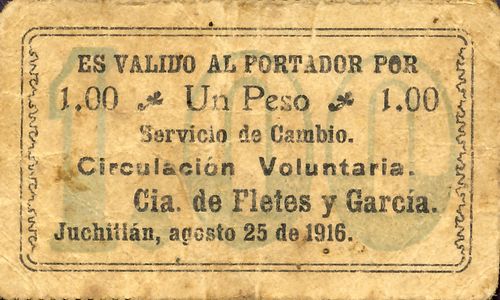 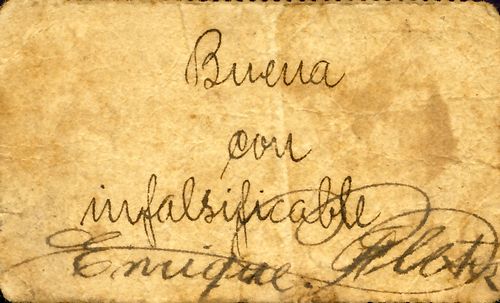 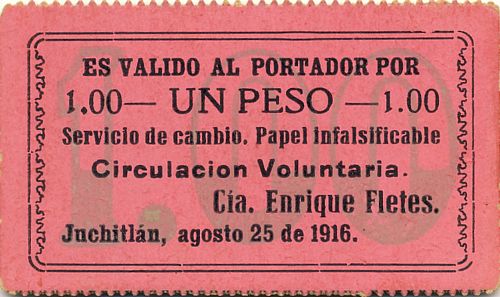 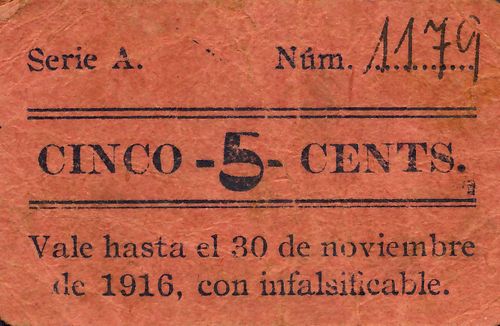 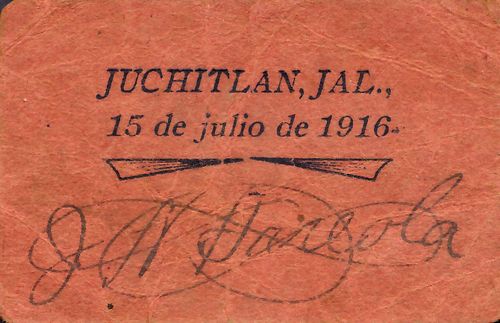 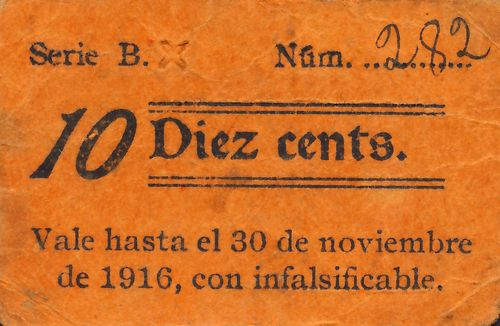 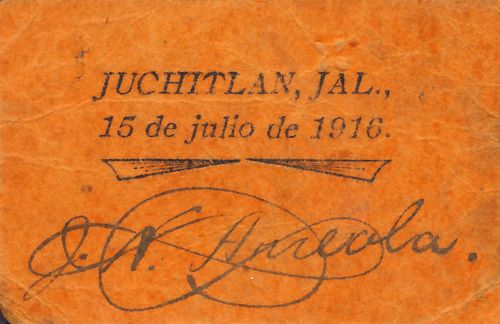 Notes dated 15 July 1916 and valid until 30 November, in infalsificables.

These notes are dated 1 September 1915 and on the reverse they state that they are a temporary measure (emisión transitoria) solely to facilitate making change and are of forced circulation according to an agreement authorised by Manuel M. Dieguez. They have provision for the signature of an Interventor as well as a Presidente and Secretario. 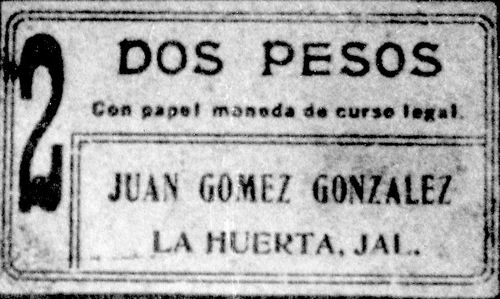 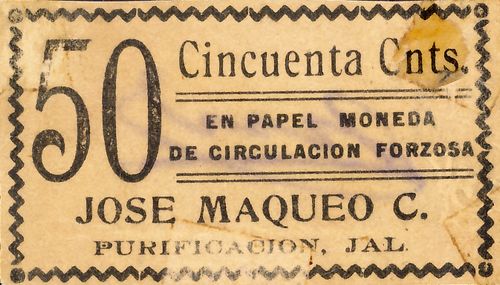 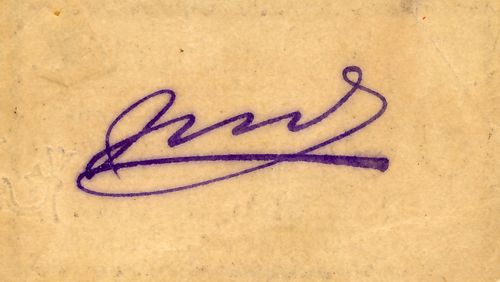 For this issue see the Hacienda de Apulco.