This $5 model has the order number 6345 and date 17 May 1915. It was intended to be released in Veracruz, to where Carranza’s had transferred his capital at the end of 1914. Cedrián López-Bosch suggests that this was prepared for Pascual Ortiz Rubio, Carranza’s agent, when he was in the United States arranging for the printing of currency. 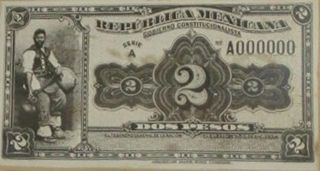 These $1 and $2 models, with the order number 7058 and date 1 June 1916, are similar to the other infalsificables but refer to the decree of April 1916, as do the notes printed by the Oficina Impresora de Gobierno de México, and have a manuscript date of June 1916. The vignettes are similar to those used on other Mexican notes from this time, such as an unissued 50c Banco de Nuevo León note.