On Saturday, 24 January 1914, some of the principal merchants of Pachuca called upon the mining companies and asked them to issue script as had been done elsewhere. They explained that their sales had been cut very heavily through lack of change and that they would not only welcome mining companies’ paper but would help in any way. The eight principal mining companies, with the approval of the Governor of the state, agreed to issues vales in a common format with the name of the issuing company printed on its notes. San Rafael subscribed to $10,000 of this first issue, an amount based upon its requirements for four weeksAHMM, Fondo Norteamericano, vol. 41, exp. 15, Dirección General, Correspondencia, Mar 1913 – Nov 1914, Weekly Gossip letter.

They are signed by José Loreto Salinas as Director y Administrador. 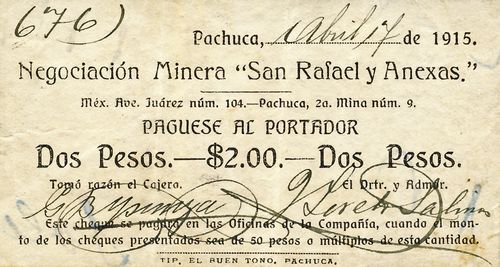 We know of cheques in two values ($1 and $2) dated from April and May 1915, signed by G.B. [    ]ya[identification needed] as cashier (Cajero) and  J. Loreto Salinas as Director and Administrator.

These were printed by a local printer, the Tipografía El Buen Tono of Pachuca. They could be redeemed in the company’s offices at calle Mina 4,  Pachuca or Avenida Juárez 104, Mexico City in multiples of fifty pesos.

In response to de la Vega’s report, on 9 September the Secretaría de Gobernación replied that since these notes had not been authorized by the Primera Jefatura the government should grant the company a prudent length of time to withdraw themAGN, Fondo Gobernación Periodo Revolucionario, caja 93, exp. 36, folletos 8.