As we do not have the text of Cornejo's acuerdo of 21 August 1914[text needed], that referred in turn to an authorisation of 30 April, we do not know if this also authorised fractional currency.  However, earlier, on 3 May 1914 the Jefe Político in La Paz wrote to M. Salgado, the Presidente Municipal of Todos Santos, and the Subprefecto Político of El Triunfo about an issue of vales made in the capitalABCS, Hacienda, vol. 624bis, exp. 34, though on 8 May he told them that the order he had given that they be accepted as currency was now without effectibid.. So it is possible that the Cornejo administration first issued fractional vales before the higher value notes. 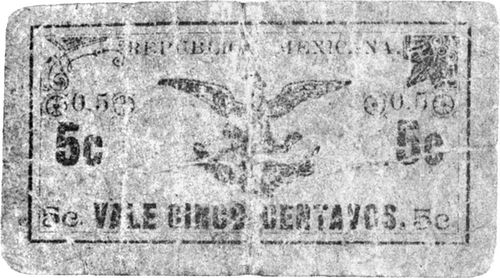 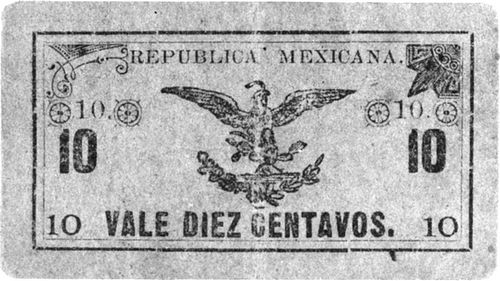 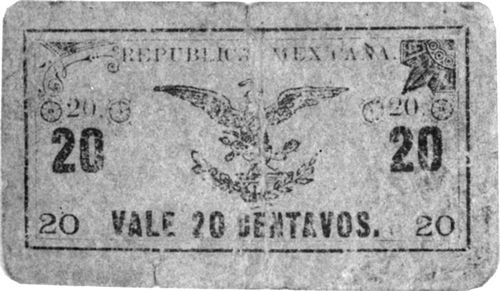 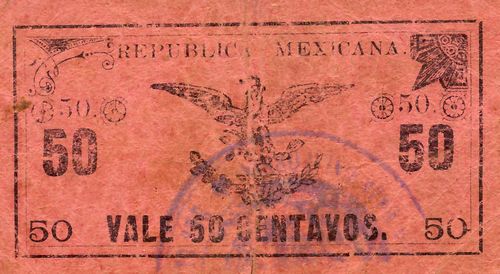 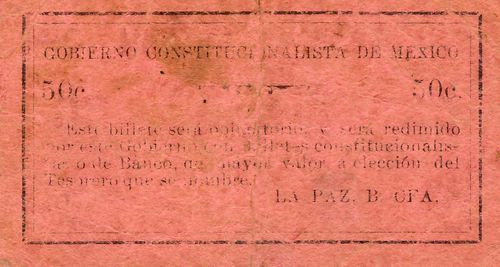 and also of a 50c cartón, with a slightly modified design. 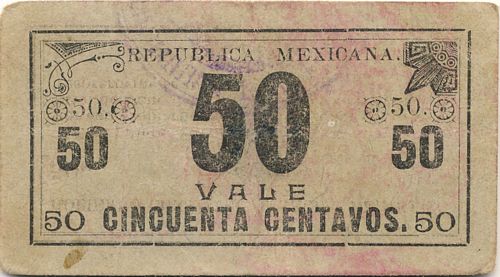 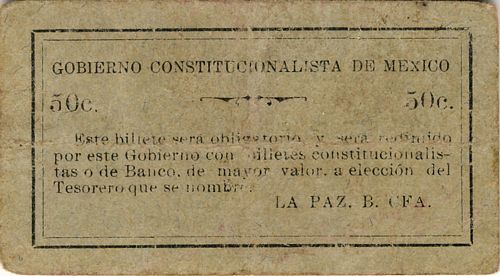 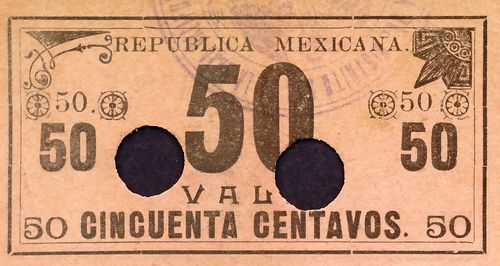 These are known either in pink, or in grey/ blue-grey,

so there might have been similarly modified designs for the other three denominations, and other colours.

Eduardo S. Carrillo was responsible for some commercial vales but we also have some references to an issue made in his official capacity as Jefe Político.

On 9 December 1914 a Carrancista force of 2,000 men, led by Ramón Iturbe, Angle Flores and Miguel L. Cornejo, left Mazatlán for La Paz and the next day took the city. Two days later the Carrancistas held a consultation to choose a Jefe Político. They chose Eduardo S. Carrillo, a distinguished businessman who had been affected by the forced loans that the Villistas had made. On taking office on 14 December Carrillo proposed that Carrancistas and Villistas consider the district of Baja California del Sur a neutral zone. Eight days later the Carrancistas withdrew to Topolobambo and Mazatlán, more because of the need for troops in Sonora rather than Carrillo’s political acuteness, and Carrillo made peace overtures to the Villistas holding out in El Triunfo.Carrillo was Jefe Político until January 1915.

However, it is as yet unknown how Carrillo's vales differed from the others issued by the Jefatura Política.

On 11 February 1915 the Presidente Municipal of San José del Cabo, probably prompted by receiving Ortega’s decree nullifying the Cornejo notes, wrote to La Paz asking what to do with the 10c, 20c and 50c (sic) notes that were split, worn and illegible as people were refusing them. He was told to deposit them in the Aduana Marítima to be exchanged, when circumstances permitted, but only if they had the Jefatura’s seal and no other signatureABCS, Gobernación, vol. 642, exp. 150. The next day the Presidente Municipal Interino of Todos Santos, Valente Salgado, also asked about notes that, for the most part, lacked a seal and were in a poor stateibid.. He was told to send vales without a seal to the Jefatura Política, to await instructions, giving a receipt to the holdersibid..

At some time a circular had fixed that these vales should be accepted in payment for at least 20% of any amount due. However, on 23 March Ortega, after meeting with local businesses, published his decree núm. 6, stating that the vales (and others issued to replace any deteriorated notes) would be of forced circulation throughout the District.

On 12 April a meeting of businessmen told Ortega that the vales were still held by workers and employees but their certain suppression would improve the economic climate. Ortega agreed to publish the disposition he had agreed with the businessmen. Manuel Avilés proposed that each business offer some goods to relieve the problems caused by the sudden suppressionibid..The same day Ortega issued his decree núm. 10 withdrawing the valesABCS, Gobernación, vol. 642, exp. 150 and Gobernación, vol. 648, exp. 106.

On 28 April 1915 Enrique R Cota, the Presidente Municipal of Todos Santos reported that no vales remained in the public’s hands as they had all been collected by businesses, to exchange for bonos, and the businesses had been authorised to issue vales, for purely local use, with the stamps of the business and of the ayuntamientoABCS, Gobernación, vol. 642, exp. 150.

Urbano Angulo had collected Cornejo notes and cartones in the first days of his command, when he distributed provisions to the poor. On 23 March 1916 he sent General Obregón, in Querétaro, two boxes containing 54 packets, totalling $17,298, asking him to destroy them as they were of no value. The contents wereABCS, Hacienda, vol. 658 1/2, exp. 5: