On 2 March 1915 the local council of Mulegé decided that to remedy the shortage of small change the Tesorería and some businesses should issue provisional vales for 5c, 10, 20c and 50c, to a total value of $200. On 9 March Carlos Nuño, the Comisionado de Mercados, suggested a particular shape and design in cowhide (baquetilla). Each merchant who was authorized to issue vales, would do, if possible, in a different coloured baquetilla and if this was not possible, at least the ink that marked the value, was different from the others with the letters be about half a centimetre to be more easily visible.  He suggested $100 per business in the following quantities.

On 5 October 1915 the French mining company of El Boleo, in Santa Rosalía, wrote for permission for its issue of vales. The sum issued to date was $2,975, duly backed by notes in their strongroom, in a special account. As this was insufficient it asked to issue up to $5,000, in the understanding that they would be entirely local. Each note was signed, and counterstamped by the Aduana de Santa RosalíaABCS, Gobernación, vol. 642, exp. 150. The same day Angulo replied to the Director of the company authorizing it to issue vales to replace the small change, to the amount of $5,000 or more, if thought necessary. The sum would be guaranteed with banknotes, and the notes designed so that they could not be easily counterfeitedABCS, Gobernación, vol. 642, exp. 150.

We know of undated 10c and 20c[image needed] notes, designated for internal use. 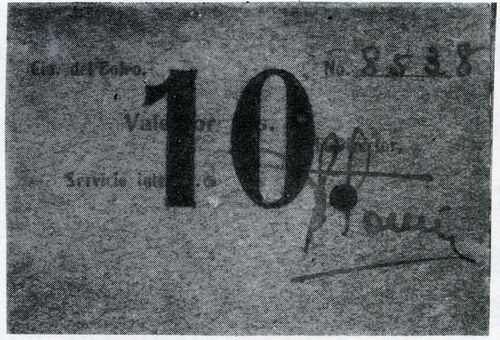 Again in March 1916 the workers at El Boleo went on strike, demanding to be paid in gold or silver coin. The director, Ernesto Michelot, replied that, as it was difficult to obtain coins, the company would pay in American money (so long as the government permitted it) and would make the next payday in banknotes (obviously meaning Constitutionalist issues) at triple the rateABCS, Gobernación, vol. 661. exp. 115 telegram of Jefe de Armas, Santa Rosalía, to Urbano Angulo, 24 March 1916. Angulo was reluctant and offered to send Constitutonalist currency, but the company said that this was unacceptableABCS, Gobernación, vol. 661. exp. 115 telegram Ernesto Michelot, Santa Rosalía, to Urbano Angulo, 3 April 1916. On 7 April Angulo himself arrived in Santa Rosalía to settle matters, and decided to make the next payday on 9 April with vales (vales que representen el valor de salarios que deberían recibir en moneda constitucionalista and vales girados contra la caja de esa compañía por la representación de su valor) as the total payroll was a little more than a million pesos and the existing paper currency could not cover itABCS, Gobernación, vol. 661. exp. 115 telegram Urbano Anulo to Ernest Michelot, [ ] April 1916 and telegram of Urbano Angulo, Santa Rosalía, to Alvaro Obregón, 8 April 1916. On 24 April Alvaro Obregón agreed that the company could pay its wages in gold and silver Mexican coinsABCS, Gobernación, vol. 661. exp. 115 telegram Alvaro Obregón to Compañia “El Boleo”, 24 April 1916 so the vales might have been a one-off.

The company minimized its losses by paying their taxes with what they collected in their tiendasABCS, Gobernación, vol. 661, exp. 115 letter Jefe del Ejército Constitucionalista to Director of El Boleo, Santa Rosalía, 16 April 1916.