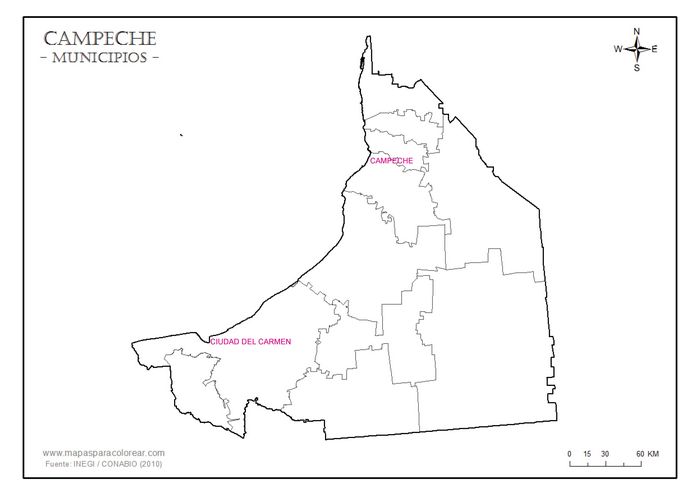 A couple of Chambers of Commerce issued cheques to alleviate the shortage of small change during the revolution. 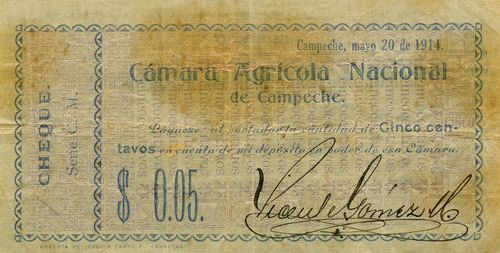 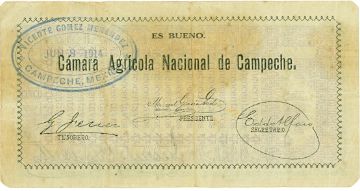 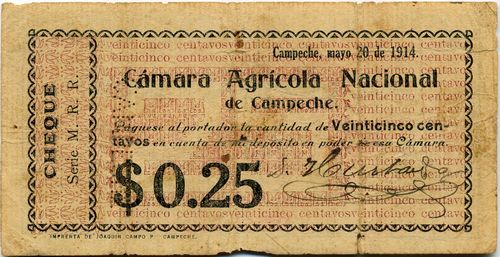 The Cámara Agrícola Nacional de Campeche produced two series of cheques, printed by a local firm, Imprenta de Joaquín Castro. These were issued by different businesses that had deposited a sum to guarantee them with the Cámara. They had a distinguishing series and signature on the face and the printed signatures of Manuel García Gual as Presidente, G. J[       ][identification needed] as Tesorero, and [               ][identification needed] (or, for the second issue, Eduardo Alfaro Lara) as Secretario of the Cámara on the reverse.

This was during the Huertista governorship of Manuel Rivera, who had the support of the members of the Cámara Agrícola Nacional as he could maintain order after the upset of Madero.

These notes were withdrawn once the Constitutionalists had taken over and introduced their own currency. In September 1915 the Jefe de Hacienda reported that the Banco Peninsular Mexicano had taken in $11,656 and his own Jefatura had collected $19,034. These, together with the unissued $2,525, making a grand total of $33,215, were incinerated in the patio of the Aduana Marítima on 13 September 1915ibid.. So $1,577 was still outstanding.

Ciudad del Carmen is a city in the southwest of the state. 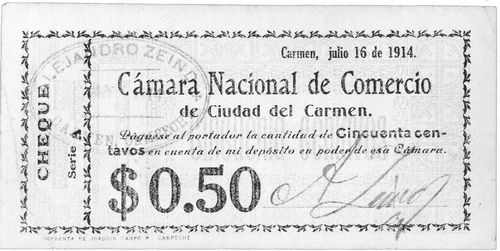 The Cámara Nacional de Comercio in Ciudad del Carmen made a similar issue to the Campeche one. The known example is a 50c cheque, from Alejandro Zeind, dated 16 July 1914.