The Carrancista forces, under the command of General Jesús Agustín Castro, entered Chiapas in September 1914 and on 14 September Castro assumed command as governor and military commander of the Gobierno Preconstitucional. His government made two issues of cartones.

The first issue, dated 28 December 1914, was the result of a decree on 26 DecemberPeriódico Oficial, tomo XXXI, suplemento al núm. 120, 26 December 1914. This established a Caja de Cambio, as a section of the Tesorería General del Estado, whose operations would be guaranteed with the Tesorería’s interest and with funds received in exchange for fractional currency. The Caja would issue $100,000 in four denominations, which would be of obligatory acceptance in all kinds of payments, including federal taxes. Anyone who wanted to exchange the new notes for ones of greater value could do so at the offices of the Tesorería General or any office de RentaArchivo de la Secretaría de la Defensa Nacional, Revolución, exp. XI/481.5/51: El Dictamen, Veracruz, Año XVII, Núm. 1377, 1 January 1915. 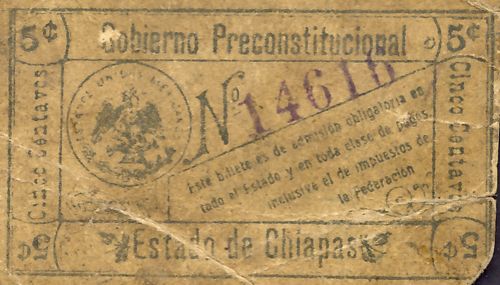 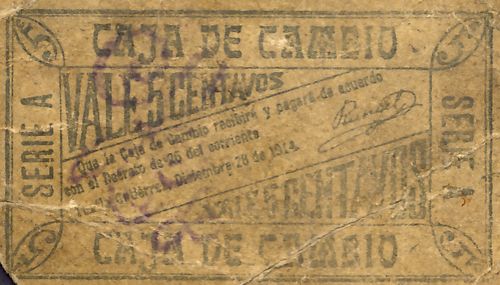 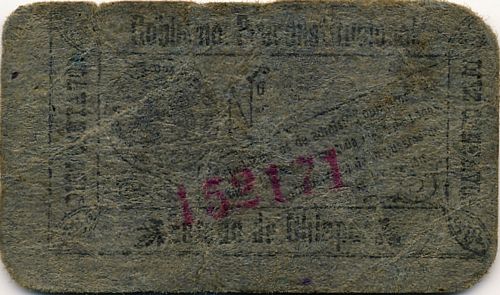 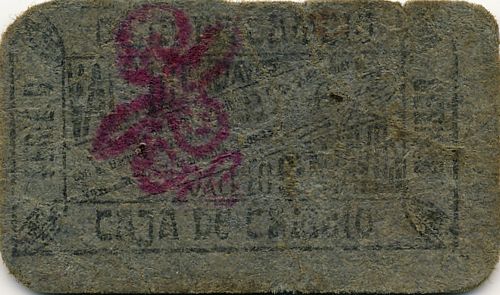 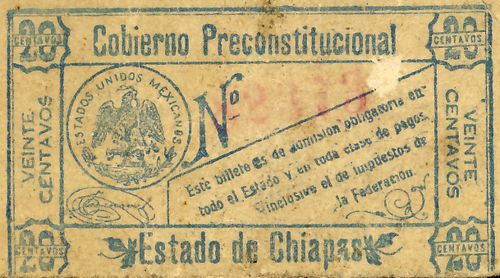 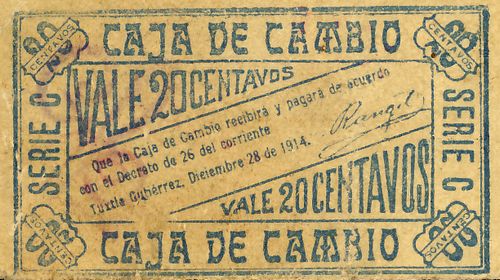 The text on the face is ‘CAJA DE CAMBIO VALE   CENTAVOS Que la Caja de Cambio recibirá y pagara de acuerdo con el Decreto de 25 del corriente Tuxtla Gutierrez Diciembre 28 de 1914 VALE    CENTAVOS’ and on the reverse ‘Gobierno Preconstitucional Este billete es de admisión obligatoria en todo el Estado y en toda clase de pagos inclusive el de impuestos de la Federación’. The decree stated that the notes were to carry the signatures of the Secretario General de Gobierno and the Tesorero General del Estado, and in fact the former, of Teniente Coronel José C. Rangel, is is in the central diagonal on one side and the latter, of Capitán 1o José P. Casanova, is under the seal on the other.

On 24 July General Brigadier Blas Corral, while governor, noting that the central government was now sending regular consignments of small denomination paper currency to the state, which would soon alleviate the present difficulties in transacting business, no longer recognised the need for a local issue and so rescinded the May decreePeriódico Oficial, num. 49, 28 July 1915.

Blas Corral was too hasty, problems continued and so on 10 September, making use of an authorization that he had received from the Secretaría de Hacienda y Crédito Público on 22 July, by his decree núm. 44Periódico Oficial, tomo XXXII, núm. 62, 11 September 1915, he reinstated the issue of $100,000 in denominations of less than one peso. The cartones would carry the date of 12 May. 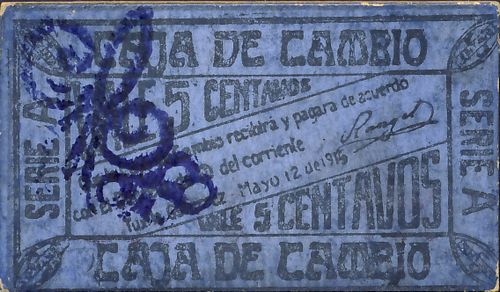 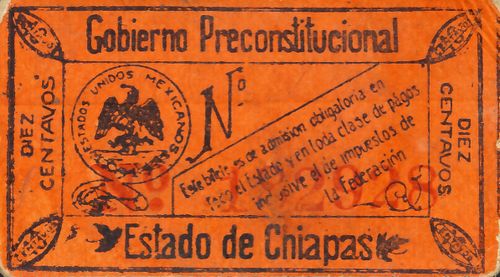 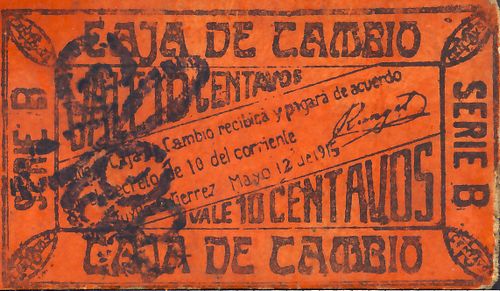 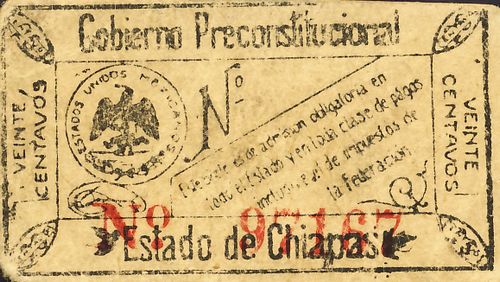 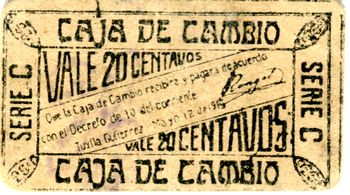 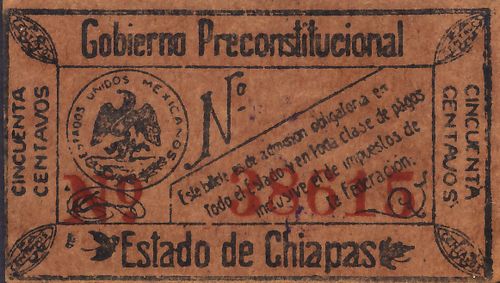 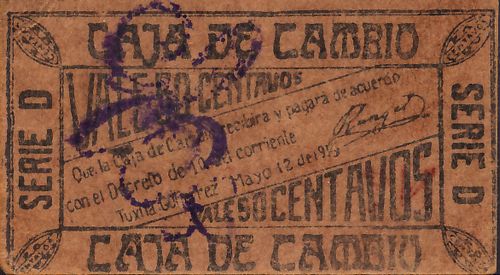 It appears that the government printed the cartones in May but did not use them because of the poor state of the printing. The cartones would allow the government to retire the Gobierno Provisional de México issue which had been withdrawn by Carranza but which could not be replaced because of a lack of fundsEl Regenerador, Tuxtla Gutiérrez, Tomo I, Núm. 28. 2 September 1915.

On 23 September 1915 Blas Corral decreed (decree núm. 45)Periódico Oficial, tomo XXXII, núm. 65, 25 September 1915 that, because of the poor state of the original cartones (of 26 December 1914) from that date until 31 October such cartones would be exchanged for notes or cartones of legal tender in the Caja de Cambio in the Tesorería General del Estado and in all the Oficinas de Hacienda, and subsequently incinerated. Notes in good condition would be exchanged when the government decided.

On 13 May 1916 $15,392.75 in cartones of the first issue were incinerated in San Cristóbal Las Casas in the presence of Ramón Rabasa hijoEl Regenerador, Tomo II, Núm. 97. 25 May 1916. Then on 21 May $32,030,60 of the same issue were destroyed in Tuxtla GutiérrezEl Regenerador, Tomo II, Núm. 97. 25 May 1916 Interim governor José Ascención González; Secretario General José C. Rangel and Tesorero General José P. Casanova attended the incineration.

Next, on 19 June, Blas Corral decreedPeriódico Oficial, tomo XXXIII, núm 41, 21 June 1916: El Regenerador, Tomo II, Núm. 105. 22 June 1916 that notes of the second issue would continue to circulate at a rate of ten to one in relation to the infalsificables, but would be exchanged in the Tesorería General, Colecturías and Sub-Colecturías de Rentas del Estado, from 15 July until 1 September, after which date it also would be null and void.

The two larger values were authorised by Castro's 10 May decree, which was then rescinded, and are not mentioned in any reporting, so they were obviously never issued.

However, an example of a $2 note exist.

This is of a simple design, with a portrait of Chiapan hero and martyr Belisario DomínguezBelisario Domínguez was born in Comitán. He studied in San Cristóbal de las Casas and the Sorbonne, Paris, France, where he obtained, on 17 July 1889, the title of Surgeon and Midwife. He returned to Mexico and set up his practice in Comitán. He was an active member of the Liberal Party in Chiapas, and with the founding of the newspaper El Vate, where he published articles against President Díaz and the Porfirista governor, Rafael Pimentel. In 1909 he was elected municipal president of Comitán, and in 1912 was proposed as a candidate for senator, although he preferred to participate in the elections as an alternate for his friend Leopoldo Gout, where they won by a huge margin.
At the beginning of 1913, he moved to Mexico City, where he witnessed the events of the decena tragíca. A few months later, Senator Gout died and Belisario Domínguez took office, and was a constant critic of Huerta, whose regime he consistently opposed. On 23 September 1913, he made a coruscating attack on Huerta, which was subsequently published, and is credited with the loss of his life. On the night of 7 October he was taken from his hotel room and taken to the cemetery of Xoco, in Coyoacán, where he killed by several bullets. His executioners buried the naked corpse, and burned the clothes with oil. His assassination was a decisive factor in the fall of the regime of Huerta, who a few days later dissolved Congress and imprisoned 90 deputies. on the left and the Aztec calendar on the right, reference to the decree and the signatures of José C. Rangel as Secretario General de Gobierno and José P. Casanova as Tesorero General (as laid down in the original decree). 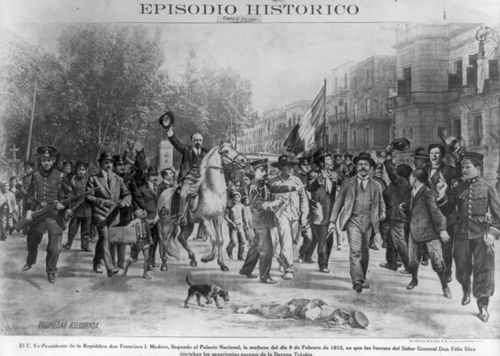 The vignette on the reverse is from an image entitled “Historic Episode: Ex-president of the Republic Francisco I. Madero arriving at the National Palace the morning of 9 February 1913, when the forces of General Félix Díaz began the bloody events of the Decena Trágica.” It is a composite made from photographs and drawing, published in 1913 and copyright Robert RunyonLC-USZ62-96389 in the Library of Congress, Washington, D.C.. The text on the reverse reads 'ESTE BILLETE ES DE ADMISION OBLIGATORIA EN TODO EL ESTADO Y EN TODA CLASE DE PAGOS, INCLUSIVE EL DE IMPUESTOS DE LA FEDERACION'.

It is unknown whether these were legitimate models or merely something spurious.