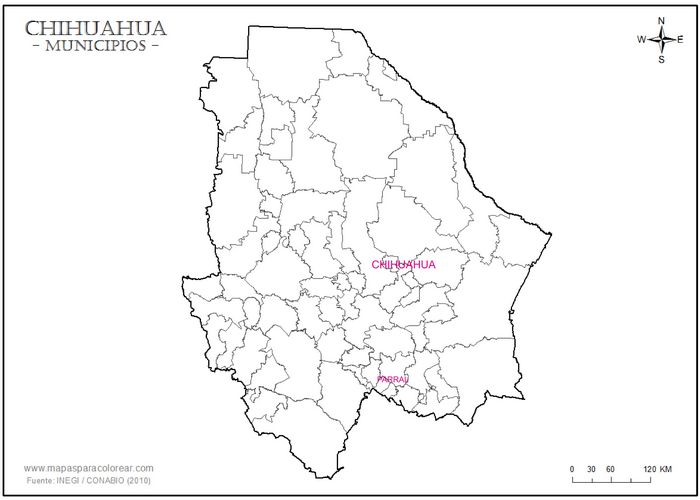 Hidalgo del Parral is a rich mining town 140 miles south of Chihuahua on the border with Durango.

The Banco de Hidalgo del Parral was apparently established there as a private bank around 1880 by a group under Samuel Miller. It was given official approval and authorised to issue notes on 4 January 1883[text needed]. The first authorisation was for 300,000 pesos in twenty-five centavos, fifty centavos and one peso notes payable in legal tender or in silver pesos at an 8% discount (en moneda corriente ó en pesos fuertes de plata con el ocho por ciento de descuento) and 200,000 pesos in five and ten pesos notes payable in Mexican coins (en pesos fuertes del cuño mexicano) though far fewer than these totals were put into circulation. Such notes as were issued had to bear the seal of the Administrador General de Rentas and be guaranteed by mortgages on property. The bank had to start operating within six months of the date of the concession for it to be validPeriódico Oficial, 20 January 1883. 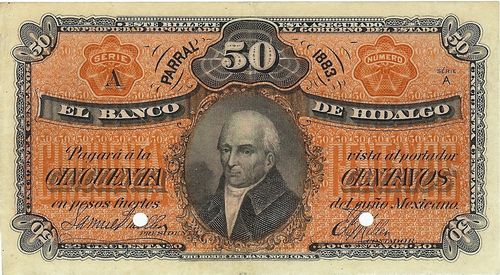 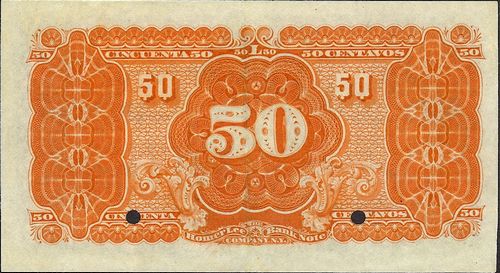 The two signatories are Samuel Miller as President and E. C. Miller as Accountant (Contador). 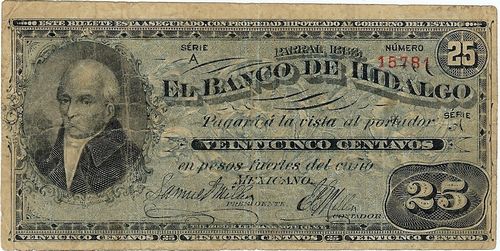 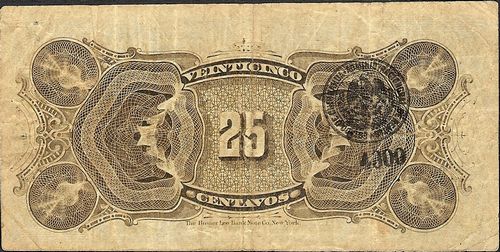 Dick Long has suggested that the number with the Administración de Rentas seal represents the (total) number of notes issued to date in pesos. 00001 is an error for 1000. 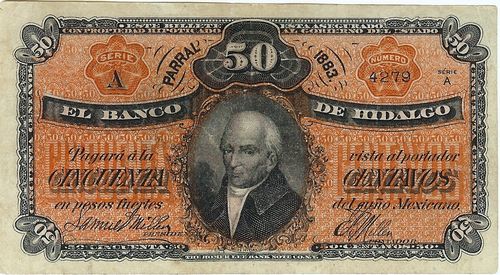 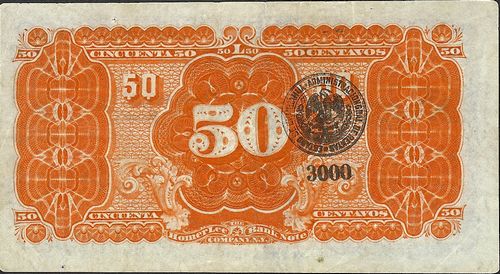 Again, Dick Long has suggested that the number with the Administración de Rentas seal represents the (total) number of notes issued to date in pesos. 0001 is an error for 1000.

There ia a remarkable lack of references to the bank’s notes. For example, on 18 April 1884 the Tesorero Municipal wrote to the local council that some businesses wanted to pay their taxes not in copper coins, which they did not have, but with banknotes (billetes de banco). There were banknotes in circulation in the city, but they were not of forced circulation and only payable in the state capital, so he was writing for instructions. The council gave its approval to accept banknotes on 2 MayAMP, Gobierno, Jefes o Prefectos Politícos, Informes, caja 108B, exp 13. Again, when the Presidente Municipal wrote to the government on 6 July (see below) he said that banknotes were in discredit because agencies only changed them in quantities greater than one peso, and then at a discount of 9 3/8% for silver (pesos furtes) while the rate should be 8% AMP, Tesorería, Tesorería, Minutarios ,caja 37, exp. 23 letter to Presidente and Vocales of Ayuntamiento, 10 October 1884 and on 10 October 1884 the Tesorero Municipal remarked that the banknotes they were receiving represented moneda de cobre á la par, whilst the taxes should be paid in en moneda de plata ó su equivalente en otra clase de moneda al cambio del díaAMP, Gobierno, Jefes o Prefectos Politícos, Actas, A00-183-015. Since the known notes of the Banco de Hidalgo del Parral are in pesos fuertes and payable in Parral, it would appear that the majority of notes in circulation (for legal tender, i.e. copper coin, or silver with an 8% discount (en moneda corriente ó en pesos fuertes al 8 por ciento de cambio) were from the other Chihuahuan banks (or the Banco Nacional de México).

On 25 April 1884 the Presidente Municipal, Anastasio Porras, wrote to the Governor about the problems caused by the lack of small change, the consequence of the withdrawal of the copper coinage and the public’s refusal to accept the new nickel coinageAMP, Gobierno, Jefes o Prefectos Politícos, Informes, caja 108B, exp 13. On 30 April, following the precedence set in Chihuahua the Governor authorised the local bank, the Banco de Hildalgo, to issue $5,000 in 1c, 5c and 10c notes, providing that it took precautions to ensure that the notes were not counterfeited and that the Administración de Rentas counterstamped each note before issueAMP, Gobierno, Jefes o Prefectos Politícos, Actas, A00-183-015.

At its meeting on 2 May the local council discussed the Governor’s reponse. The Presidente Municipal said that as the only bank in the city was that owned by Samuel Miller, they needed to talk to him and the meeting was suspended whilst two members went off to ask him but they returned saying that they had found the bank closed so the matter was left in the hands of the Presidente Municipal. At the meeting on 9 May Porras reported that he had arranged with Miller for the bank to issue $5,000 in 1c, 5c and 10c notesibid..

However, on 28 June Porras reported to Chihuhuahua that they were in a real conflict because of the lack of small change and the complete discredit of banknotes (desprestigio completo de billetes por la misma causa), and that they desperately needed Miller’s notes (los billetes de cambio del Señor Samuel Miller) and, if possible, three or four thousand pesos in the old copper coins to replace the banknotesAMP, Gobierno, Jefes o Prefectos Politícos, Minutario, A00-183-017. In the next few days Porras repeated his plea, and on 6 July wrote with a fuller explanation. Banknotes were in disrepute because agencies only changed them in quantities greater than one peso, and then at a discount of 9 3/8 % for silver (pesos fuertes) while the rate should be 8%. The poor workers were obliged to buy more than they needed because they only had banknotes and there was no change. He reitered his call for the government to reissue some previously amortized copper coins and for the Banco de Hildago’s 5c and 10c notesibid..

So it seems that steps were taken to prepare 5c and 10c notes but that, for some reason, they were never put into circulation. Certainly no examples have survived.

The bank was always quite small, even insignificant: in the Memorias de Hacienda of 1884 and 1885, the federal government reported that it had no official notice of the rights and functions of the bankNoel Maurer (The power and the money: the Mexican financial system, 1876-1932, Palo Alto, CA., 2002) reports that the bank was purchased in 1885 by Enrique Müller and the Banco de Chihuahua, and Beatriz Rojas ( ) says that they saved Miller and the Banco de Hidalgo del Parral from bankruptcy in that year. By an agreement[text needed] on 13 October 1888 the Secretaría de Hacienda y Crédito Público declared that since the bank could not conform with banking legislation its existence was illegal and gave it six months to call in all its notesVoz de Mexico, 7 November 1888: El Siglo Diez y Nueve, 12 November 1888. The bank’s directors had to produce a list of the notes in circulation within two weeks, and make public announcements of their intention to withdraw their notes. They then had to give a weekly report to the Secretaría of the number of notes cancelled. At that time the bank had several thousand pesos in circulationEl Abogado Cristiano Ilustrado, 15 December 1888. This timelimit was extended for another three months on 11 April 1889El Estado de Chihuahua, Año XII, Num 70, 20 April 1889. 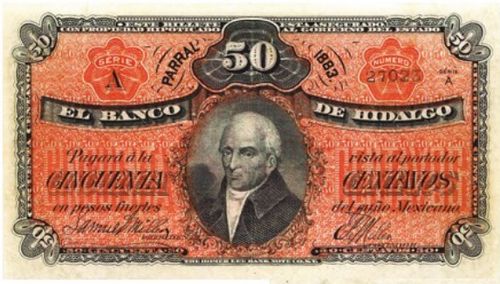 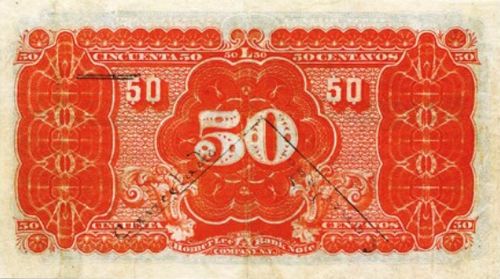 On 28 March 1890 Samuel Miller informed the public that the bank had in fact ceased operations on 23 October 1888 and had redeemed all but $907 of its notes. It had deposited this amount in the Banco Minero and the latter bank would redeem any notes presented before 1 April 1891El Monitor Republicano, 15 May 1890.

There was a surprising news item in the Chihuahua Enterprise of 10 August 1907.

SECOND OLDEST BANK BILL ISSUED IN STATE. The Banco Minero has taken in a $10 bill of the Banco de Hidalgo in Parral, the first bank ever started in this state. This bill is No 2, therefore the second bill ever issued. Its date is 1883. The bank was founded by Enrique Miller, a wealthy hacendado who died here a number of years ago. His descendents have had on deposit in the Banco Minero for a number of years money to buy one or more of these old bills which they wanted to get hold of and hold in memory of the founder of the bankChihuahua Enterprise, 10 August 1907.

The article confirms that the $10 note was actually issued and that the bank's notes were still redeemable in 1907.