There are four references to possible counterfeit notes.

The first mention is a court case against Manuel Hernández y González in March 1893 for circulating counterfeit banknotes of the Banco Minero. However, only the merest correspondence remains so no details are available and it is possible that the defendants tried to pass off counterfeit notes of another bank on the Banco MineroASCJ, Asuntos civiles 179/1893.

In November 1901 U. S. Secret Service agents in El Paso arrested M. J. Lemon, a local photographer, and captured a large number of photographic plates bearing, among others, imprints of $5 silver certificates, $10 national and local bank notes and notes of the Banco Nacional, Banco de Londres y México and Banco Minero, as well as a large number of unfinished notes. However, the Banco Minero had no record of any of its money being floated, so Lemon probably did not get so far as producing any Banco Minero notesSan Francisco Chronicle, 8 November 1901.

The third reference to a ‘forged’ Banco Minero note was when in December 1913 someone in Hidalgo del Parral tried to pass a $10, number 101932, that had been altered to read ‘$100’AMP. details from Jesús Vargas Valdez. 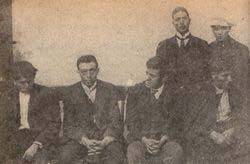 The fourth was a largescale counterfeiting of the notes printed in Mexico City in 1914. In December of that year police in Mexico City uncovered a massive operation forging $10 Banco Minero de Chihuahua notesThe New York Times said that there were up to $2m in counterfeit notes (New York Times, 21 December 1914). Three well-known criminals, Francisco Oviedo (alias Carlos García Guzmán), Bernabé Fernández, known as “El Chato”, and Enrique Díaz Velasco and a printer, Armando Salcedo, had produced a million pesos in false notes. The notes were easily recognizable as the paper was of poor quality and both front and back designs appeared blurred (borrado)El Monitor, 19 December 1914. The article has a reproduction of one of the counterfeit notes ($10 F29 19 May 1914 102170 control S-5245).

They had been made from photographic reproductions and, because of this, lacked the ‘DIEZ PESOS’ in the bottom centre backgroundEl Monitor, 30 December 1914.

Salcedo lived at Calle de San Felipe 47 and was the original counterfeiter, making a great number of the Chihuahua notes. The other men, anxious to get his plates and as many notes as possible, went to his house pretending to be detectives employed by the government and made him give up all the objects which he had in his possession.

The police said that between the four men as many as $2,000,000 worth of the Banco Minero notes were made and put into circulation. The counterfeits attracted the attention of Chief of Police Alessio Robles as soon as he went into office and he sent out Detectives Guillermo Carricarte and Solorzano to work on the case, with the result that they succeeded in running down the counterfeiters. Salcedo was the first man arrested. He did not know the names of the other men and never saw anything more of them after they had robbed him but his descriptions enabled the police to identify and find them without difficulty.

On 18 December all four were arrested on the charge of counterfeiting, and the last three were also charged with robbery and impersonating the policeThe Mexican Herald, 19 December 1914.

Juan Creel, from El Paso, sent a cutting of the article in El Monitor to his brother Enrique in Los Angeles and on 30 December 1914 Enrique replied, saying that he thought the figure of $1m was exaggerated, but it would still add to the lack of confidence in the bank’s notes. He enclosed a copy of the contraseñas that all the Bouligny & Schmidt notes had and suggested copies be forwarded to Francisco C. Terrazas and the Banco Nacional de México. He suggested it would be convenient to withdraw all the Bouligny & Schmidt notes and replace them with American Bank Note Company ones, but felt that the Secretaría de Hacienda might objectCEHM, Fondo Creel, 119, 30706. However, on 25 January 1915 Creel had to admit that the American Bank Note Company notes were held up in transit from New York and so a recall was impracticalCEHM, Fondon Creel, 134, 34305, letter to Francisco C. Terrazas, Mexico City.

On 28 December 1914 Capitan Antonio Flores Menchaca arrested Benito Arteaga and Francisco Llaguno with $75,000 in counterfeit notes. They had approached Menchaca, as interventor, to bribe him to revalidate the notes which they had freely admitted were false. They had been made with the clichés used to print notes during the Huerta regime and the main differences were that the paper was inferior and the ink paler (más pálida) whilst in the genuine the paper was glossy and better made (satinado y mejor impreso) and the ink bright (súbida)El Monitor, 29 December 1914: El Monitor, 30 December 1914. The articles confirm that these were Banco Minero notes but does not explain why the counterfeiters were wanting a resello..