Banco Minero issues during the revolution

The directors of the Banco Minero, apart from Luis Terrazas hijo, joined Mercado in his retreat to Ojinaga. They then moved to El Paso, where bank officials set up new quarters. The bank also continued to operate in Mexico City, through the good offices of the company 'Creel Hermanos'. Creel Hermanos was a private banking firm established in February 1911 by Luis Creel and Enrique Creel hijo, two sons of Enrique C. Creel, with Eduardo C. Cuilty also involvedEl Paso Herald, 14 January 1911. In July 1911 it was located at 2a calle de Capuchinas, No. 43, Mexico City. It was 'intervened' on 24 September 1914 by order of the Governor of the Federal District, General Jara (CEHM, Fondo Creel, carpeta 149, legajo 38352). In June 1916 it was accused of being a hotbed of speculators (madriguera de “coyotes” a la alta escuela). A newspaper reported that it was repaying its depositors in Veracruz currency, at the rate of one peso in paper money for every peso in silver. As the paper money was worth 2c oro nacional, thousands of people who had worked hard over many years to build up their savings, were being defrauded(acción mundial, Vol 1, Num. 49, México, 14 June 1916). It was still in existence in 1936.
On 5 October 1915 Francisco C. Terrazas sold calle de Capuchinas, No. 42 to a German, Walter E. Herrmann. On 8 November Asesor Cecilio Garza González, on Pablo González’s orders, searched the house to collect all safes, canceles, papers and other things belonging to Enrique C. Creel and render an account to Cuartel General. The German legation complained, but to no avail, as González said that none of Hermann’s belongings were taken (APGG, leg. 7, exp. 74)..

During the first eight months of 1914 the Banco Minero increased the value of notes in circulation almost exponentially, from $4,796,449.95 in November 1913 to $14,405,390.00 in October 1914. This was facilitated by Huerta’s legislation: on 7 January 1914 Huerta changed the proportion of underlying funds needed to support the value of notes in circulation from 50% to 33%, and on 30 March he gave the banks the right to issue notes up to 90% in value of the federal bonds that they had had to take up.

The notes were shipped from the American Bank Note Company in New York to offices in Veracruz, overprinted with signatures, revenue stamp and Secretaría de Hacienda seal in the Oficina Impresora de Estampillas, and held by the Banco Central until releasedCEHM, Fondo Creel, 92, 23566. Details of these consignments were: 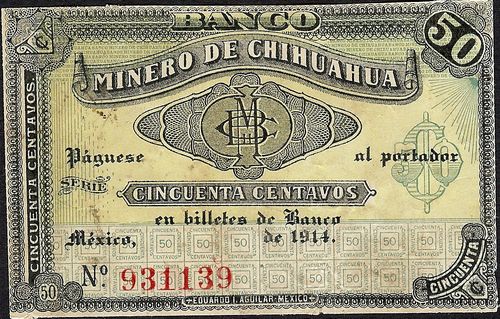 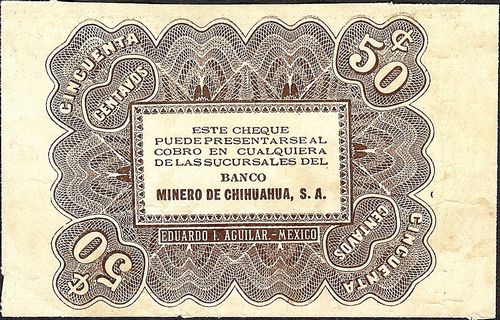 The situation with small change had grown so serious by 30 March 1914 that Huerta issued a decree allowing the Secretaría de Hacienda to authorise individual banks to issue 50 centavos notes guaranteed by their equivalent in gold or silver legal tender.

By February 1914 the Banco Minero had already been considering issuing a 50c note as they discussed the matter with the American Bank Note Company. On 27 February its head office wrote to Charles Blackmore, its agent in Mexico City, “We have discussed this matter with Mr. Gibbs [foreign department] and have thought it better to refrain from making this design until we know whether the Banco Oriental had been successful in securing permission to issue 50 centavos notes, because it seems to us that if they cannot obtain authority to issue notes of this small denomination neither will the Banco Minero be able to issue them. If, after we have submitted the Oriental models, Mr. Collada finds that he can issue these notes, we will of course prepare the model for the Banco Minero. This is only an idea on our part which we thought would perhaps save our going to any unnecessary expense. However, if you think that Mr. Creel is expecting a model and would be annoyed if he did not receive one, we will of course make up a design. Please let us know what you think"ABNC. On 23 March Blackmore asked the company to prepare a model and the next day the company wired back "Banco Minero, Chihuahua printed 50 centavos bank note in 1888. Are sending proofs and prices this mail. Shall we prepare new models?"ABNC. However, Enrique Creel was getting annoyed with the ABNC because it was trying to get payment in advance and for this reason, and no doubt because of the time restraint, went to a local Mexico City printer, Eduardo I. AguilarBesides printing books, Aguilar also produced two illustrated magazines, El Mundo Ilustrado and La Semana Ilustrada. They produced a note, payable ‘al portador en billetes de Banco’, but it was never issued. On 29 June it was reported that banks had given up the idea of issuing 50 centavos notes because the Comisión de Cambio had been able to acquire a large quantity of silver and was minting 10c, 20c and 50c coinsEl Imparcial, 29 June 1914.

Besides the 50c Banco Minero de Chihuahua, Aguilar printed two other ill-fated notes: a $1 dated 31 July 1914 for the Banco de Morelos and a $1 for the Banco de Zacatecas. On 29 September 1914 the newpaper El Liberal reported that the day before a Mr José Campero had been taking an inventory of the printers on behalf of the authorities. Having made a detailed inventory of all the stocks of paper, inks, presses, linotype machines and accessories, he opened the door to a darkened cellar and was surprised to find several wooden boxes full of brand new banknotes. There were 1,200,000 $1 Banco de Morelos and nearly 300,000 $1 Banco de Zacatecas, lacking only signatures and the Secretaría de Hacienda validation. The police were informed and took away eveything, including the plates used to print the notesEl Liberal, 29 September 1914. By an ironic coincidence, on the same day, 29 September, Andrés Padilla, a lithographer for Eduardo Aguilar, wrote to President Carranza, complaining that the forced closure of the printshop had thrown all out the employees onto the streets without hope of work. The reason the authorities had given for the closure was the fact that Eduardo Aguilar had printed some banknotes, and Padilla asked that loyal supporters who only wanted stability, peace and work should not be punished soCEHM, Fondo XXI, carpeta 16, legajo 1626). So it seems that none of these three issues ever made it to circulation and Aguilar had his business closed down for his pains. A newspaper report from Mexico City mentions $1,000,000 in 50c notes found at Aguilar’s premises, just needing to be validated before entering circulationRegidor, 4 November 1914. If these were these Banco Minero notes, this suggests that two million were printed.

The bank also produced three other denominations printed by companies in Mexico City. The $2 note was printed by the American Book & Printing Company whilst the $5 and $10 notes were printed by Bouligny & Schmidt of 1a Nuevo México 22.

All these (totalling $5,030,000) are listed in the bank’s records as being issued to the account ‘Por Creel Hermanos c(uenta) esp cir’.

On 2 March 1915 Ismael M. Ruiz wrote from Nogales that the banks there were distinguishing between the old ABNC notes and those printed in Mexico City in 1914 (called ‘blancos’), refusing to accept the latter. The manager of the First National Bank there had told him that his head office was not accepting such Banco Minero notes. As there were so many Banco Minero notes he was worried that customers would take advantage of their depreciation to buy them and pay off their loans from the bankCEHM, Fondo Creel, 122, 31243. On 6 March 1915 he added that the Banco de Sonora and Banco Occidental had taken in almost all of their notes, but had the advantage that they had not issued ‘blancos’CEHM, Fondo Creel, 122, 31242.

In November 1919 a reader from Batopilas wrote to La Voz del Pueblo, in Ciudad Juárez, asking where and by whom Banco Minero notes were being redeemed since it had moved its offices to the United States, as he and other friends still had sizeable sumsCEHM, Fondo Creel, 238, 61040. On 11 November Juan A. Creel told the paper that the bank offices were at calle de Capuchinas No. 41, Mexico City, under the management of Francisco C. Terrazas, but that the bank’s notes, like notes of the other banks, were not being redeemed, due to the moratorium decreed by the federal governmentCEHM, Fondo Creel, 238, 60949.