Politics in Chihuahua became less violent with the victory of Díaz and, later in 1884, the completion of the Central Mexican Railroad, which not only connected the state with the rest of the Republic but also allowed the federal authorities quickly to dispatch troops. In May 1877 Governor José Eligio Muñoz commissioned the Secretaría del Gobierno to establish the size of the debt arising from the costs of the recent rebellion (excluding the créditos of the defeated administration). Once this was determined, Congress would decide how to amortise the debtEl Guardia Nacional, 10 May 1877.

People who had lent money or provided goods to the victorious regime presumably had receipts but as a receipt was not a negotiable instrument their investment was effectively frozen. It was therefore resolved to issue certificados in accordance with the receipts that were presented and confirmed. This on the one hand permitted the government to convert the debts and on the other gave to the creditors an official document that could be negotiable. 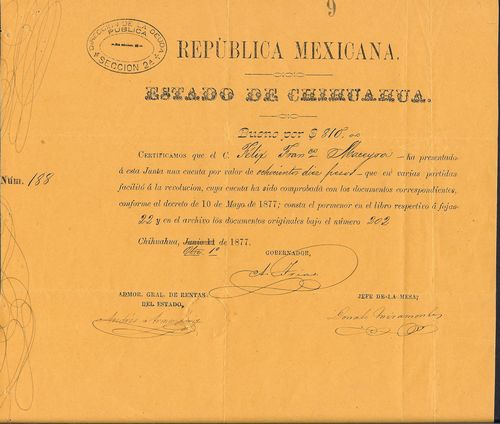 A short time after Angel Trias became governor in 1877 he made the Tesorería General del Estado establish the amount that was owed to creditors of the public treasury, mostly unpaid wages of civil servants and employees. The public debt was consolidated at $242,631·67 and titulos issued to creditors. In November 1877 Lauro Carrillo was allowing such bonos o créditos reconocidos to be used in payment of taxesEl Estado de Chihuahua, 12 November 1877.

In June 1889 Governor Carrillo set up a special section within the Tesorería General del Estado again to consolidate the outstanding debts. Creditors and holders of créditos had six months within which to present their claims and the section was given another four months thereafter to consider their validity. Then the Tesorería General would issue bonds (bonos al portador), such bonds to be in denominations of 10, 100, 500 and 1000 pesos, signed by the Governor, Tesorero and Contador, progressively numbered and recorded in a book kept in the TesoreríaEl Estado de Chihuahua, 29 June 1889. 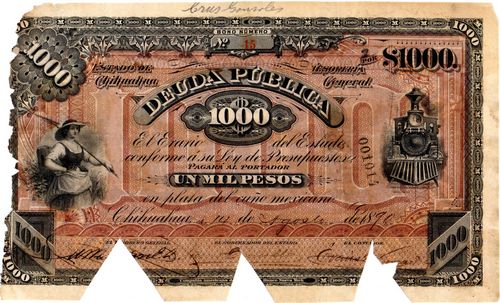 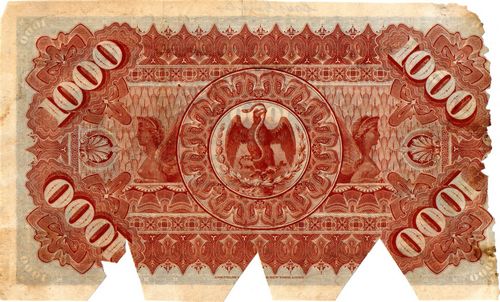 $18,240 in bonds were redeemed in September and October 1892. However, claims against the Tesorería continued to mount and in December 1894 under Governor Miguel Ahumada the whole process was repeated, though claims that had previously been rejected were excluded. This time the state was to issue bonds with the value of 10, 50 and 100 pesosEl Estado de Chihuahua, 28 December 1894. A year later the Congress acknowledged the outstanding debt to be $50,143·43 and issued bonos to forty-two creditorsPeriódico Oficial, 1909 though later on it added Gaspar Horcasitas' claim for $2,385·75 and there might have been others.

On 14 March 1908 the Tesorero General, J. Lamelas, told holders of outstanding bonds issued in accordance with the decrees of 31 July 1890 and 14 December 1895 to present them for immediate payment, as they would be declared null and void as soon as the time was rightPeriódico Oficial, 15 March 1908.They had been all but redeemed by 1909, when only $2,780 was outstandingInforme of Governor Enrique Creel, 1 June 1909. 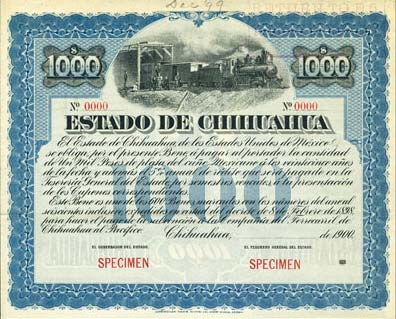 On 8 February 1898 Governor Ahumada decreed the issue of six hundred bonds of $1,000 each to subsidize the construction of the Chihuahua al Pacifico railway. The bonds offered 5% interest and were to be redeemed in twenty-five years. 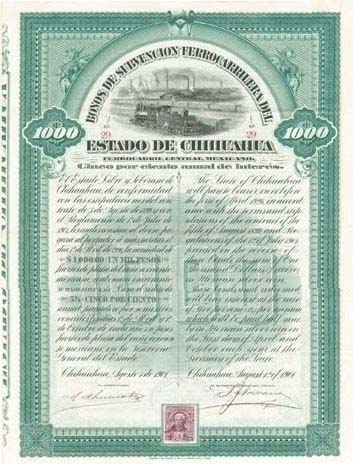 On 31 July 1899 the governor authorised a similar issue for the Central Mexicano railway for the line between Parral and the Chihuahua-Durango border.

On 14 November 1904 Governor Enrique C. Creel issued regulations on redeeming these bonds, which had reached the sum of $685,000. They were to be redeemed twice yearly by lot: redeemed bonds were to be perforated ‘Cancelado’ and destroyed after ten years.

In his Informe of 16 September 1911 Governor González reported that $6,000 in bonos ferrocarrlieros had been amortised since 1 June 1911 and that $487,000 was outstanding in the Subvención al Ferrocarril de Chihuahua al Pacifico and $63,000 in the Subvención al Ferrocarril Central MexicanoInforme of González, 16 September 1911.

We known of one issued $1,000 bond, numbered 545, dated 1 July 1900 and signed by Miguel Ahumada as Governor and Lorenzo Arellano as Tesorero General, whilst a 1913 reference mentions $100 Chihuahua al Pacifico and $100 Central Mexicano bonds.