For the fifty centavos, all of which are Series U, the sequence was:

500,000 notes printed by Maverick Clarke and dispatched on 8 May 1914. These had a round black/green Tesorería seal (applied at the same pass as Vargas’ and Muñoz’ signatures), and scalloped red Ejército Constitucionalista seal and red vertical Type 1 control letters, all on the face of the note.

These notes have larger printed signatures of Treasurer Vargas and Interventor Muñoz than the later 50c and the serial numbers are printed in a [ ] font, whereas the later issues were numbered in a [ ] font.

1,000,000 notes printed by Norris Peters under the 18 July 1914 contract and dispatched on 30 September 1914. The 50c notes were the last to be printed, with the plates ready by 1 September. On 27 August R. E. Navarro had sent a telegram to Ignacio Perchez Enríquez in Ciudad Juárez, asking permission to move Vargas’ signature to the left to make a better fitLG papers, 6-A-16, telegram from Navarro to Perchez Enríquez, Ciudad Juárez. 27 August 1914. By 1 September Navarro had still not received a response and so ordered that it should be reduced a little instead. They were then ready to start workLG papers, 6-A-21, report Navarro, Washington, to L. de la Garza, El Paso. 1 September.

These were Series U, 500001 to 1500000 and had a circular red Tesorería seal and serif Type 3 control letters on the back (slight change in font between F- and G-). Apart from J- the controls are pseudo-Roman numbers. 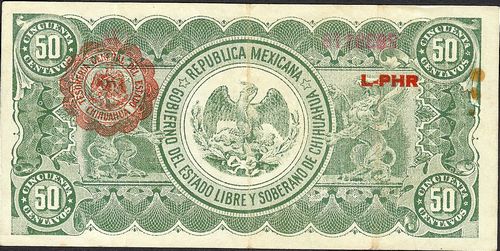 At least some were printed with Type 6v vertical letters. 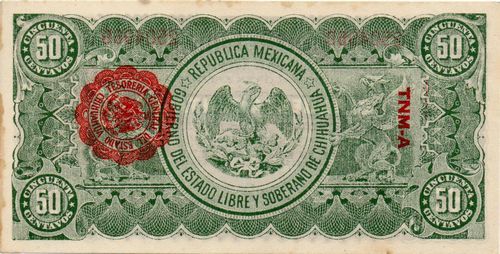 Some were printed with Type 6v vertical sans-serif letters (?)

or with Type 8v vertical sans-serif letters and date 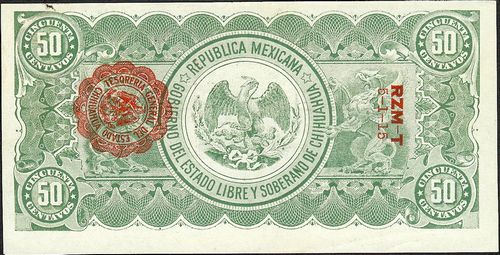 The February 1916 report to the Carrancista government, which only listed the Maverick-Clarke issues, states that they began to overstamp the 50c notes on 11 May 1915 and finished on 25 June 1915AGN, Fondo Gobernación Periodo Revolucionario, caja 61, exp 24.