Southern Baja California was rather a backwater during the revolution. The rebels captured La Paz in March 1914 and as soon as Miguel L. Cornejo was installed as Constitutionalist Jefe Político, Monclova and Ejército Constitucionalista notes began to circulate. But the quantities sent over were not enough, so Carranza authorized Cornejo to issue notes of $5, $10 and $20 and vales of 5c, 10c and 50c.

On [ ] Urbano Angulo ruled that the compulsory issue in the District was that of the Ejército Constitucionalista but because businesses and the general public possessed large quantities of other types of notes, such as the Monclova, dos caras, Brigada de Sinaloa, Estado de Sonora and Cornejo, he had decided to permit their circulation, with the resello of the Jefatura Política or corresponding Presidencia Municipal, with the exception of the Villista notesABCS, Gobernación, vol. 642, exp. 150. He set a punishment of a $500 fine or 60 days’ imprisonment for any storeholder who did not accept notes revalidated by the Jefatura Política ABCS, Gobernación, vol. 640 bis, exp. 63.

On 9 February 1915 Jefe Político Felix Ortega annulled the Cornejo issue. He said that his motive was to avoid the economic isolation of the territory, since the Cornejo notes were not accepted by businesses on the mainland and he was trying to put into circulation a paper currency that was acceptable in Sonora, Sinaloa and Tepic. He told the La Paz town council that holders of Cornejo notes could exchange them over time for money in general circulation (i.e. the first and second issues from Chihuahua (the sábanas and dos caras), and the issues of Pastor Rouaix in Durango, Felipe Riveros in Sinaloa and José Maria Maytorena in Sonora).

On 22 March 1915 businesses made an agreement with the Secretario de Gobierno to retire the local issues. The storekeepers agreed for two days (23 and 24 March) to accept the notes revalidated by the Jefatura Política at par and without any restriction: then they would then hold them until the government could change them for notes in general circulation. They also send to Sonora for some fractional notes. For its part, the Jefatura Política would issue sufficient paper money to exchange any local currency that people still hadABCS, Gobernación, vol. 648, exp. 106. However, on learning of the agreement the Jefe Politico stated that the time allotted for bringing the fractional notes from Sonora was insufficient, so the day after the meeting he decreed that the Jefatura Política vales in circulation (and any put into circulation in future to replace notes that had deteriorated) would be of forced circulation within the District, irrespective of any steps taken to replace the local currency with that which was in use in the rest of the country. Despite the threat of a fine of at least fifty pesos, some merchants refused to accept the vales, so the authorisation was renewed at the end of March.

On 27 May 1915 General Felix Ortega, the Jefe Político and Comandante Militar, decreed (decree núm. 12) that the paper money of those states that submitted to the Convention were of forced circulation until the Convention or Villa himself decreed otherwise. 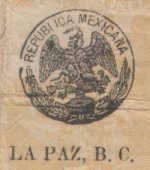 A small round stamp with ‘REPUBLICA MEXICANA’ and eagle with ‘LA PAZ, B.C.’ below. 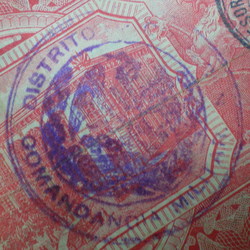