The first bank to be authorised by the local government of Chihuahua was the Banco de Chihuahua. The first attempt at establishing the bank was short-lived, but it was re-established almost a decade later and thereafter had a troubled existence before finally going into liquidation and being rescued by the Banco Minero.

In 1874 the American Enrique Müller applied for exemption from taxes for the bank (banco de cambio y circulación) that he was trying to establish, accompanying his application with examples of the notes that he intended to issue. The state legislature granted him his exemption on 28 July 1874Periódico Oficial, .

In 1875 the bank was given the right to issue 300,000 pesos in notes of twenty-five centavos, fifty centavos and one peso values. The notes were to be of voluntary acceptance and payable on sight in legal tender or its equivalence in silver coins at the current rate of exchange (en moneda corriente o su equivalente en pesos de plata del cuño mexicano al cambio del día)Periódico Oficial,. In March 1875 the state government agreed that notes with a value of less than $10 did not require tax stampsEl Radical, reported in La Iberia, 11 March 1875.

As soon as the notes were put into circulation the bank was attacked by its political and commercial rivals. On 19 August 1875 a group including Sres. Sini y compañía, J. F. Maceyra, Félix Francisco Maceyra, Jesús and José González Treviño, Antonio Asúnsolo and Juan M. Asúnsolo published a pamphlet entitled “Banco de Chihuahua” attacking the bank, amongst other things for being insolvent and for raising interest rates. This was answered by an another pamphlet, dated 10 September 1875 and written by “Varios libre-cambiastas”, that extolled the bank as an asset to the stateEl Correo de Comercio, 13 October 1875.

When in July 1876 Angel Trias, after entering the state capital, levied a forced loan on its leading citizens, the bank was assessed at $2,000 (with Müller at $2,000 in his own right and GoschChristopher Henry (Enrique) Gosch is recorded as a Comerciante y Comisionista, Agencia de Minas in Chihuahua and Batopilas in 1884 (ST papers). He married Carolina Völkerath and had a daughter, Carolina Gosch Völkerath, who married Enrique Müller, Jr. They, in turn, has seven children, three boys and four girls. Carolina Gosch died in 1900, and Enrique Müller Jr. was shot by a servant cleaning a pistol in 1901. Henry Gosch sold the family’s part in the Hacienda de Encinillas to Terrazas in 1905 (information from Consuelo Müller). y Markt at $1,500)Boletín Militar, 1 July 1876.

However, it seems that because of the difficulties operating the bank Müller threw in the towel and this first Banco de Chihuahua had stopped functioning before the Banco Mexicano appeared in early 1878La Patria, Mexico City, 23 April 1878. 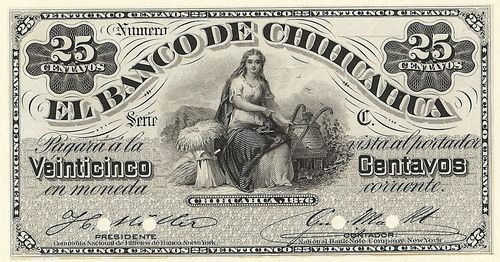 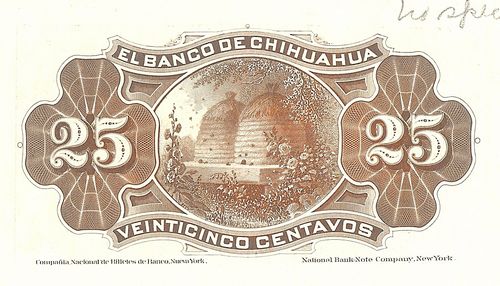 The 50c and $1 notes were delivered without signatures but the 25c has the engraved signatures of Heinrich Müller as President (Presidente) and G. Markt as Accountant (Contador).