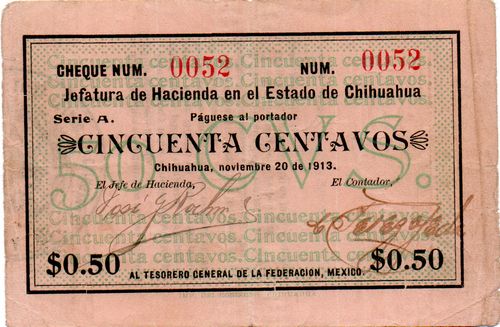 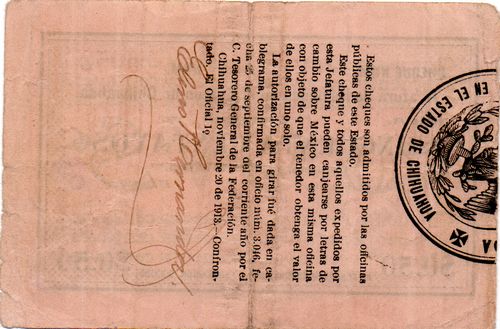 General Salvador R. Mercado was the Huertista governor of Chihuahua and commander who found himself besieged in Chihuahua City.

These notes were being printed by the state printing office and the El Norte press when, as soon as the 50 centavos value was released, an uproar ensued.

In his report to Huerta, Mercado said that the Tesorería refused to acknowledge the notes and businesses therefore closed. Without funds, with desertions increasing and in face of a real risk that his troops would begin to sack the shops, Mercado decided to retreat to OjinagaLuis y Adrian Aguirre Benavides, Las Grandes Batallas de la Divisíon del Norte, México, 1964. In the memoirs that he later wrote to defend his actions Mercado gave a slightly different version. There he recalled that a delegation of businessmen called on him and told him that the Chamber of Commerce had decided to close the principal stores, "since what he intended was nothing short of a diplomatic looting that in a short space would leave businesses with neither money nor goods. As soon as his notes were issued they would drive out the remaining good money and leave the merchants with only his own worthless paper, useless in dealing with American and European firms". He therefore had to cancel his plan of issuing the notesSalvador Mercado, Rectificaciones Históricas, 1913-1914, México, 1916.

It is a matter of dispute, therefore, whether the 50 centavos note, dated 20 November, signed by José G Rochin as Jefe de Hacienda and C. Pérez Ojeda as Contador and countersigned by Eleno Hernández as Oficial Primero, did in fact reach circulation.

Even if the notes were issued, they will have only been in use for eleven days until 1 December when Mercado abandoned the city.

AlmadaFrancisco Almada, La Revolución en el Estado de Chihuahua, Chihuahua, 1964 states that the Jefatura de Hacienda received, via Ciudad Juárez, documentos o vales to the value of $1,200,000, though he had been unable to find out if all of these were put into circulation. Certainly, he reports, the holders of such notes lost everything. It is probable, however, that Almada was confusing the Jefatura de Hacienda issue with Orozco's bonds and the Caja de Ahorros notes.