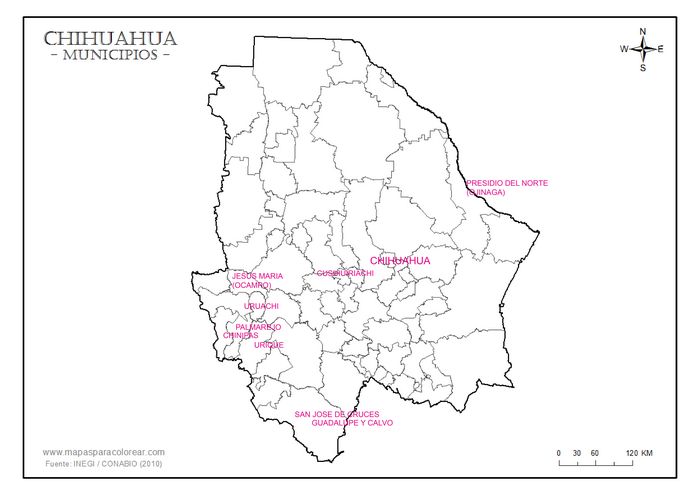 The business house of Herrera, González, Salazar y Compañía, founded by Manuel de Herrera, Juan María Salazar and Celso González, ran a mining business in Cusihuiriachic, and later established the first Banco Minero Chihuahuense. In 1874 thirty-six of its employees unsucessfully tried to stop the company illegally paying in wooden tokens that were only redeemable at the company store. The case went to the Supreme Court, where the judge upheld a judgement of the Chihuahua court that the company's workers had no redress against the company, nor against the state's governor or the judge for his refusal to act as the right of amparo (judicial protection) only related to government departments, not private individuals, and only to acts not to omissions. However, the court declined to fine the litigants as they were noticeably poor. It could have added that they would have been twice as poor as the company only cashed its own scrip at half its face valueEl Foro, 17 December 1874; Semanario Oficial, 30 June 1875.

The Correo del Comercio said that the workers were ill-advising in asking for an amparo rather than proceeding against the company, which it castigated for its iniquitous abuses, reminiscent of the oppression of colonial timesEl Correo del Comercio, Segunda Epoca, Núm. 1,108, 18 December 1874.

The Rascóns were the political bosses, leading mine-owners, and most important merchants of Uruachic from the late eighteenth century. During the thirty years preceding the Revolution, they came to control virtually every mining claim of any value in the region, as well as its largest haciendas. The family dominated local politics to such an extent that in 1908 its members held eight of ten seats on the Uruachic ayuntamiento. Family patriarchs Enrique C. and Ignacio Rascón acted as state legislators and jefes politicos during much of the Porfiriato. They allied themselves with Luis Terrazas from the time when they joined him in opposition to Porfirio Díaz in the 1870s. The Rascóns emerged from the Revolution with their mining and commercial interests intact. Like the Terrazas, they had backed the Orozquistas in 1912 but evidently avoided exile because they kept a foot in both camps. When Orozquista Guillermo S. Rascón was ousted as presidente municipal, another Rascón was his suplente (alternate). Guillermo was eventually pardoned by Vila. During the 1920s, the family dominated the local ayuntamiento once again and a family member was president municipal in nine of the thirteen years between 1918 and 1931.

In the 1870s the Rascóns' company, the Compañía Minera, Uruachic, issued both tokens and paper currency, the tokens being produced at the Alamos minttokens dated 1873, with legend 'N y E Rascon Hermanos / 10 / centavos / 1873 Mineral de Uruachic / (eagle on cactus with snake) / MEXICO', and same for 12½c, 25c, 50c and 100c. (Richard D. Worthington, Catalogue of the trade tokens of Chihuahua, Mexico, El Paso, 1990) and the notes either produced locally or printed by the American Bank Note Company in New York. Both were redeemable at the company store, which was run by Ezequiel and Daniel Rascón. Notes in three denominations (twenty-five centavos, fifty centavos and one peso) are knownAlmada, op. cit., mentions vales with a value of two, four and eight reales. Were these the same or did he know of an earlier issue? Was he in fact referring to the tokens listed above?. 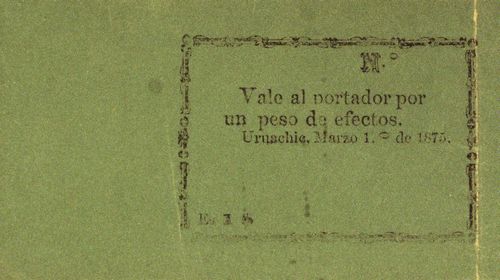 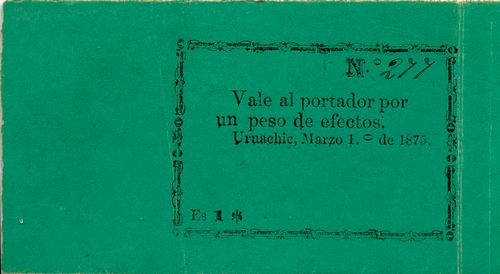 The one peso is known as a green uniface note measuring 104mm by 56mm dated 1 March 1875 with legend 'Vale al portador por / un peso de efectos'. It was presumably part of a temporary measure until more professionally produced notes were available. 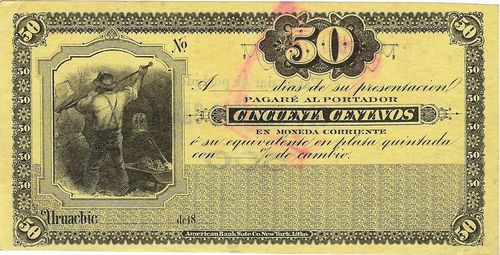 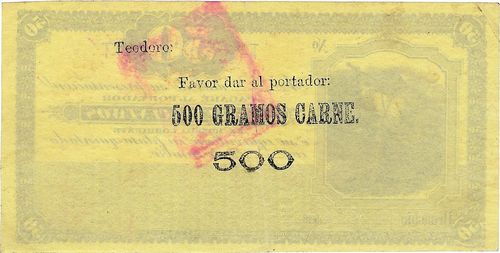 Urique in the next valley was another mining town dominated by a single family, in this case the Becerra. Juan N. Becerra moved to the region in the early years of the nineteenth century, becoming an important mineowner and local political official. His sons Buenaventura Agustín and José María expanded the family's economic holdings. Buenaventura, in particular, grew rich selling mines to foreign companies, dying a millionaire in 1907. The brothers briefly tried to obtain statewide office in 1877, when José María ran in and lost the gubernatorial election. Thereafter they allied themselves with the Terrazas. Marriage linked them to foreigners who operated their mining enterprises and to local political officials.

On 8 April 1895 Becerra Hermanos went into liquidation with its assets being bought by the Banco MineroAGN, Antiguos Bancos, Actas de Banco Minero, libro 1, 28 February 1888 to 5 January 1899.

By 1909, as well as their mining interests, the Becerra family ran the beef trade and held all federal, state and municipal posts. A newspaper reported that it represented the 'height of patronage' (el colmo de compadrazgo)El Correo de Chihuahua, 14 May 1909.

After the start of the revolution, one family member was jefe político during the revolutionary governorship of Abraham González, so that they apparently played both sides during the years of upheaval. The Becerras continued to mine and ranch in Urique through the 1930s. Relatives served in the state legislature from western districts. The family’s political rule as challenged in 1924, when angry opponents rain local boss and family member Alfredo S. Monge and his son from town. 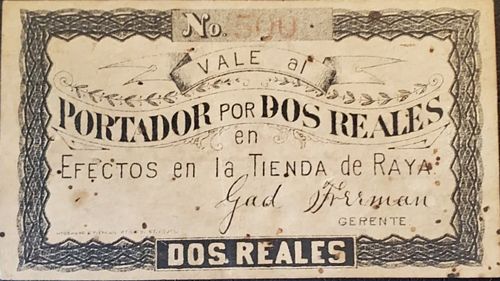 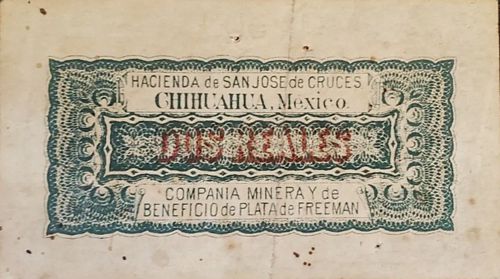 This mining company and smelter (beneficio de plata) issued vales al portador to be redeemed for goods in their tienda de raya. They were printed by [               ] of St. Louis and signed by Gad Freeman, as gerente. 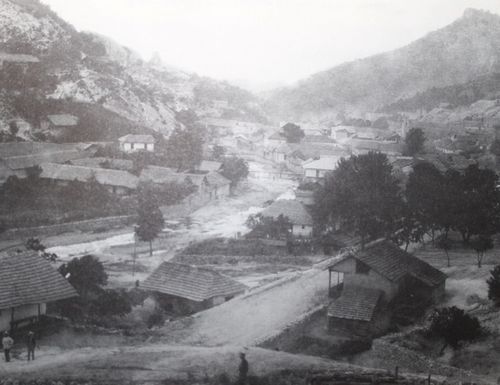 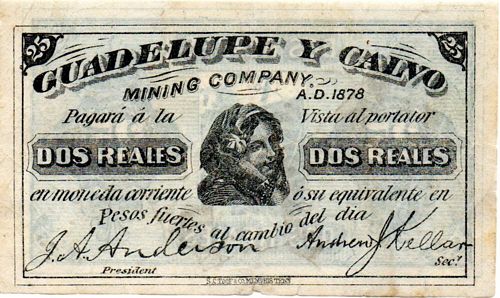 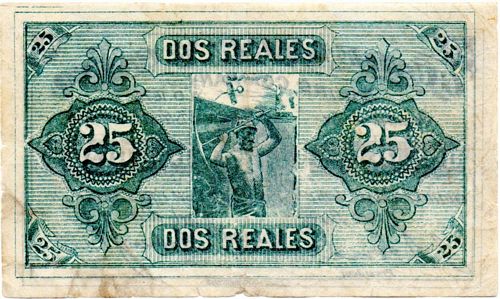 Guadalupe y Calvo is an old mining town squeezed into a narrow valley where the air is redolent of pine smoke. It is reached from Hidalgo del Parral along a road where you are constantly looking down on where you were half an hour ago or will be in ten minutes' time. The trip to the mine, however, is well worthwhile and the view from the mine entrance, the narrow gauge railway track weaving around the rock face, and the cavern that has been dug to follow the vein down below a waterfall could make you forget the appalling conditions under which the Mexicans laboured to earn their pieces of paper.

Antonio Ochoa (state governor 1856-1861 and 1873-1877) and his brothers inherited the Nankin mine and a smelting plant here and in 1850 organised the Compañía Minera de Guadelupe y Calvo. For the next thirty years it was the most powerful mining company in this part of the state. In 1878 the mines were sold to the Guadelupe y Calvo Mining Company, based in Memphis, Tennessee, with the brothers retaining a 20% shareholding.

The notes issued by the Guadelupe y Calvo Mining Company are known in three denominations: two reales, one peso and five pesos. The notes are payable in copper coins or their equivalence in silver pesos at that day's exchange rate (en moneda corriente o su equivalente en pesos fuertes al cambio del dia). The two reales note is dated 1878, whilst the one peso and five pesos notes are undated. All have the printed signatures of James A. Anderson as President and Andrew Kellar as Secretary.

These notes are similiar of those of the Banco de San Ignacio.

Palmarejo is a small mining community in the mountainous southwest of Chihuahua on the road from Temoris to Chínipas. Miguel Urrea bought the mines there in 1845 and worked them for several years, and they were then sold in 1886 by his heirs, the Almadas of Alamos, to the Palmarejo Mining Company Limited. Later this company merged with the Mexican Railway Company Limited, which ran the narrow gauge railway between Palmarejo and El Zapote (the mill on the Chínipas river just south of Chínipas), to form the Palmarejo and Mexican Gold Fields Limited, which, according to AlmadaFrancisco Almada, Resumen de Historia del Estado de Chihuahua, Mexico, 1955, issued scrip though none is known. However, we do know of a 25c note of the Tienda de Pago en Palmarejo, dated 6 October 1884 and signed by Jesús G. Almada. It is payable in copper coins or silver pesos at an 8% discount (pagadero á la vista en moneda corriente ó en pesos fuertes con el 8% (ocho por ciento) de cambio á elección de la casa).

Oscar Ocháran, of Alamos, was a mining investor who also operated the narrow gauge railway between Palmarejo and Chínipas and issued tokens for use by either passengers or freightElwin C. Leslie, The Palmarejo Railroad Token, in Plus Ultra 69. Ocharan also operated the stage coach between Alamos and Guaymas.. 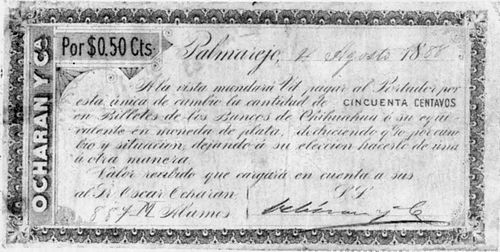 By 1911 Ocharan was a large garbanzo raiser in the Mayo valley, an owner of the Hacienda La Colorada and a leading producer of mescal wine and fibre in the Alamos districtThe Mexican Herald, 27 November 1911. In 1912 he went into exile in the United States.

Guillermo (Johann Friederik Wilheim) Hagelsieb was born in Cassel, Germany on 6 March 1832 and migrated to Galveston, Texas in 1852. He eventually ended up in Ojinaga. He was Director of the official journal, El Estado de Chihuahua, in November 1885 and died in 1902.