In May 1915 a large quantity of counterfeit $50 "Constitutionalist" notes were circulating in Tampico, Tamaulipas. The authorities arrested four Americans, Jim Sigler, the owner of a nearby ranch, and S. Thomson and his two sons. They confessed to having bought $500,000 in fake notes from an American but had only put $20,000 into circulation. The notes were very coarse and also had a fake REVALIDADO seal. The Jefe de las Armas, Coronel Espinosa, had a conference with the American consul and they agreed that the counterfeiters would be deported, after they guaranteed to make good any loss that the public had sufferedEl Democráta, Veracruz, Tomo I, Num. 199, 27 May 1915. However, the New York Times a month later reported that three Americans, William Thompson, his brother, Robert, and a man named Segler, had recently been brought to Veracruz from Tampico charged with circulating counterfeit money. William Thompson had been released, according to reports received by Secretary Lansing, and his brother Robert would be. The charge against Segler appeared to be more serious, and his case was pendingNew York Times, 27 June 1915.

In August it was reported that four American residents of Tampico had been sentenced to long penitentiary terms for counterfeiting. It was reported that the Americans had been placed on board the Mexican gunboat Bravo and sent to VeracruzFort Worth Star-Telegram, 11 August 1915.

These appear to have been $50 sábanas.

The characteristics listed in the notice of 21 March 1914 are as follows:

De la Garza’s letter of March 1914 and the notice of 24 March 1914 lists the following characteristics:

In the Alvarado case the characteristics are given as:

and also when stamped as counterfeit. 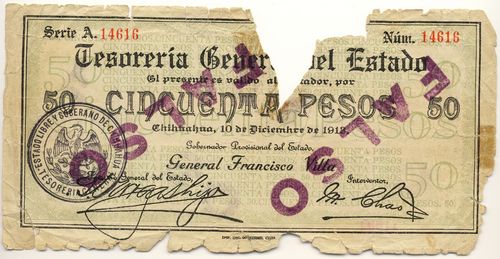 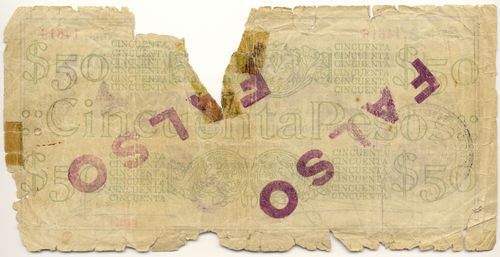 The "Diciemhre' misspelling might have been due to copying a similar misspelling on early genuine notes. So the December 1914 notice rightly informs us that if Vargas and Chao’s are handsigned, the notes with ‘Diciemhre’ are genuine.

The notice issued by the Tesorería General in Hermosillo, Sonora lists:

However, notes with three similar 'h's are common and known with a variety of resellos, and are more likely to have been a genuine variation, so the single defining characteristics must be the missing full stop in Chao's signature.

A probable counterfeit of the 'final h different' type is: