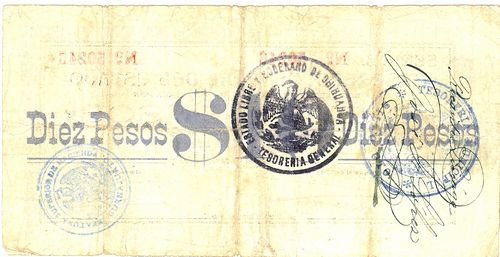 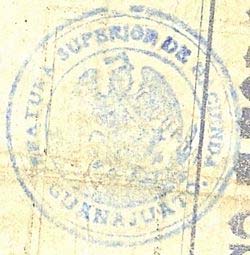 A round (31mm) blue stamp with ‘JEFATURA SUPERIOR DE HACIENDA – GUANAJUATO’ with eagle in centre.

The rebels captured Guanajuato on 28 July 1914. On 21 August the Governor, General Pablo A. de la Garza, wrote to the Jefatura de Hacienda, saying that as the sábanas lent themselves to counterfeiting, his government had thought it prudent not to make them of forced circulation within the state but to suggest to the public that they take them to the Jefaturas de Hacienda, as they would be able to authenticate the notes and were authorised to exchange them for others of forced circulationCrispín Espinosa, Efemérides Guanajuatenses, Guanajuato, 1920. On 1 September 1914 Enrique Campacos, the Administrador General de Rentas, listed the notes that his office would accept, including the sábanas, dos caritas and Ejército ConstitucionalistaEl Observador, 7 September 1914. Later the sábanas were made of forced circulation, in accordance with other decreesIn December 1914 the Governor and Comandante Militar stated that Constitucionalist and Villista notes were of forced circulation (Periódico Oficial, 3 December 1914).

Perhaps the offices restamped them because they did not have enough notes to exchange them.

During the first half of 1915 Guanajuato and Aguascalientes were the major battleground between Villa and Obregón and the economic situation in the two states deteriorated. On 28 February the Jefe de Armas and Presidente Municipal of Guanajuato was complaining that many businesses were refusing to accept the Chihuahua notes, even thought they composed the Chamber of Commerce that had agreed that the notes should be of forced circulation, once they were restamped, and had set up the restamping office.

a circular ‘EJERCITO CONSTITUCIONALISTA - GUANAJUATO’ with eagle in centre. 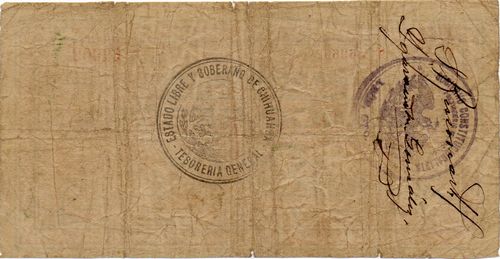 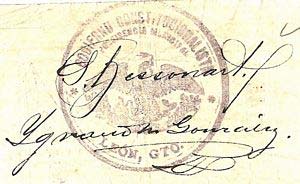 A round (40mm) black seal with ‘GOBIERNO CONSTITUCIONALISTA - PRESIDENCIA MUNICIPAL’ above and ‘LEÓN, GTO.’ below encircling an eagle, endorsed with the signatures of J(?). Bessonart and Ignacio M. González.

Dolores Hidalgo, the birthplace of Mexican independence, is in the north-central part of Guanajuato.

This was possibly a revalidation carried out in the Jefatura de Hacienda in accordance with the Convention's decree of 23 January 1915. 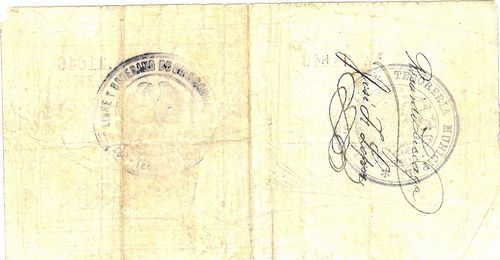 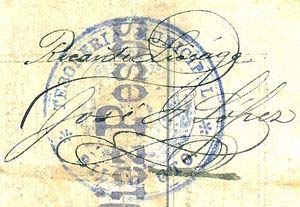 A large (41mm) round dark blue stamp with ‘TESORERIA MUNICIPAL - SILAO, GTO.’ and eagle in centre and signatures of Ricardo Liceaga and José H. López.

Silao is a city in the west-central part of Guanajuato. 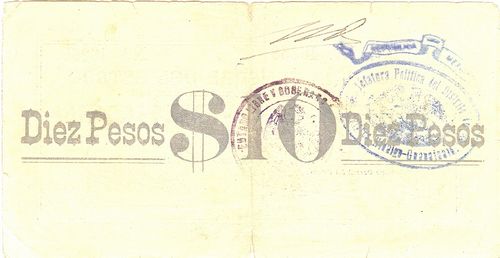 Jefaturas políticas were the intermediate administrative tier between the state and the municipalities. The district of Miguel Hidalgo [ ] 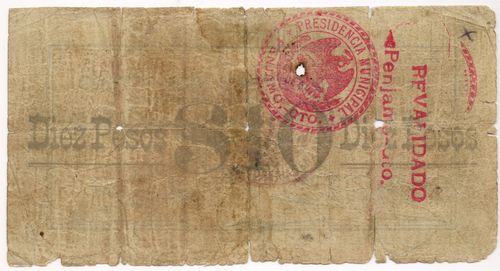 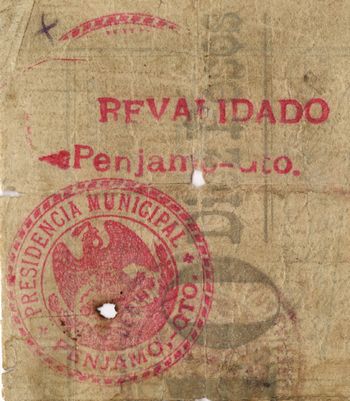 Pénjamo is a city in the southwest of the state. 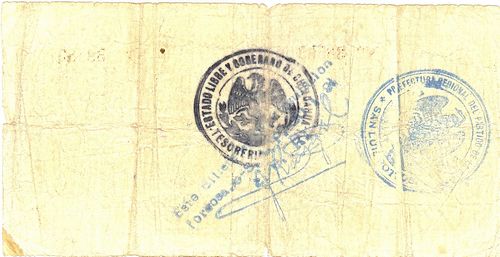 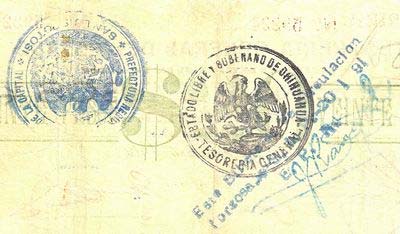 The Constitutionalists captured San Luis Potosí in July 1914. On 19 July General Pablo González decreed that the Huertista notes from Saltillo and Monterrey were worthless and that the paper money issued by the Constitutional government was of forced circulationPeriódico Oficial, 1 August 1914. On 24 August Coronel Ignacio Ramos of the Prefectura Regional de la Capital warned the public that the two Chihuahua issues were of forced circulation. The notes would be exchanged for other Constitutionalist currency at a later date if the authorities decided to withdraw them, but the public would be given sufficient noticePeriódico Oficial, 27 August 1914. However, Ramos made no mention of revalidation. The notes were also listed as forced in October 1914Periódico Oficial, 23 October 1914.

In the beginning of 1915 Eulalio Gutiérrez broke with the Conventionists, took part of the treasury and tried to install a national government in San Luis Potosí, with the support of Aguirre Benavides and the neighbouring governor of Hidalgo. On 1 February General Tomas Urbina and his Villistas took the city peacefully and General Emiliano Saravia was named governor.

The resello appears to imply that J. Rangel was E(l) P(refecto) R(egional) but a Juan Rangel had been a porter (conserje) in the Sección de Correspondencia y Archivo of the Tesorería General of Chihuahua in September 1914AAC, Ejecutivo Sec 2ª Hacienda C-1 Año 1915 exp. 167 , reply of Administrador Local de Correos to governor, 23 March 1915 and might have been the expert sent from Chihuahua.