In 1943, during the Second World War, Mexico was again faced with a silver crisis. A combination of reasons - anticipation of a rise in the price of silver; the Mexican government’s agreement to sell practically its entire silver production to the United States for its military industry; and a boom in the Mexican and US jewellery industries - caused the price of silver to rise and silver coins to be hoarded. On 21 August Mexico imposed a heavy export tax on silver products, to make it unprofitable to melt down silver coins to ship as bullion, and temporarily suspended a contract which promised all surplus silver production to the United States. However because of a shortage of fractional coinage, especially the fifty centavos denomination, it was compelled to authorise banks to issue cheques with printed denominations of twenty- five and fifty centavos. while it arranged for the production of new coins.

Originally the Banco Mexicano Refaccionario offered to print 50c cheques for agricultural businesses so that they could make their payrollsEl Siglo de Torreón, 27 July 1943. 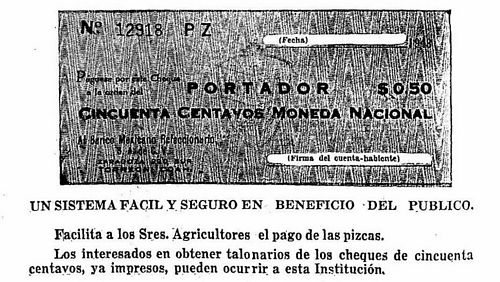 Then, on 5 August the Banco Mexicano Refaccionario agreed with the Cámara Nacional de Comercio and the Asociación Civil “Pequeña Propiedad Agrícola de la Comarca Lagunera” to issue 50c cheques, backed up by deposits left with the bank. A public notice was published the following day, giving details and the names of the signatories. The cheques would be available on 7 AugustEl Siglo de Torreón, 6 August 1943.

By 10 August the Cámara de Comercio decided to increase the number of signatories to ten Rodolfo Solís, Ricardo Ramírez, Mónico Esquivel, Juan José Martínez, Pánfilo Sánchez, Emigdio Ulloa, José Lozano, Santiago Villarreal, José S. Sada and Francisco Dingler, and the Pequeña Propiedad Agrícola might have done the same, as they were receiving request not only from Torreón, but from Gómez Palacio, Lerdo, Bermejillo, Tjahualilo, Matamoros, Francisco I. Madero y San Pedro. A single farmer from San Pedro, Manuel Antero Fernández, had asked for $6,000 in cheques. The two issuers also decided that any new printings would be on paper of better quality since until then, because of the time pressure and lack of adequate paper, the cheques were very thin and deteriorated easilyEl Siglo de Torreón, 11 August 1943. 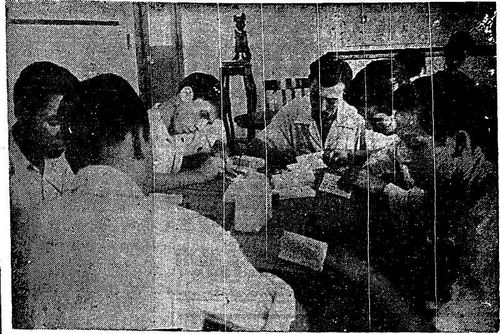 These notes travelled because on 29 August it was reported in Monterrey, Nuevo León, that people were paying with cheques from casas comerciales in other cities, mainly from Torreón, and banks were taking them at a discountEl Porvenir, Monterrey, 30 August 1943.