In the hopes that an influx of settlers could control Indian raids the newly independent Mexico liberalized its immigration policies for the north of the country and settlers from the United States were permitted in the colonies for the first time. 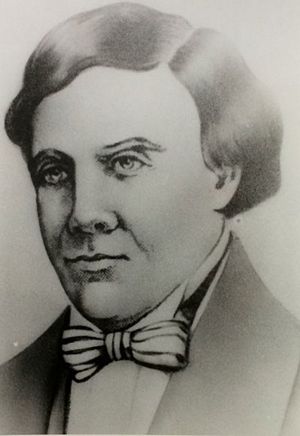 In 1822 Green Dewitt petitioned the Mexican government for permission to settle colonists in Texas but was denied. He was inspired to try again after the passage of the Ley General de Colonización (General Colonisation Law) on 28 August 1824 and after having met the earlier empresario, Stephen F. Austin, with whom he continued to have a close relationship. Austin's influence, together with Baron de Bastrop’s helped DeWitt to petition the Mexican government successfully on 7 April 1825, for an empresario contract to settle "four hundred industrious Catholic families...known to be respectable and industrious," and also any equally respectable families of Mexican nationals who "shall come to settle with us." On 15 April the government in Saltillo, Coahuila, gave him permission to settle in an area bounded by the Guadalupe, San Marcos and Lavaca Rivers. DeWitt’s surveyor, James Kerr, chose to place the capital, called Gonzales after Rafael Gonzales, provisional governor of Coahuila y Tejas, at the confluence of the San Marcos and Guadalupe Rivers.

By 1828 the colony consisted of 11 families and 27 single men. Most were primarily from the southern states, with some coming from as far north as New York. By 1829 the colony had experienced a boom, expanding to 30 families and 34 single men. By 1830, it had 56 families, and 65 single men. On 6 April 1830 the Mexican authorities passed a law prohibiting further immigration to Texas from the United States. Austin was able to secure a waiver for DeWitt's colony, but the measure made it difficult for him to recruit families. When his contract expired on 15 April 1831, he had settled a total of 166 families.

In the colony "‘Money was as scarce as bread. There was no controversy about “sound” money then. Pelts of any kind passed current and constituted the principle medium of exchange” Noah Smithwick, The Evolution of a State, or, Recollections of Old Texas Days, 1900. DeWitt did issue, however, what was essentially land scrip in denominations of five, ten, and twenty dollars, for his colonists to buy their lands. This handwritten currency was transferable and generally passed as a medium of exchange. 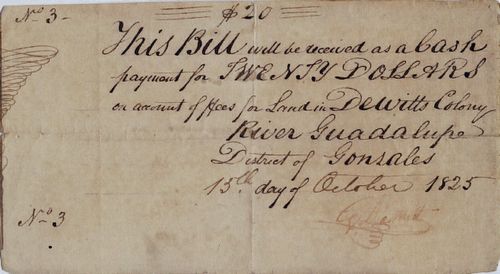 The fact that these notes were denominated in U. S. dollars rather than Mexican pesos was one of several indicators, including the presence of black slaves (in violation of Mexican law), that the U. S. immigrants did not sincerely embrace their new Mexican citizenship.