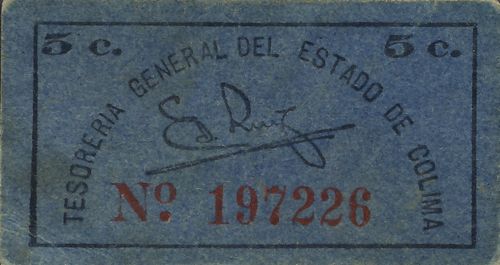 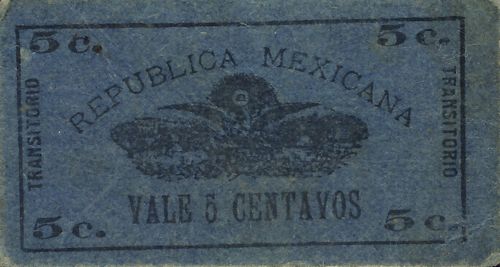 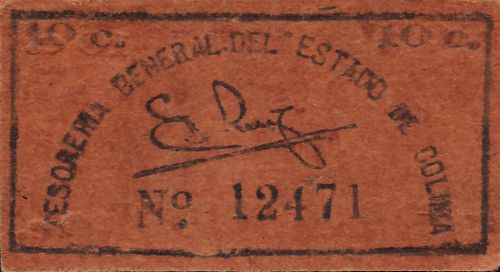 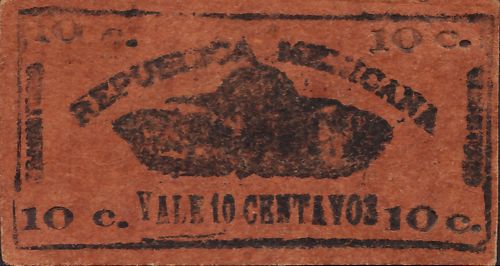 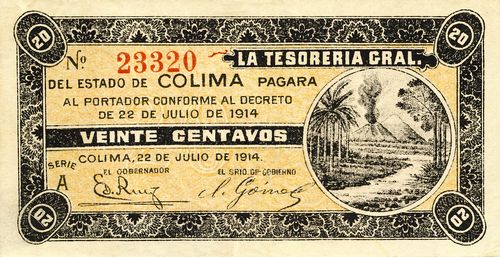 The two pasteboards have Governor Ruiz’ signature whilst the two higher values carry the signatures of Ruiz and Arturo Gómez as Secretary and another view, but this time of both Vólcan de Colima and the extinct Nevado de Colima.

These were intended to circulate for just six months, but on 23 September Ruiz had to order a second issue of another 30,000 pesosEl Estado de Colima, Tomo XLVIII, Núm. 36, 26 September 1914.

A local newspaper reported that the fractional notes of the state government were put into circulation on 4 September 1914El Popular, Epoca Tercera, Núm. 46, Colima, 5 September 1914. So this might be where to place an issue of 5c and 10c cartones. These will have been printed by the Guadalajara company of Litografía J. M. Iguíniz. Iguíniz produced similar perforated notes for the state of Jalisco in June 1914. 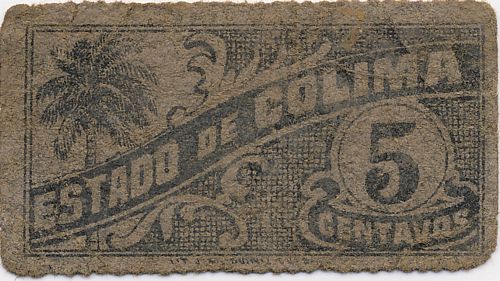 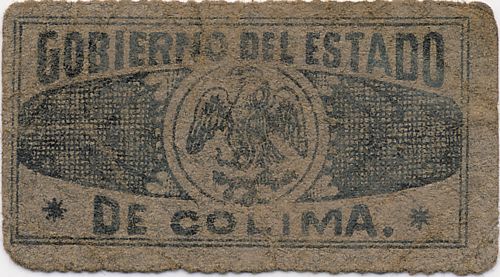 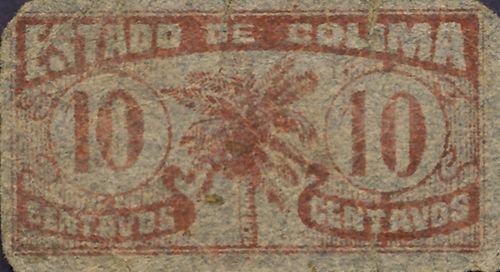 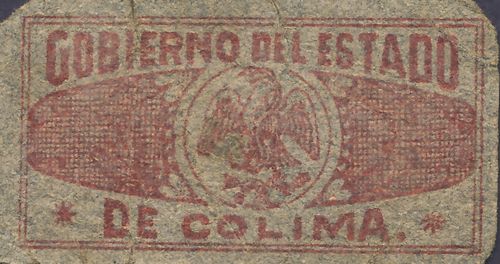 The currency problems continued and on 18 January 1915 the new provisional governor, Juan José Ríos, issued his decree núm. 7. Strangely his preamble states that difficulties had been caused to businesses and individuals by the lack of fractional paper currency, which had been taken out of the state. Anyway, given that the State Treasury had borrowed sufficient funds to back a new issue, he authorized an issue of 50,000 pesos in five denominations – 5, 10, 20 and 50 centavos and one peso. The notes issued would be redeemable after six months. 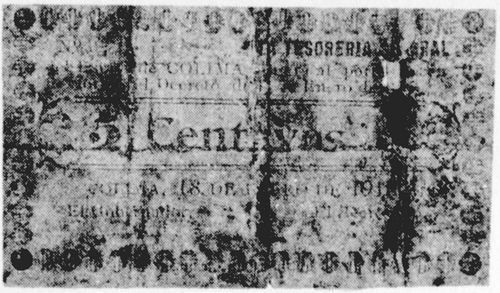 At their meeting on 12 May 1915 the town council received a letter from the Administrador del Timbre who stated that he always tried to ease the difficulties of the state’s bonos and that it was not exact to say that his offices was refusing to accept themAMCol, Actas de Cabildo, Colima, libro 88, acta 65, fojas 5v-9f.

These were produced by the printing house Litografía J. M. Iguíniz, in Guadalajara, Jalisco. The higher values are signed by Juan José Ríos as Governor and Francisco Ramírez Villarreal, as Secretary

and the one and five peso notes have a view of the Government Palace with its distinctive clock tower. 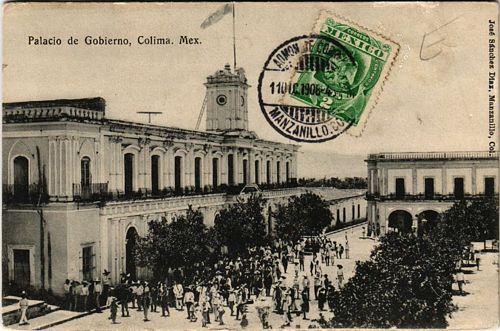 On 27 August Ríos commented that because people were refusing to accept the notes of the January issue because of their deterioration, and also because they had discovered counterfeits of this issue, they were to be replaced but with an equal amount. He therefore increased the 4 June 1915 issue by $50,000 to a total of $130,000. The exchange was to take place in the General Treasury up to 30 September. The Municipal Treasuries in the rest of the state could also collect notes, give a receipt and forward them to the central office. After 30 September the notes would be demonetized and holders would have no claim. On 1 September the Presidente Municipal decided that notes of the 18 January issue in the Tesorería Municipal that had deteriorated and become unusable should be exchanged in the Tesorería General de Estado with the special commissionerAMCol, 61, exp. 1 letter Presidente Municipal to Tesorero, 1 September 1915. However, as usual, because poorer people and those outside the main centres were unable to hand in their notes in time, on 1 October the period was extended for a month, though these 18 January notes were now no longer legal tenderAMCol, 61, exp. 1. On 27 October the Presidente Municipal of Colima wrote to the Secretario de Gobierno asking to exchange the large number of bonos of ex-Governor Ruiz, which were in too bad a state to circulate (as well as those of Delgadillo that still had not been exchanged). Three days later the Governor agreedAMCol, E-60ª, Pos 74, Exp. 275.

On 6 September Riós had told Carranza that Ruiz’ two issues, though authorised for $50,000, in fact, according to records, totalled $60,000. The notes had not been amortized after six months, as decreed, were now in poor condition and stores were refusing them and they were mainly in the hands of the poor. As Riós did not have the funds to redeem them and they had been spent on military matters, he felt they were a federal, rather than a state, obligationCEHM, Fondo XXI-4 telegram Juan José Ríos, Colima, Colima to Venustiano Carranza, Veracruz, 6 September 1915.

Finally, in 1916 the other remaining issues were gradually withdrawn. On 17 April Ríos announced a period of two months for the handing in of the notes issued in accordance with Ruiz’ decrees of 22 July and 23 September 1914 to the Administración Principal de Rentas del Estado, though it seems that he reserved giving legal tender notes in exchange until his administration had discovered what had happened to the funds that were supposed to guarantee these issues. On 3 May Ríos ordered the withdrawal of the 4 June and 27 August issues: these were declared no longer of obligatory acceptance but until 25 May the General Treasury would exchange them for Gobierno Provisional notes issued in Veracruz. Thereafter they would be deemed worthless.

Rios questioned his predecessor Eduardo Ruiz' management as governor, especially in financial matters, and in May 1916, staged a public controversy by initiating an investigation into the fate of the public funds raised through Ruiz’ issue. Ruiz’ response was that he was “the one who craves this research the most because it would place men in their true position and definitively clarify the facts"Boletín Militar, Jalisco, 6 May 1916.

During the governorships of Ruiz and Ríos quantities of decommissioned paper money were collected and burnt in the patios of the Palacio de Gobierno.

In summary, we have the following Constitutionalist issues: