Colima is a small state on the Pacific coast, below Jalisco. Although during the Revolution it escaped the violent upheavals experienced in some other parts of Mexico it can be seen as a microcosm for paper money, with competing factions, authorities trying to cope with the disappearance of hard currency, with counterfeiting, with ensuring a sufficient backing for any issue and with arranging a timely withdrawal.

Over time Colima used various national issues and issues from other states but also produced local solutions to the shortage of small change that impeded commerce as soon as coinage began to disappear or be hoarded. On 24 April 1914, using extraordinary powers granted him two days earlier, the interim Huertista governor, Antonio Delgadillo, authorised the State Treasury to issue a series of valesEl Estado de Colima, Tomo XLVIII, Núm. 197, 9 May 1914.

Delgadillo arranged for these vales to be printed in Mexico City, but two months later they had still not arrived, so on 6 June he authorized a provisional issue, to be printed locally and used until the definitive issue turned upEl Estado de Colima, 13 May 1914. There were a total of 100,000 pesos in four denominations – 10c, 20c, 50c and one peso – dated June 1914. 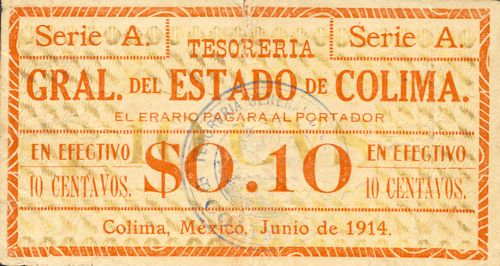 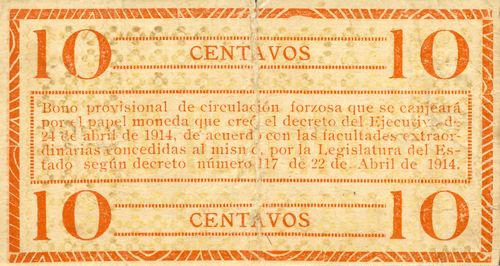 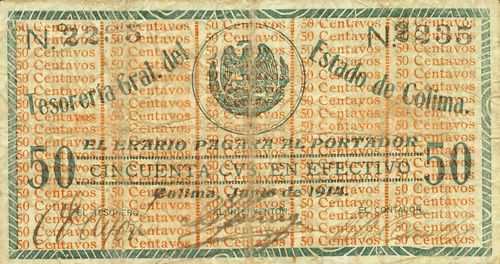 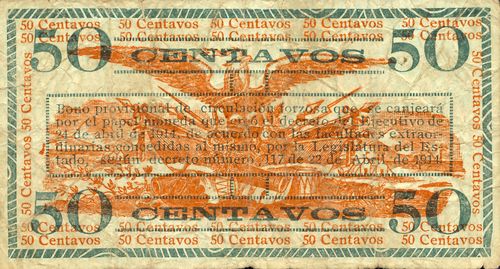 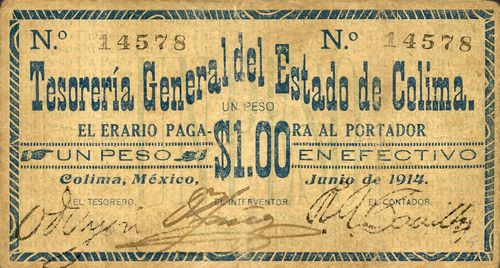 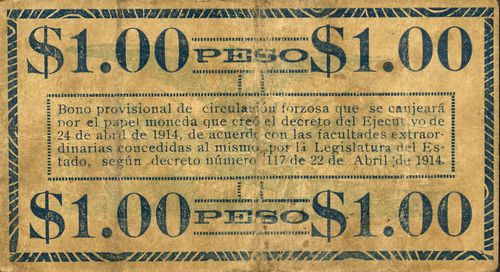 These unsurprisingly have a makeshift, military appearance, and could be considered as similar to the more well-known Huertista “siege” issues of Monterrey, Saltillo and Guaymas. The higher values were signed by Odilón Ayón as Treasurer (Tesorero), [                ][identification needed] as Interventor and Ramón A. Carrillo as Accountant (Contador).

So, what happened to the original printing? The answer is provided by two notes, a 50c and $1, printed by the Imprenta Franco Mexicana, a book-printer in Mexico City. Though these are of a reasonable quality, they are a simple design, with vignettes of the national emblem, the state’s coat of arms and a view of the nearby active Vólcan de Colima, and lack the sophistication of normal bank-notes. They fulfill the specifications of the original 24 April decree, namely:
1.    four values, divided into distinct series ($1 –Serie A, 50c – Serie B, 20c – Serie C and 10c –Serie D)
2.    issued by the Tesorería General (Erario) del Estado, and
3.    to be signed by the Tesorero and Contador.

They were printed by a Mexico City firm, unaccustomed to such work and unable to complete on time, and some of these unissued, unsigned and unsealed notes survived as curiosities, though the two lower values have not been recorded.

The Constitutionalists under General Alvaro Obregón captured Colima on 19 July 1914 and a week later Obregón banned Delgadillo’s notesEl Estado de Colima, Tomo XLVIII, Núm. 27, 25 July 1914). Though Delgadillo’s notes had been banned they still needed to be withdrawn, so on 4 August the State Treasurer, Ramón A. Carillo, announced that businesses and individuals who held more than fifty pesos in these notes had a week to hand them into the General Treasury in exchange for special certificatesEl Estado de Colima, Tomo XLVIII, Núm. 28, 1 August 1914.

In summary, these Huertista issues were: