Generally the authorities were opposed to private issues. For instance, on 30 September 1914 the government issued a notice that it knew that certain business had issued vales o bonos for one centavo, arguing the absence of coins of this value. It ordered these notes to be withdrawn immediately, or the issuers would face punishmentEl Popular, Colima, Epoca Tercera, Núm. 67, 30 September 1914. Elsewhere it was reported that the governor noted that various businesses, for their own account and at their own risk, had put large quantities of vales into circulationAHEC, leg 847, 1914 notice September 1914, so there were probably other values. None are known but on 29 September J. D. León, of the Molinos de Nixtamal, had responded to a complaint that they were refusing to accept Constitutionalist notes. This, he said, was a slur. The truth was that as there was not enough fractional coinage it was impossible to give changeEl Popular, Colima, Epoca Tercera, Número 66, 29 September 1914 so perhaps the mills resorted to issuing vales.

It is also reported that the lack of coinage was such that the owner of the newspaper El Popular, on his own account and risk, issued vales so people could buy his paper, but was quickly reprehended by the authoritiesAHEC, leg. 847, 1914.

On 12 January 1915 various businesses wrote to the governor asking for permission to issue vales in small denominations in order to reactivate commercial activity, but this was deniedAHEC, leg 871, 1915.

However we do have a few instances from the first half of 1915. 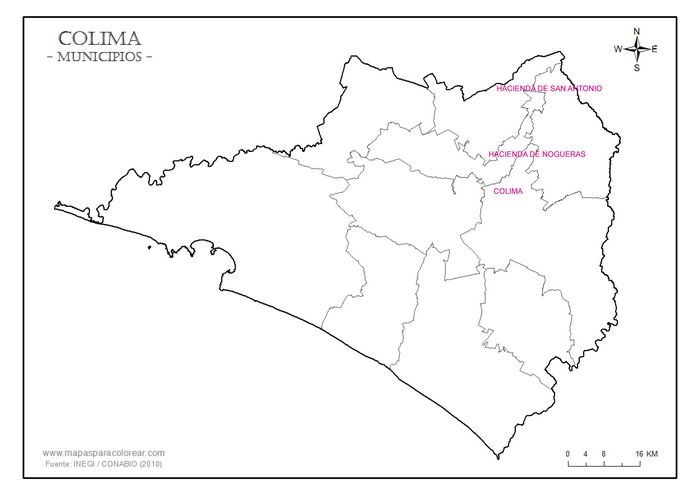 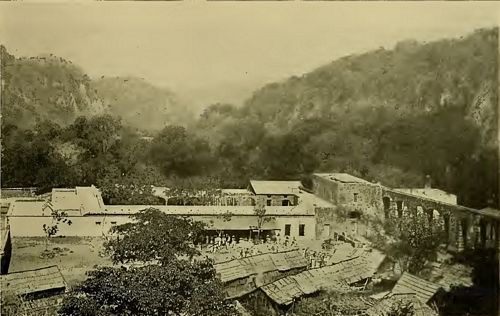 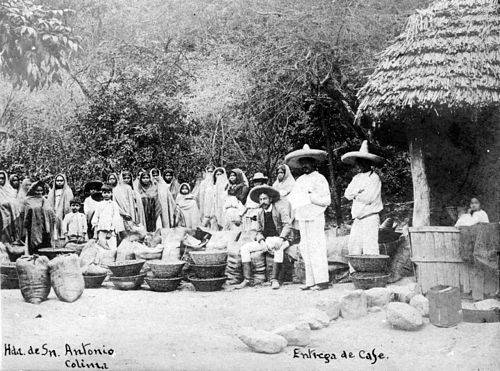 The hacienda of San Antonio, in Comala, just 10 kilometres from the crater of the Volcan de Colima, was originally of 3,392 hectares. In a letter written to President Calles’ Secretary of Agriculture and Development, its owner, Arnoldo Vogel wrote "I appeal to the testimony of all the people who are and know the property, that from a land without cultivation, of thick mountains and without any means of irrigation, I have made the only large coffee plantation that exists in the state"Registro Agrario Nacional (Delegación Colima, Colima) exp. 023/002 letter Arnoldo Vogel to Luis León, 21 August 1925.

This hacienda used round cartones to pay wages to its workers, either because of a lack of small change or because paying in vales tied the workers even more tightly to the hacienda and its company store (tienda de raya). This was a medium used by several hacienda in Jalisco and neighbouring states. The cartones have the denomination on the face and the same in Roman numerals (and often the hacienda’s brand) on the reverse. They usually carried the imprint “J.K.G” (for the printer, Juan KaiserJuan Kaiser Schwab was born in Leusigen, Switzerland in 1858, and in 1881, at the age of twenty-three, sought his fortune in South America, travelling from Chile to Bolivia and from Peru to Panama. In 1887 he settled in Mexico City, and was employed by the stationers “La Helvetía”. At the end of that year, with his elder brother Arnoldo, he acquired a bookshop, “Al Libro Mayor”, in San Luis Potosí. In 1899 he moved to Guadalajara and founded “Al Libro de Caja,” dealing in printing, binding, office stationery and books in general. The Kaiser brothers were instrumental in introducing the picture postcard to San Luis Potosí and, probably, Guadalajara. Juan Kaiser died in 1916, and was succeeded by his son, Javier, who in time handed the business over to its employees and went to live in Switzerland, his ancestral home. of Guadalajara) or some variation, and the number of the order (modelo) which allows the various issues to be dated. 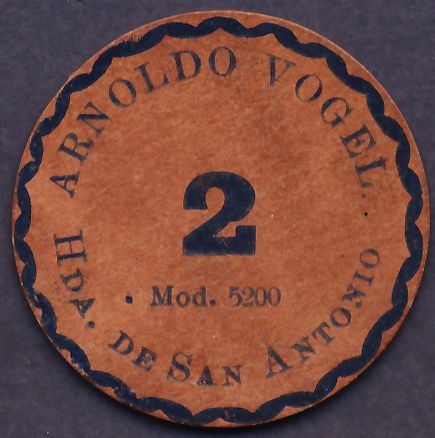 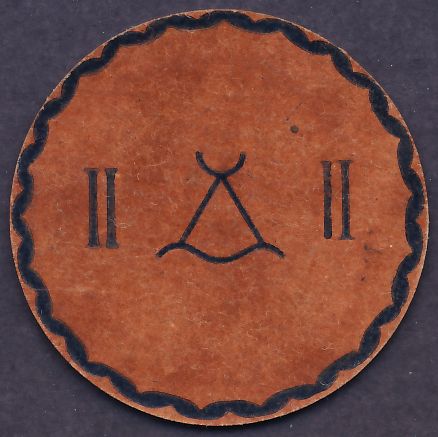 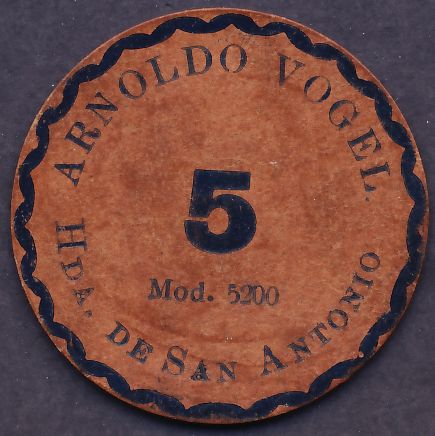 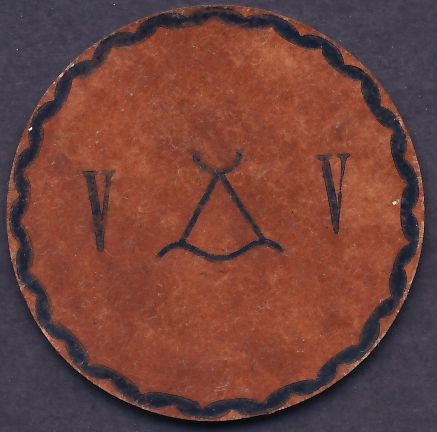 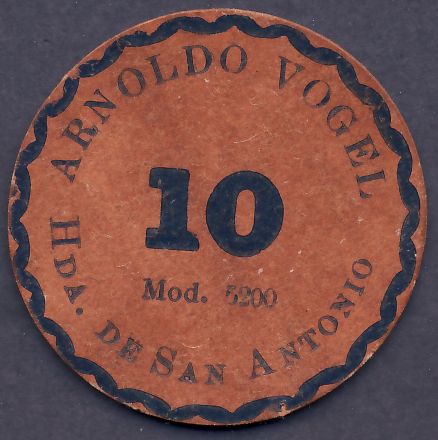 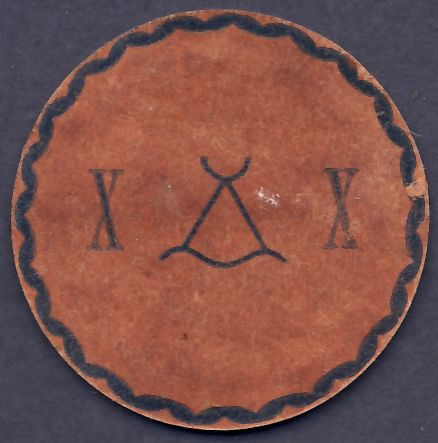 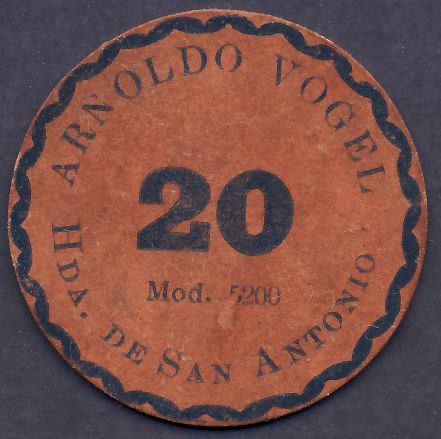 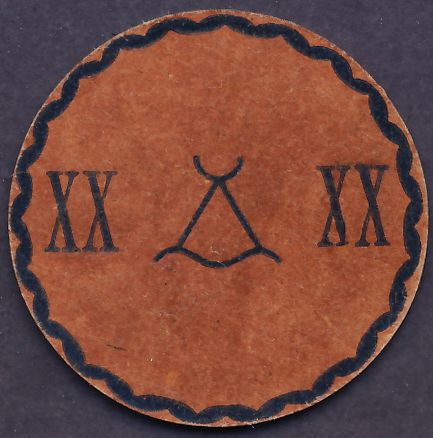 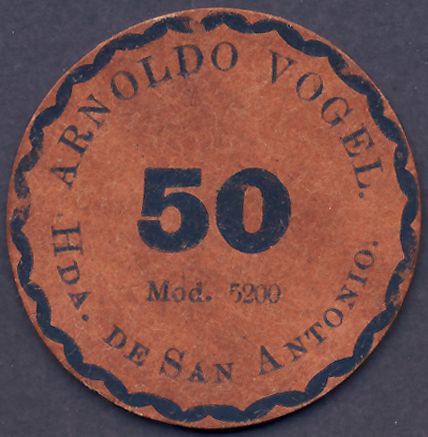 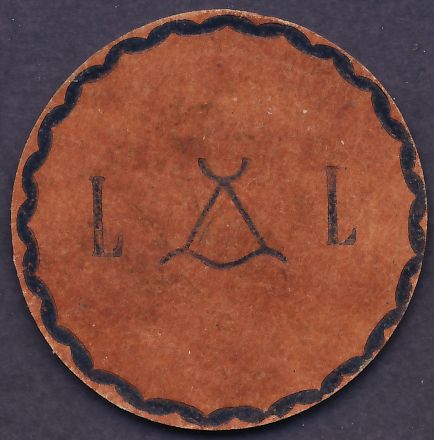 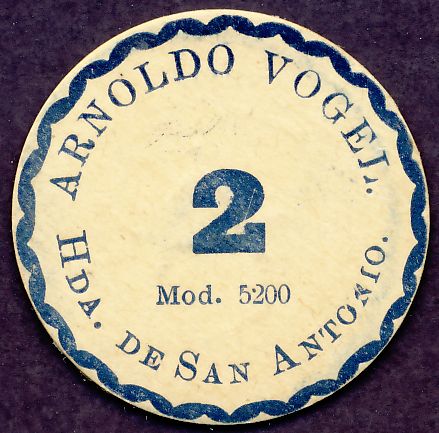 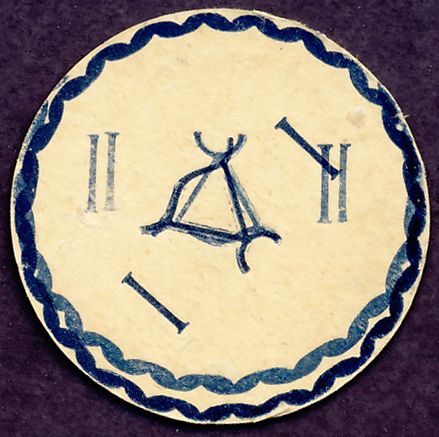 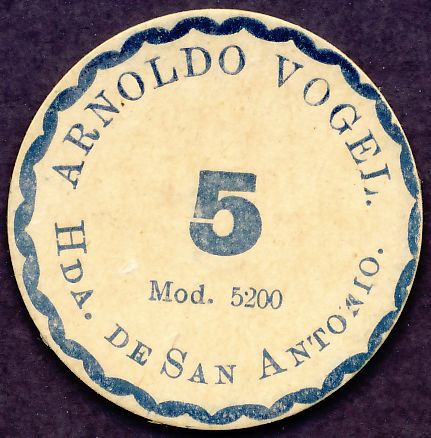 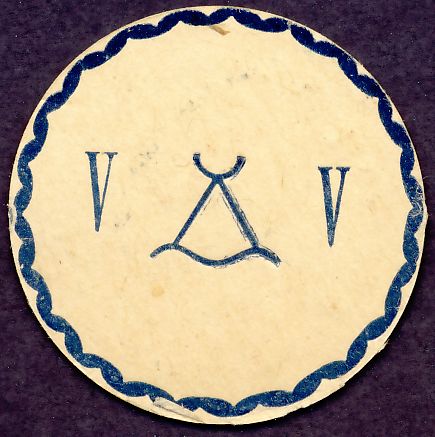 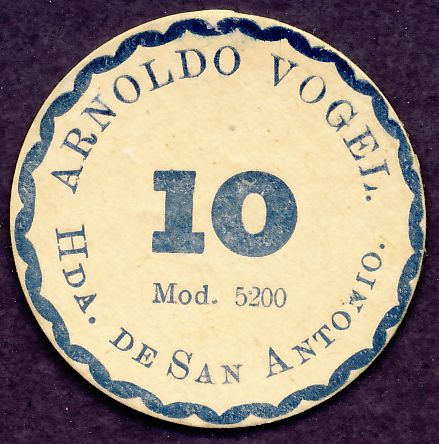 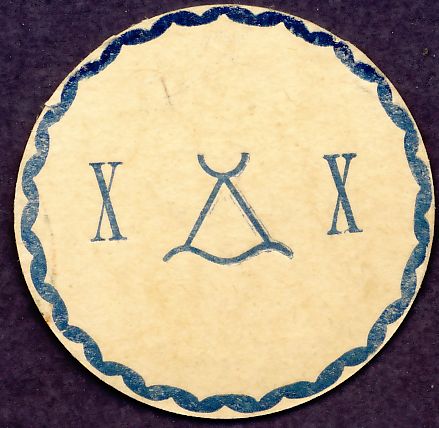 This was the second of four large sugar haciendas within the district of Comala, founded in 1704, and owned at this time by the Sociedad Vergal y Rangel, with Francisco M. Rangel as the manager. 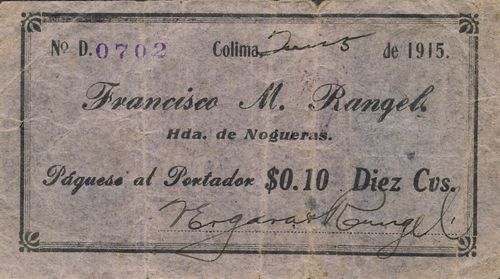 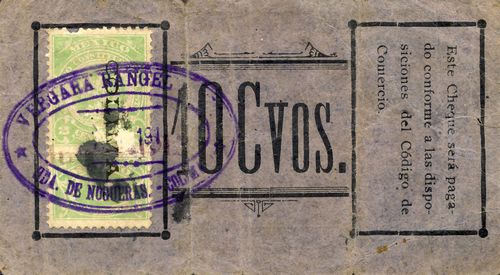 As bearer cheques (cheques al portador) these circumvented the ban on private issues of currency, and these cheques carried revenue stamps on the reverse and the legend “Este Cheque será pagado conforme a las disposiciones del Código de Comercio”.

This was a similar series of bearer cheques for 25 centavos, 50 centavos and one peso drawn on the Colima branch of the Banco Occidental de México, dating from July 1915. Luis H. y Hoyos was the manager of the branch. 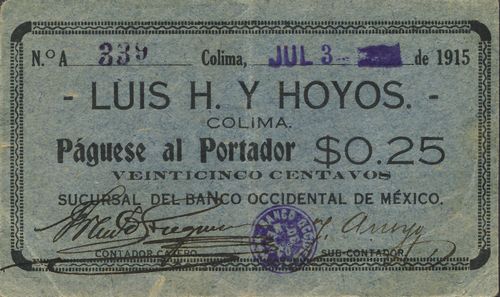 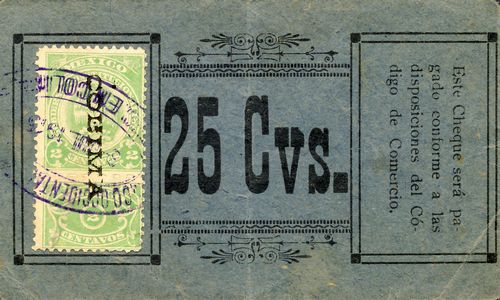 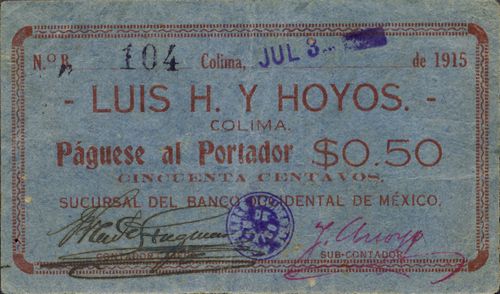 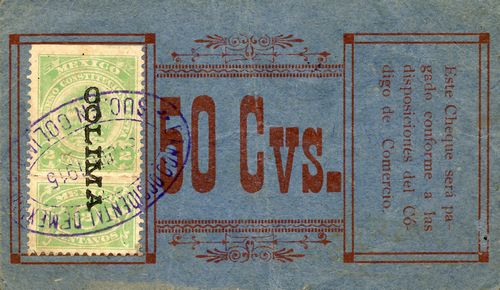 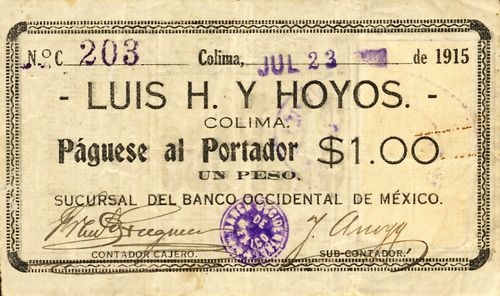 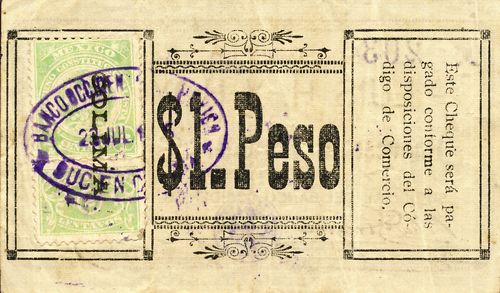 They have the hand signatures of [               ][identification needed] as Contador Cajero and J. Anuya as Sub-Contador and on the reverse have revenue stamps and the legend “Este Cheque será pagado conforme a las disposiciones del Código de Comercio”.