This institution was originally authorised on 24 March 1882 under the name of El Banco Hipotecario Mexicano and the corporation was formed on 24 April 1882 by Eduardo Garay and Francisco de Tavera. It was authorised to make mortgage loans in the Federal District and Baja California and was to issue cashier bonds and certificates of deposit but not banknotes. The following specimens, produced by Bradbury Wilkinson & Company of London, England are therefore illustrated here simply because they appear in most catalogues. 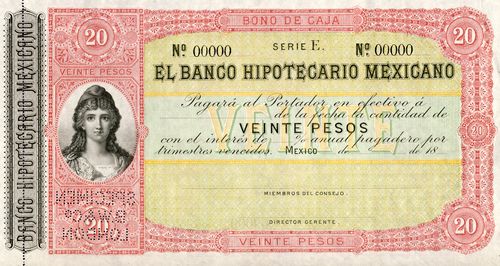 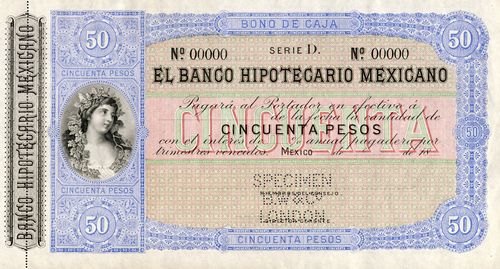 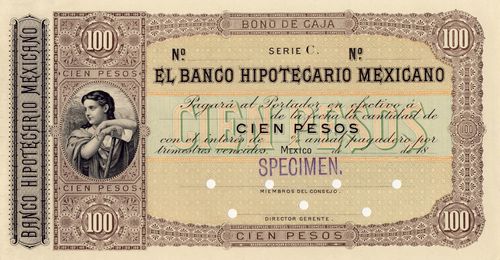 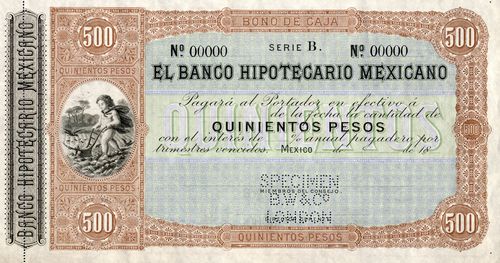 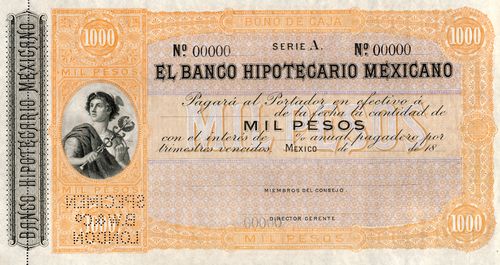 The specimens were printed with a counterfoil.

In August 1888 the bank's concession was modified and its name changed to El Banco Internacional é Hipotecario. In 1889 the bank was authorised to issue certificates of deposit (certificados del depósitos al portador). These certificados had to be denominated in pesos and 100 backed by gold or silver coins or bars in the bank’s vault. They were redeemable on demand and paid no interest.

The American Bank Note Company therefore produced the following set of notes. It engraved five special vignettes: Guatainotzin (C 376), Aztec stone (C 759), Children (The Two Republics) (C 384), Miguel Lerdo de TejadaMiguel Lerdo de Tejada was born in Veracruz in 1812. In 1849 he was counselor of the Municipal Government of Mexico City which he presided over until 1852. He was Secretary of State seven times during five different presidential periods. He also held posts as Secretary of Public Works, Secretary of Foreign Affairs and Secretary of the Treasury. He actively participated in the War of Reform and wrote a number of books. He died in 1861 in Mexico City. (C 156) and "Colgate's boy" (C 158).

So, these were not used. In the ABNC records are the comments "These are not "Notes" although entered as such in Order Book - they are Ctfs of Deposit" and "Mr. Gibbs says bank was not allowed to put these in use a/c their similarity to Bank Notes 10/21/15. see letter 12/23/13"ABNC.

The American Bank Note Company also produced a certificate of deposit for 1,000 grams of gold.

Known numbers are unsigned and unissued. 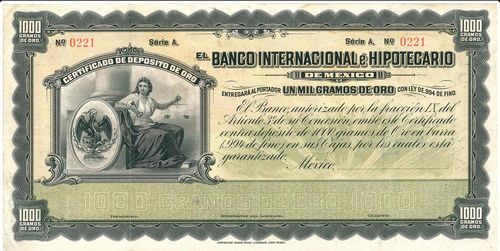 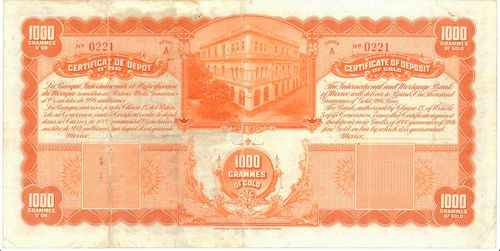