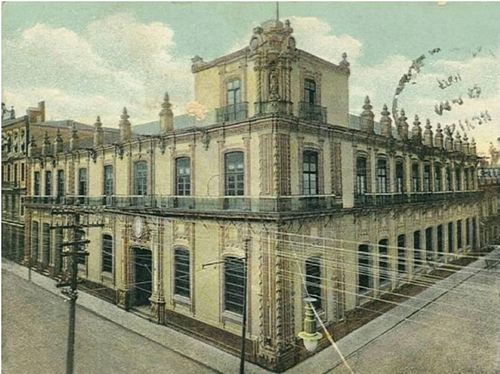 In the late summer of 1883 it was announced that Mr. Noetzlin would soon arrive from Paris to bring about the consolidation of the Banco Nacional Mexicano and Banco Mercantil Mexicano. Negotiations to that end were in fact initiated, and though several times they seemed to be on the eve of being broken off, the contract for the merger of the two banks was signed on 3 April 1884, when it was agreed that the consolidated bank was to be styled the Banco Nacional de México and to have a capital of $20,000,000 with 40% or $8,000,000 paid up. The Banco Mercantil Mexicano imprinted its prepotent stamp on the new establishment, its mangar, José V. del Collardo being appointed in the same capacity to the Banco Nacional de México, with Ramón Usandizaga as chief cashier.

An improved concession was given to the new bank (the concession was signed on 15 May 1884 and approved by Congress on 31 May 1884), whereby it was assured a practical monopoly of the issue privilege throughout the Republic, becoming also the financial agent of the government and its intermediary for the settlement and subsequent service of the public debt. The bank disclaimed any intention of driving other banks out but defended this monopoly on the ground that in a country like Mexico, whose immediate development was likely to be rapid, the multiplicity of issues would be liable to lead to inflation and the abuses of credit.

During its period as a bank of issue the Banco Nacional de México was responsible for issuing almost half of the banknotes in Mexico.

Under Obregón decree of 31 January 1921 the Banco Nacional de México was placed into Class A (for banks whose assets were greater than their liabilities) and allowed to resume all customary operations except the issue of bank notes.