The restoration of diplomatic and trade relations between Mexico, France and Britain in 1880 - interrupted in 1862 during French Intervention - and the resumption of the payment of external debt to European creditors, allowed Mexico to attract a mayor influx of direct foreign investment, particularly of French origin, into its banking sector.

This bank was founded by Edward NoetzlinNoetzlin was the most important foreign financier during the Porfiriato and involved in virtually all the key financial events in Mexico. The fact that Noetzlin was a foreign financier, involved in numerous “national” financial arrangements both helped him advance, and limited his successes. Perhaps most illustrative of the weakness that his foreign status conveyed was the infamous 1884 foreign debt negotiations between Noetzlin (and his European banking syndicate) and the Mexican government. While this debt arrangement was being scrutinized and debated in the Mexican Congress, street protests erupted in Mexico City denouncing the deal with shouts of “Muera a Noetzlin.” The arrangement was scuttled. Despite this and several other private incidents where Noetzlin’s status as a foreigner was used to discredit his role in Mexico’s national finances, Noetzlin traded gainfully in Mexico and in Europe on his social capital, on the value and worth of his social networks. In Mexico Noetzlin represented himself and his bank as part of a broad European capital network, a network he argued was necessary for Mexican entrepreneurs to gain access to lucrative foreign credit markets. Moreover he used similar arguments when he negotiated with a credit-strapped Mexican government or when it sought to diversify its financial exposure in Europe. Similarly, in Europe, Noetzlin represented himself as the consummate Mexican insider with a wealth of experience, contacts and intimates, and thus he was the necessary linchpin between European capital and the expanding Mexican market (Thomas Passananti, Banking on Mexico: Edouard Noetzlin and the Role of Financial Networks in Porfirian Mexico) and its shareholders were mainly identified with the Franco-Egyptian Bank. It was granted a federal concession on 16 August 1881 and began operations on 23 February 1882El Diario del Hogar, Tomo I, Núm. 122, 22 February 1882, with its main office in Mexico City and branches in Guanajuato, San Luis Potosí, Puebla, Veracruz and Mérida. It had a number of privileges, among which was the important one that its notes were accepted as unlimited legal tender in all offices of the federal government (a privilege soon restricted as far as branch issues were concerned).

The bank was governed in Mexico City by a Consejo de Administración, headed by Antonio de Mier y Celis and composed of Ramón Guzmán, Félix Cuevas, José María Bermejillo, Sebastián RobertJoseph Ollivier and Co held a small percentage of the Banco Nacional Mexicano stock, so it was able to place Sébastien Robert, then manager of La Ciudad de Londres. on the bank's first board and to bring about the appointment of Sylvain Balp to the board of the Veracruz branch. and Gustavo Struck. In Paris a Junta de Paris, composed of members of some important European banks, oversaw the general direction of the bank.

On 15 May 1884 it merged with the Banco Mercantil Mexicano to form the Banco Nacional de México. Both banks agreed to retire their notes within two years and replace them with notes of the new bank. As a consequence surviving notes are extremely rare. 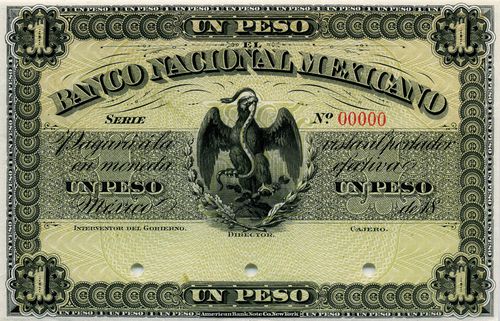 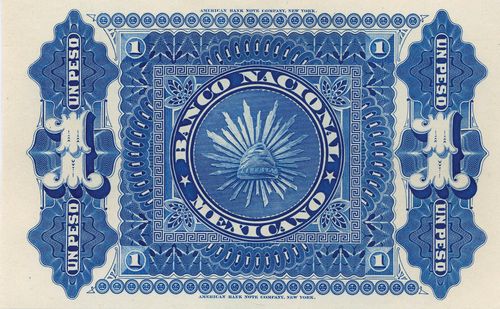 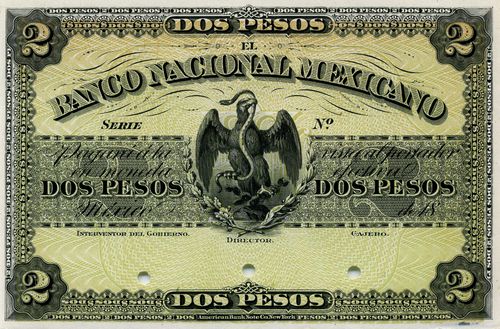 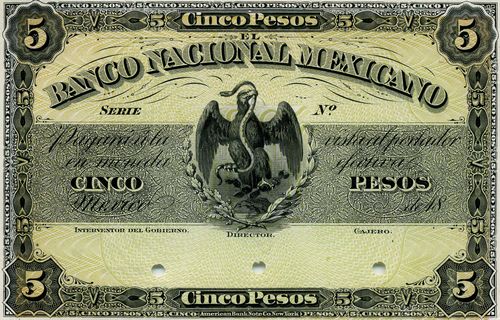 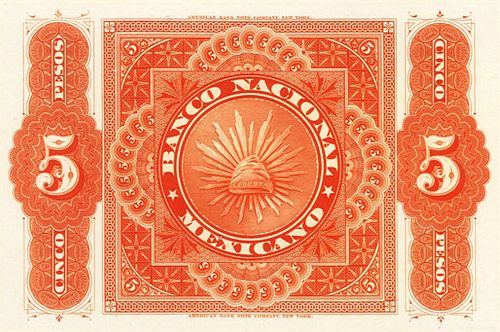 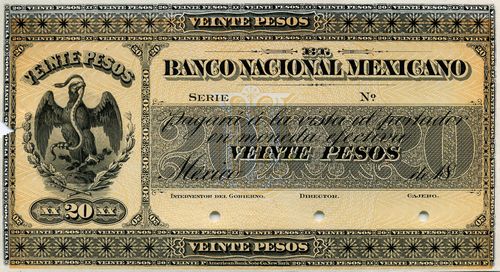 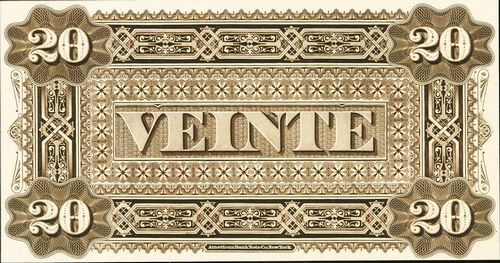 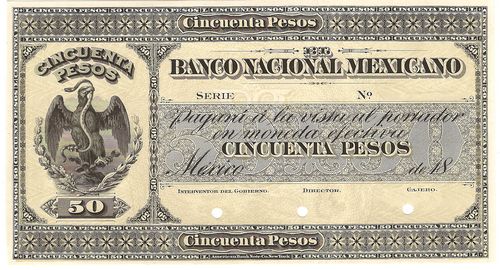 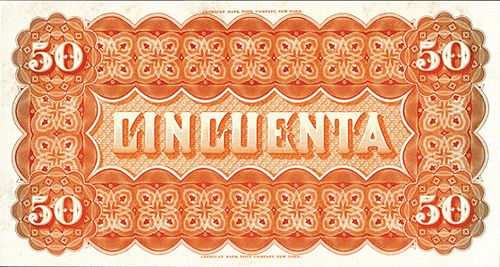 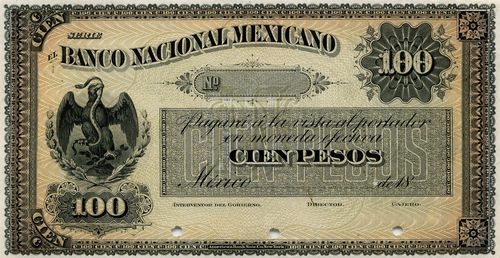 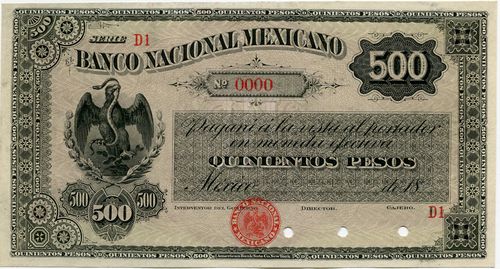 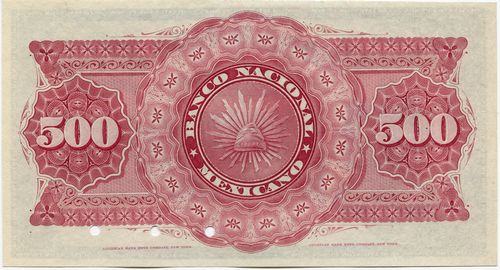 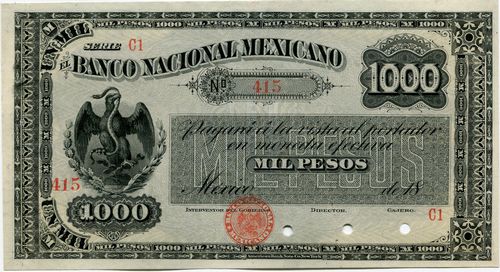 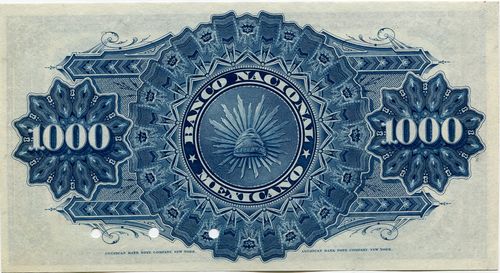 The bank’s notes state that they will be paid in legal tender (moneda efectiva) but the day after it opened the bank issued a notice that in the capital they would always be redeemed in silver (pesos fuertes)El Foro, 25 February 1882.

The reason for the branch overprints was the rule for redeeming notes. On its opening the bank published a notice that notes issued by branches would have two stamps (one central and one local). The branch would reemburse its own notes but had no obligation to remburse the notes of Mexico City or of other branches. Branch notes could be reembursed in the head office, according to rules that the bank would issueEl Diario del Hogar, Tomo I, Núm. 122, 22 February 1882.

By December 1882, after overcoming certain difficulties, the bank’s notes were being accepted as legal tender in the important Progreso customs houseLa Patria, 30 December 1882.

The issue of a branch in San Luis Potosí was discussed by the bank’s board on 24 December 1881 where it was reported that talks with the state government had been concluded and everything indicated a favorable environment. The next step was to address "three of the main people". of the capital" in the state, namely Matías Hernández Soberón, Felipe Muriedas and José Encarnación Ipiña, to get the support of “su ilustración e influencia (their illustration and influence)" to continue with the procedures for opening a branch. To do this, the board sent a telegram to these gentlemen to know if they would be willing to support the Banco Nacional Mexicano “con su concurso (with their support)”, to which they replied that they were willing. So, the board agreed to allocate fifty shares for each of them, of the thousand reserved for branches. AHBanamex, Banco Nacional Mexicano, actas del Consejo de administración, 24 December 1881. State governor Pedro Díez Gutiérrez, proposed and received the approval of the state congress to celebrate a contract with the bankPeriódico Oficial, 16 November 1881: ASLP, Secretaría General de Gobierno, Colección Leyes y Decretos, 11 November 1881 and concluded a contract with Félix Cuevas and Ramón G. Guzmán, representing the bank, on 5 January 1882 AHBanamex, Banco Nacional Mexicano, contratos de concesión y estatutos, 21 june 1882.

The contract decreed the circulation of the bank’s banknotes in the offices of the state "to the exclusion of those of any other credit establishment established or to be established or any paper money, although the banknotes issued by the Nacional Monte de Piedad can be received by these offices. In compensation for the advantages granted by the Potosi government, the Banco Nacional Mexicano was bound to establish a branch in the state within a year and would not charge more interest or income on transactions than the norm in Mexico City. In addition, the bank’s branch was obliged to open a current account to the State Treasury AHBanamex, Banco Nacional Mexicano, contratos de concesión y estatutos, 1881: ASLP, Secretaría General de Gobierno, Colección Decretos y Leyes, 5 January 1882.

On 12 July 1882 the bank appointed Santiago Wastall as director of the branch. The initial quantity of notes designated for the branch was $200,000, which Wastall personally transported from Mexico City.AHBanamex, Banco Nacional Mexicano, actas del Consejo de administración, 27 July 1882.

The Consejo de administración and the Junta de vigilancia of the branch were Matías Hernández Soberón, Felipe Muriedas, José Encarnación Ipiña, with Wastall as gerente and Celestino Labarthe as cajeroPeriódico Oficial, & November 1882.

Three of the four members of the Junta de viligancia were related by blood ties (Soberón and Ipiña) or by mutually supportive relationships (compadrazgo) (Soberón, Ipiña and Muriedas). And they had previous experience in privately granting credits. On 30 October 1882, the branch was inaugurated and the local board gave notice to the Board of Directors in Mexico City the following dayAHBanamex, Banco Nacional Mexicano, actas del Consejo de administración, 31 October 1882. The bank was opened to the public on 1 November 1882El Siglo Diez y Nueve, 14 November 1882; La Patria, 18 November 1882; Periódico Oficial, 7 November 1882.

The branch opened in 1882 under Mariano Pasquel, a member of an ancient and moneyed family with links to Veracruz and Mexico City(?).

On 17 October 1882 the governor of Yucatán, General Octavio Rosado, and J. Mammelsdorf and Santiago Kulp, for the bank, agreed a contract to open a branch in Yucatán. The contract allowed the bank to issue banknotes which would be accepted as legal tender in all payments to the state and municipalities with the bank obliged to redeem them in cash at the bank’s branch.

The branch opened on 15 November 1882Le Trait d’Union, 25 November 1882 with a capital of $300,000 and under the management of Carlos VaronaThe junta de viligancia was composed of Pedro de Regil y Peón, Manuel Dondé Cámara and Camilo Cámara. The cajero was Emilio Márquez.