“With the boom in mining, agriculture, and commerce, the demand for credit [in Oaxaca] increased. In the late 1880s a group of prominent Oaxacans visited General Díaz to advocate for the establishment of a branch of the Banco Nacional de México, which they argued would offset the usury of local moneylenders and provide access to funds for economic development. Always attentive to the welfare of his patria chica, Díaz persuaded the directors of the Banco Nacional to found this branch. Given the threat of bandits, the crucial problem facing this project was how to transport the initial funds of $800,000 (no railroad yet existed). The directors of the Banco Nacional asked the president for an escort of rurales or even an army detachment to accompany the transport of this money. Díaz replied that a detachment of soldiers would call even more attention to the party. The progress-minded Bishop of Oaxaca, Eulogio Gillow, came up with an original solution. President Díaz advised the bank officials that their representative and the $800,000 in bills would travel to Oaxaca with Gillow: “I will put the treasurer who will carry the funds in contact with the bishop and traveling together, with the object of maintaining the utmost reserve, the money will surely arrive at its destination. Thus, if the illustrious Mr. Gillow treats the bank’s employee as one of his most intimate friends, having placed the valise in the coach, or on the prelate’s litter during the day and under his bed at night, until they arrive in Oaxaca”. Thus did the Catholic Church enable the establishment of a branch of the Banco Nacional de México in the city of Oaxaca in 1888”Francie R. Chassen-López, From Liberal to Revolutionary Oaxaca, Pennsylvania University Press, 2004..

In December 1889 it was reported that Miranda had arrived in the state capital, bringing $100,000 in notes to be placed into circulationLa Patria, 29 December 1889. 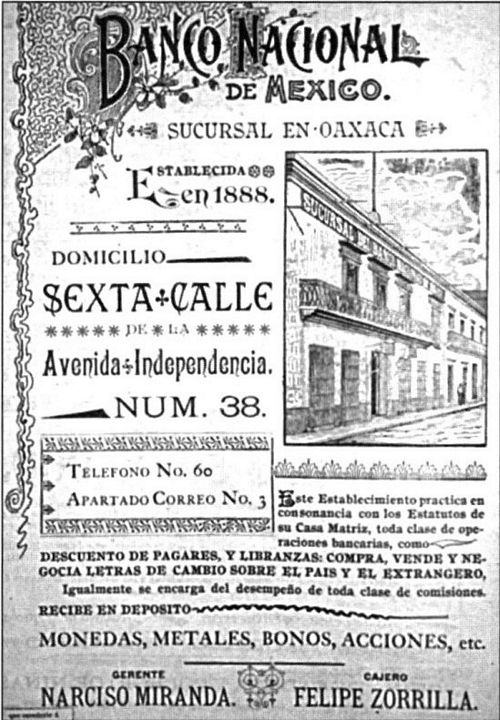 In August 1909 the bank fired the current manager, Guillermo A, Esteva, provoking protests in support of Esteva from the leading businessmen and personalities in the cityEl Imparcial, 4 September 1909,

The bank inherited the existing branch of the Banco Nacional Mexicano that had opened in 1882. Mariano F. Pasquel was the first manager.

The bank inherited the existing branch of the Banco Mercantil Mexicano that had opened in 1882.

So the bank inherited the existing branch of the Banco Nacional Mexicano that had opened in 1882. Santiago Wastall continued as manager until 1 December 1884 when he was replaced by Eduardo C. PitmanEl Tiempo, 28 December 1884.