The $20 note is particularly striking, having as its main vignette a portrait of the early humanitarian, Fray Bartolomé de las Casas. The image is taken from an equally impressive painting by the Mexican Félix Parra, which now hangs in the National Art Museum in Mexico City (though nowadays it would probably be considered too kitsch). 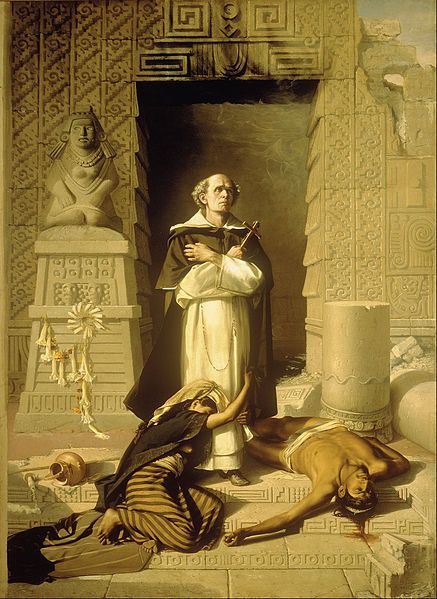 Bartolomé de las Casas (c. 1484 – 1566) was a 16th-century Spanish historian, social reformer and Dominican friar. His extensive writings, the most famous being Brevísima relación de la destrucción de las Indias (A Short Account of the Destruction of the Indies) and Historia de Las Indias, chronicled the first decades of colonization of the West Indies and focused particularly on the atrocities committed by the colonizers against the indigenous peoples.

In 1542 de las Casas was appointed Bishop of Chiapas, but served only for a short time before he was forced to return to Spain because of resistance by the operators of the feudal encomiendas to the reforming ‘New Laws’ that de las Casas had persuaded Charles V to enact, and because of conflicts with Spanish settlers over his pro-Indian policies and activist religious stances. The remainder of his life was spent at the Spanish court where he held great influence over Indies-related issues. Although he failed to save the indigenous peoples of the West Indies, de las Casas’ efforts resulted in several improvements in the legal status of the natives, and in an increased colonial focus on the ethics of colonialism.

It has long been noticed that there are two varieties of this $20 note. Apparently Carlos Gaytán believed that both were genuine, even though he thought that one was printed in Mexico by lithography on hard paper and not by the ABNC. Gaytán reasoned that at that stage of the revolution the bank could no longer afford the expense of having its notes printed in New York.

However, Gaytán was wrong.

Certainly, during the revolution, because of urgency, economy and speed of delivery, Mexican banks, including the Banco de Londres y México, did resort to locally produced issues from Bouligny & Schmidt and the American Book & Printing Company but these were new designs and a reputable bank would not have risked reproducing the American Bank Note Company’s imprint. The ABNC also managed, despite occasional difficulties and delays, to continue deliveries to Mexico throughout the revolution.

These notes were, in fact, good quality counterfeit produced in the United States.

In August 1916 large quantities were reported to be circulating in San Antonio, Texas. The U. S. Secret Service began to investigate after banks in Laredo, Eagle Pass and El Rio bought up quantities of the false notes in all good faith. A large packet of notes was taken to Mexico City, and the bank issued a notice to other bank, listing the differences between the genuine and counterfeit notes. Their list was:
1) the paper used was approximately 60% linen whilst the genuine used 90% linen
2) the colour or tint in the genuine was an orange yellow (amarillo anaranjado) but darker in the counterfeit
3) the colour or tint behind the shading in the vignette was light in the genuine, but darker in the counterfeit so the figures were less embossed
4) the 20 in the bottom left hand side was more blurred in the counterfeit
5) the lettering in the promise to pay were entirely separate one from the other.

Charles Blackmore, the ABNC resident agent in Mexico City, sent an example to New York where experts examined it and marked up the most easily detected differences, with these listed in an accompanying table, as followsABNC:

I shall leave it to others, who possess actual notes rather than scans, to try to identity all the features that the ABNC recorded. Suffice it to say, that the two versions are easily distinguishable at first sight.

In late September 1916 Sr. Felix Martino, a director of the bank, reported to the ABNC and the Secret Service that the factory or workshop producing the notes was established in San Antonio and the principal directors were said to be Messrs. Kelly and Levi and two individuals by the name of Cicero from the frontier states of Mexico. Mr. Kelly was said to have gone to New Orleans on 12 September with a large quantity of notes to place on the marketSD papers, 812.5158/56.

These counterfeit notes resurfaced in 1922 in Torreón, Durango. On 30 March Ciro Melendez, from that city, sent the ABNC a sample note (H 293618, dated 1 October 1913) which the bank had said was counterfeit. Poor Melendez had almost $500 in such notes. Then on 27 April Isauro Martínez, who owned the local cinema, sent H 258851, which the ABNC acknowledged was false. He also had a quantity of these notes.

Almost a decade later, on 20 January 1931, the Mexican newspaper Excelsior reported that the police had recovered $3,460 in counterfeit $20 notes after a José Palemón García had tried to exchange some in Toluca and been arrested in flagrante delicto. Palemón García confessed that he had received them from a Manuel Garza Méndez in Monterrey and Garza Méndez, in turn, claimed he had received them from a José González more than ten years before but knowing they were false had given them away to Palemón GarcíaExcelsior, 20 January 1931. Blackmore, still the ABNC agent, reported that the bank did not believe many counterfeits were in existence and that the Comité Liquidador de los Antiguos Bancos de Emisión, which was handling the liquidation of old banknotes, was aware of the secret marks that genuine notes carried and so would detect any forgeries. The bank’s manager stated that the original counterfeiting took place in New Orleans some years ago and that the false plates were destroyed by the police with the intervention of the Mexican consul at New Orleans, but he thought that the police probably failed to locate all the false plates and that some of them were sent to some place in the north of MexicoABNC. This is probably a misunderstanding of Kelly’s connection with New Orleans.