Little known among collectors due to their extreme rarity, the first series of banknotes bearing the Banco de México title were printed, and perhaps issued, under Emperor Maximilian’s short rule.

Despite its name, this initial Banco de México was a private venture. Upon the request of a group of European bankers led by one Michel HeineThe Société Internationale Financière submitted a proposal for a Banco Imperio Mexicano on 19 November 1863. The bank would be modelled on the Banque de France since its operation should be "under the protection of His Majesty ... and the supervision of his Government" which would be represented by a commissioner and an inspector, next to whom would be the Board of Directors consisting of a managing director and three members who would be appointed by the founding partners in Paris and London during the first five years, and, subsequently, appointed or elected by the meeting of shareholders. The institution would be able to carry out all kinds of credit operations to the government and among individuals, in addition to having a monopoly on the issue of banknotes that would be recognized to the bearer and would have legal tender (with both the notes issued by the parent company and those of branches being accepted and exchanged at the Treasury offices). Finally, the firm undertook to open an account to the imperial government for 10,000,000 francs (equivalent to 50,000,000 pesos) backed by resources from customs and other tax contributions, while the government was responsible for providing the land necessary for the construction of the parent building. It was requested that the bank be exempt from all taxes. (AGN, II Imperio, vol. 10, exp. 47, "Bancos nacionales", 1864), an ordinance authorized the creation of the Banco de México on 2 January 1864La Sociedad, Tercera Época. Tomo II, Núm. 226, 30 January 1864. Michel Heine was a preeminent French banker who founded Banque A. et M. Heine and was later a regent of the Banque de France.

The bank was required to be operational within a year of having its statutes approved and was given a concession to operate for a period of 30 years. The initial capital would be ten million pesos, divided into 100,000 shares of 100 pesos each. The bank was a Banco de descuento, de circulación y de depositos - meaning it was authorized to make investment and deposit operations in addition to issuing circulating paper money. It is naturally the latter operation which interests us the most, and the relevant parts of the imperial decree translates as follows:

Article 5 - The Bank will have the exclusive privilege of issuing banknotes payable to the bearer in their location of issue. These banknotes will be considered as legal tender, and will be received on par with the coinage by the public offices and national administrations. These agencies will be authorized to turn in all these banknotes to the Bank, regardless of their location of issue, on account of the Government and in any of its branches.
The Banknotes will be signed by an administrator specifically designated for this purpose, by the cashier and by the accountant of the Bank, either from its main office or the branch where the issue is made.
The total amount of issued banknotes will be no greater than the triple of the extant coinage deposits.
Article 6 - The Government obliges itself to refrain from issuing any sort of paper money or any promissory notes payable to the bearer and backed up by the State, or authorizing any such issues by another similar institution for the duration of the present concession.

The operations of the Banco de México will consist of issuing banknotes payable to the bearer upon their presentation. These banknotes will be legal tender in conformity with the exclusive privilege established in the decree of the concession. They will be received on par with circulating coinage by any of the Treasuries and Offices of Exchequer of the Nation, regardless of their location of issuance. The payment of a banknote will be made at the corresponding branch that issued it. The circulating amount of these banknotes will be no greater than the triple of the existing deposits in the Bank.

The Board of Directors of the bank would consist of five members residing in Paris, France, with an Administration Council residing in Mexico consisting of five to ten members and a General Director who would be in charge of the local operations.

This authorisation was granted by Juan Nepomuceno Almonte, one of the triumvirate which, after the Mexican assembly decided to invite Maximilian to be Emperor in July 1863, formed the Regency of the Mexican Empire. Maximilian formally accepted the crown on 10 April 1864, and set sail for Mexico, arriving in Veracruz on 28 May and reaching the capital on 12 June.

Maximilian in fact had liberal ideals and refused to sanction Almonte’s decision because he was opposed to a monopoly and felt that Mexicans rather than Europeans should be involved in any development of the country’s financial sectorLa Sociedad, Tercera Época. Tomo II, Núm. 321, 5 May 1864. On 14 May the French Minister of Foreign Affairs wrote from Paris that that Finance Minister thought it very regrettable that Maximilian had not thought to ratify the concession granted to Hottinger y Cía as currently drafted, based on the principles of the Banque de France. However, the founders were prepared to accept the modifications suggested to satisfy the Emperorletter Drouyn de Lhuys to Marqués de Montholón, French Minister in Mexico, 14 May 1864 in Genaro García, Documentos Inéditos ó Muy Raros para la Historia de México, Tomo XX,.Mexico, 1908. A commission led by Count Carlos de Germiny renegotiated the concession and on 14 February 1865 signed a new contract with the group of French bankersEl Diario del Imperio, Tomo II, Núm. 214, 16 September 1865 though this was not published in the official gazette until September.

It is noticeable that both Almonte’s and the latter concession granted a national monopoly to this Banco de México in issuing banknotes but William Newbold was already in Mexico City establishing a branch of the Banco de Londres, México y Sud América.

Although Mr. Callant indicates in his article that the issue of the notes was commissioned by Napoleon III, it is more likely they were commissioned by the Board of Directors of the bank.

Known notes exist in four denominations. All are dated 1866. We are currently aware of a total of 15 notes including all denominations. They consist of four $10 notes, three $20 notes, five $100 notes and three $200 notesUpdate. On 12 April 2022 CGB Auctions offered a $10, a $20 and a $100 note, all unsigned two-sided proofs. These might need to be added to these totals.. Looking at the group as a whole, there is little consistency.

$10 notes - All of the notes are blue, three are uniface(?) and one is certainly a proof. One has signatures and is further described below. 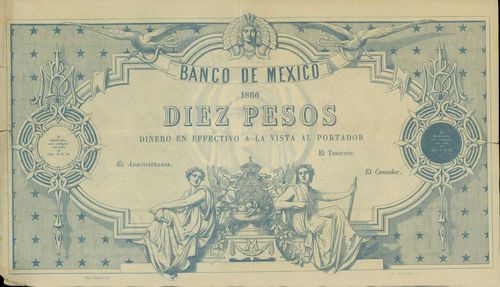 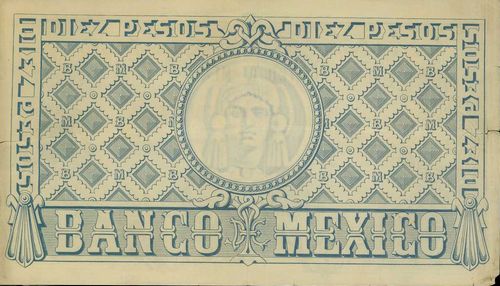 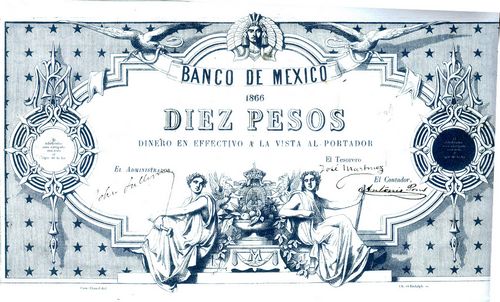 $20 notes - Of the three notes one is a blue proof in uniface and the other is one of only three known notes in the series printed on both sides of a single sheet. Interestingly, one side is printed in black and the other side in blue{?). The third $20 note cannot be verified as to colour as we only have an old black and white photo. 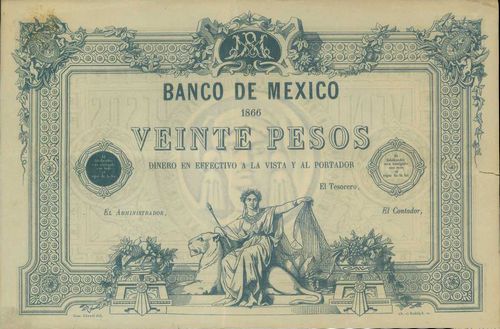 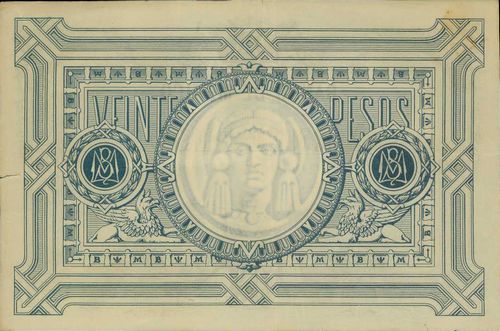 $100 notes - All of the five notes have serial numbers except one (no other denominations have notes with serial numbers) and four of them are uniface(?). One has signatures and is further described below. 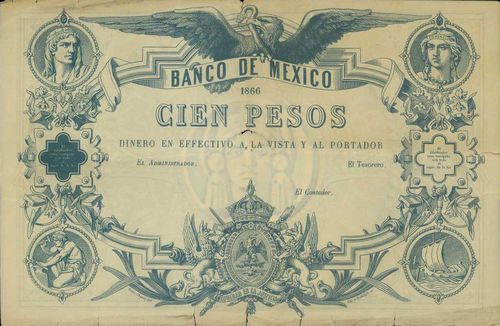 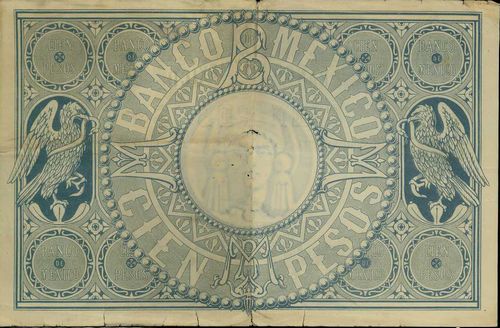 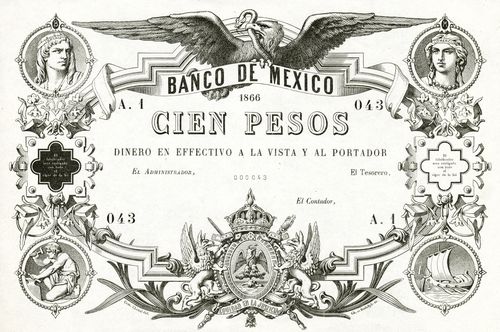 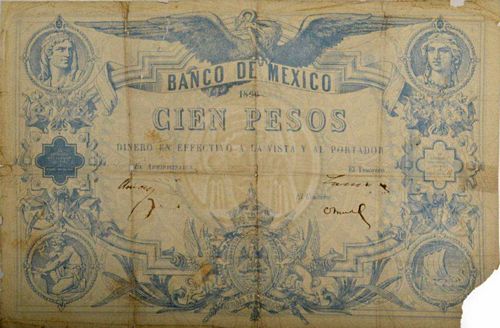 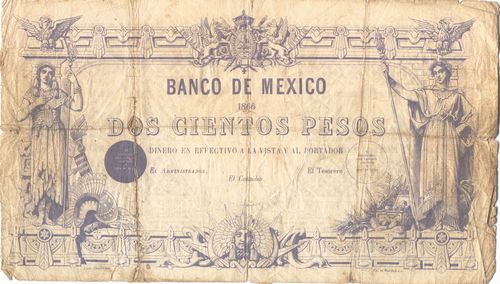 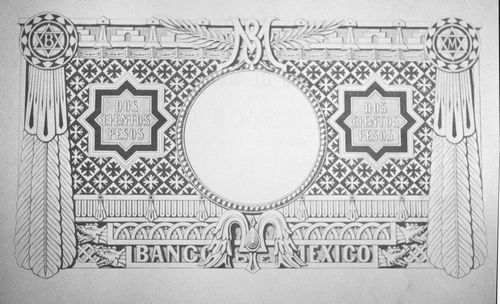 In looking at the notes as a series, it is interesting that the $100 peso, which is the only denomination known with serial numbers, is somewhat different in design almost as though part of a separate series.

There are spaces on the notes for the signatures of the Administrador, the Tesorero and the Contador. Two notes have signatures on them. One of them is a $10 note in the collection of Salvador Sotomayor and the other is a $100 note in the Banco de México collection. Both are printed on both sides and neither have serial numbers. Interestingly, all of the other $100 notes are printed on one side and all have series and serial numbers. In the unlikely event that any of the signatures are legitimate, they are

There is not enough evidence here to draw any conclusions. However, it seems likely that most of these notes were patterns, proofs and perhaps, in the case of the $100 notes, remainders. Since all known notes bear the date 1866 and Maximilian’s imminent ousting was becoming apparent, we think it is unlikely that any notes actually circulated, although the notes in the Banco de México collection and Sotomayor collection leave some room for speculation.