Occasionally catalogues (from Gaytan onwards) and auctions include notes with a face value and occasionally serial numbers printed as part of an electoral campaign and used as receipt for contributions. These are not paper money but are listed here for the sake of completeness.

Nicolás Zúñiga y Miranda (13 May 1865 – 8 July 1925) was a Mexican eccentric who was famous for being a perennial candidate in his country's presidential elections. Although he never won a significant share of the votes, he considered himself to be the victor every time.

Zúñiga y Miranda was born in Zacatecas into a family of old Spanish nobility. He went to Mexico City to study law and became a lawyer, but first gained fame in 1887 when he claimed to have invented a machine that could predict earthquakes. He successfully predicted an earthquake that struck the capital that year. After this success, he predicted that on August 10 of the same year Mexico City would be completely destroyed by simultaneous eruptions of the Cerro del Peñón and Popocatépetl, which caused several inhabitants to leave the capital at that date. The prediction proved to be false. He founded several ephemeral magazines in which he attempted to predict natural disasters or other events, including the end of time, without much success.

He had almost disappeared from public attention when he announced his candidacy against Porfirio Díaz as the 'candidate of the people' for the 1892 presidential elections. Zúñiga claimed to have been victorious in the elections and protested against the alleged election fraud. Díaz had him arrested and he was sentenced to 25 days of solitary confinement. After being released Zúñiga made himself a presidential sash, declared himself to be the 'legitimate president' and called Díaz a usurper. In 1896, 1900, 1904, and 1910 he again participated in the presidential elections, every time with the same result: he received only a small number of votes, claimed fraud, and declared himself to be president. It was said that Zúñiga honestly believed he was elected by the people, and turned into a popular figure in Mexico City. He was often invited for parties, in restaurants or for other public events, in which the population treated him as if he really were the president. The Díaz government considered him to be a madman who was amusing rather than dangerous and decided not to take action against him any more, while for the Mexican population he served as a way to laugh about the lack of democracy in the country. Zúñiga always dressed as an English gentleman, wearing a cylinder hat, gloves, and a monocle, and smoking a pipe.

In the collection of the Banco de MéxicoCNBanxico #6634 is a bono pagarés (an acknowlegdement of a future debt) dated 12 October 1912 by which Zuñiga’s party, the Club Politico Nacional, promises to pay the bearer $100 seventy days after Zuñiga assumes the presidency. On the reverse it states “los tenedores de estos bonos pagarés que sean partidarios de nuestra causa, tendrán derecho a empleo o concesión si tienen aptitud y buena conducta (holders who support our cause will have the right of employment or concession, if they have the aptitude and are of good conduct)”.

After the revolution Zúñiga continued to participate in elections: in 1917 against Venustiano Carranza and in 1920 against Álvaro Obregón. Although he never got more than a few thousand votes he remained popular and reminded Mexicans of the fact that Mexico had not yet become a full democracy after the revolution. Zúñiga last participated in elections in 1924, during which he received death threats from supporters of the 'official' candidate Plutarco Elías Calles. He died a year later. 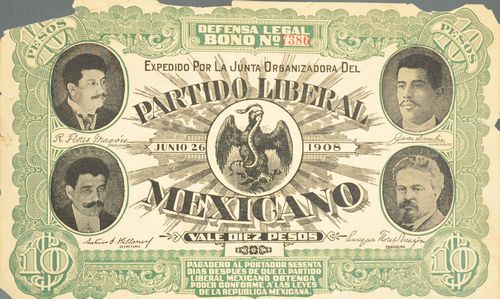 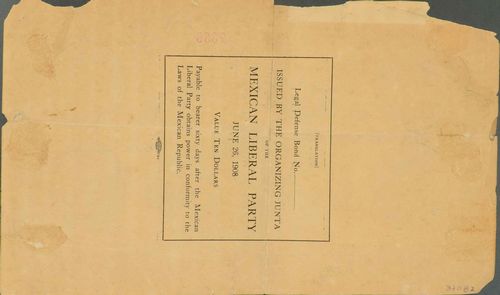 This single example of a Legal Defense Bond for $10 was to be (re)payable sixty days after the Partido Liberal Mexicano achieved power. It carried the portraits and signatures of Ricardo Flores Magón (president), Enrique Flores Magón (treasurer), Juan Sarabia (vice-president) and Antonio I. Villarreal (secretary) and had an English translation on the reverse.

The Partido Liberal Mexicano was started in August 1900 when Camilo Arriaga published a manifesto entitled Invitación al Partido Liberal (Invitation to the Liberal Party). The invitation was addressed to Mexican liberals who were dissatisfied with the way the Porfirio Díaz government was deviating from the liberal Constitution of 1857. Arriaga called on Mexican liberals to form local liberal clubs, which would then send delegates to a liberal convention. The first Convention was held in San Luis Potosí in February 1901. Fifty local clubs from thirteen states sent 56 delegates. The Convention produced fifty-one resolutions which called for the organization of the new Liberal Party, propagation of liberal principles, development of means to combat the political influence of the clergy, establishment of means to improve the administration of justice, proposals calling for guarantees of the rights of citizens and real freedom of the press, and proposals favouring complete self-government at the local level. They also called for support for free secular education in the primary schools, the spread of liberal ideas among the lower classes, the establishment of liberal publications, and the taxation of Church income.

In April 1901, the new party opened a branch in Mexico City, and Ricardo Flores Magón and his brothers joined and became active members. Always a bit more radical than most members, Flores Magón was forced into exile in January 1904. Finally settling in San Antonio, Texas, Flores Magón called for radical members of the Liberal Party to follow him in a new organization. On 28 September 1905, the radical liberals, led by Flores Magón, formed a new organization called the Junta Organizadora del Partido Liberal Mexicano, with the aim of violently overthrowing the Díaz government. From 1905 until its suppression in 1918, the Junta was composed of a compact group of people linked to the edition of the newspaper Regeneración The first board included Ricardo Flores Magón, aspresident; Juan Sarabia, as vice president; Antonio I. Villarreal, as secretary; and Enrique Flores Magón, as treasurer.

On 16 September 1906, the Partido Liberal Mexicano initiated their revolutionary plan. When the groups operating in the United States took over the main border customs and reinforced the supply of weapons, the 44 guerrilla groups (totalling 2,200 fighters) all over the republic would rise up in arms. However, most of the liberals were discovered by the US police, who seized weapons and documents that discovered the insurrection plans, so it had to be postponed. 26 September was set as the new date to start the Revolution. A group of liberals attacked Jiménez but after a few hours federal forces arrived, outnumbering and forcing them to flee. Other attacks were carried out in Monclova, Zaragoza, Piedras Negras and other small towns in Coahuila, to similar results. On 30 September, there was a rising in Acayucan, Veracruz, where clashes against the army lasted four days. Most of the rebels died. On 16 October 1906, a third insurrectional attempt was made in Camargo, which was also defeated. On 19 October, the group from El Paso, organized by Ricardo Flores Magón, ventured into Ciudad Juárez, but were discovered crossing the border by federal soldiers, who were already aware of the uprising. The next day the rest of the insurgents were arrested in El Paso by immigration agents and Pinkerton detectives, but Magón managed to escape.

On 24 June 1908 the Partido Liberal Mexicano attacked Viesca, Coahuila, but were repelled and defeated. The leaders were apprehended and sent to the political prison of San Juan de Ulúa in Veracruz. Two days later, the liberals attacked Acuña, Casas Grandes and Palomas, again to no avail.

With a date of 26 June 1908 this bond could be an appeal for funds for the defence of Ricardo Flores Magón and Librado Rivera, both then imprisoned in Los Angeles, or Juan Sarabia, imprisoned in San Juan de Ulúa, Veracruz. 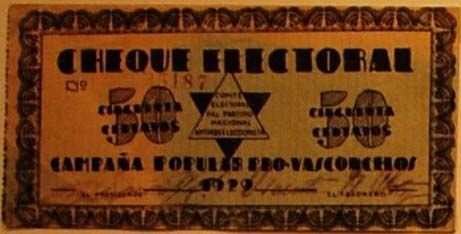 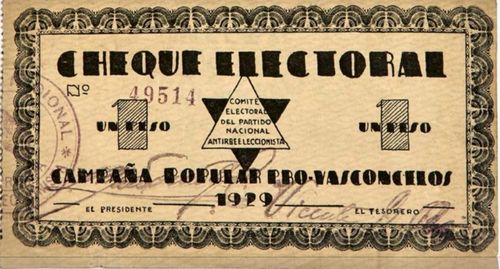 Adalberto Tejeda Olivares (28 March 1883 - 8 September 1960) rose to the rank of colonel during the revolution. While serving as a state delegate to the Constitutional Convention of 1916–1917, he advocated strong anticlerical measures and stringent limits on foreign ownership of subsoil rights. He was twice governor of Veracruz and championed the rights of the urban and rural lower classes by supporting their efforts to organize, strike, obtain land, and enter into politics. President Calles appointed him to serve as minister of government from 1925–1928, during which time he pursued an active anticlerical policy against the Catholic rebels, the Cristeros. In 1934 he ran for the presidency as an independent socialist, defying the official revolutionary party and gaining 16,037 votes against Lázaro Cárdenas' 2,225,000. He was subsequently politically ostracized by his assignment to diplomatic posts in France (1935–1937), Spain (1937–1939), and Peru. In 1948 he became a brigadier general.

Manuel Ávila Camacho (24 April 1897 – 13 October 1955) served General Lázaro Cárdenas as the Chief of his General Staff during the Mexican Revolution and afterwards. In 1929, he fought under General Cárdenas against the Escobar Rebellion, the last serious military rebellion of disgruntled revolutionary generals, and the same year, he achieved the rank of brigadier general. After his military service, Ávila Camacho entered the public arena in 1933 as the executive officer of the Secretariat of National Defence and became Secretary of National Defence in 1937. In 1940, he was elected president of Mexico. As president, he pursued "national policies of unity, adjustment, and moderation." His administration completed the transition from military to civilian leadership, ended confrontational anticlericalism, reversed the push for socialist education, and restored a working relationship with the US during World War II.

The Frente Constitucional Democrático Mexicano was organised by the deputy Bolívar Sierra and General Ramón F. Iturbe and composed of small landowners from the North and former Obregonista soldiers. It supported the candidature of the perennially opportunist and optimistic General Rafael Sánchez Tapia. 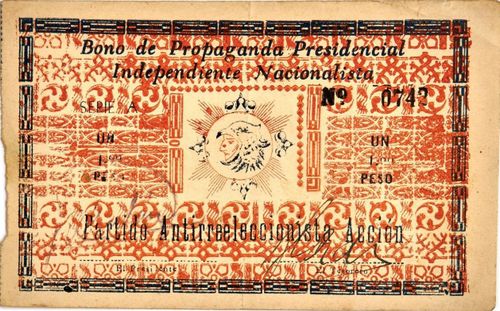 Ezequiel Padilla Peñaloza (31 December 1890 – 6 September 1971) served in the Senate, as Attorney General in 1928, as Secretary of Education from 1928 to 1930, as ambassador to Hungary from 1930 to 1932, and as Secretary of Foreign Affairs from 1940 to 1945 in Camacho's cabinet. With his co-cabinet member Miguel Alemán Valdés (Secretary of the Interior), he "gave Mexico the most progressive foreign policy and the most orderly internal government in the nation's history". By 1941, he had successfully settled all foreign claims against the government stemming from the Cárdenas-era expropriations. He negotiated a favorable economic treaty, fixed the peso to the United States dollar, and secured loans for industrial development from the Export-Import Bank of the United States.

He emerged alongside Alemán as a prime contender for the presidency in 1946. He was better-known abroad than his rival, and was considered to have stronger tendencies toward democracy. However, his association with the United States made him unpopular in the left wing of the Institutional Revolutionary Party (PRI), and Alemán won the party's nomination. Padilla ran as an independent candidate, receiving 443,537 votes. Though Alemán received over three times the number of votes, Padilla's total was respectable, considering the PRI's hegemony at the time.

This $100 bond is from Cuernavaca, Morelos 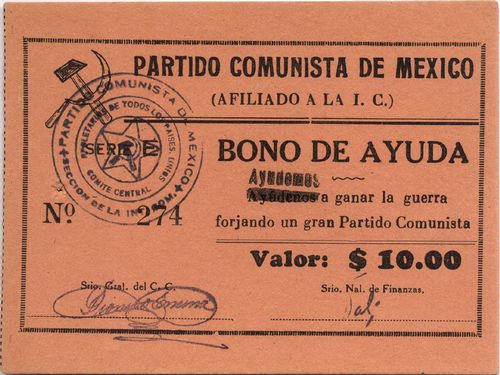