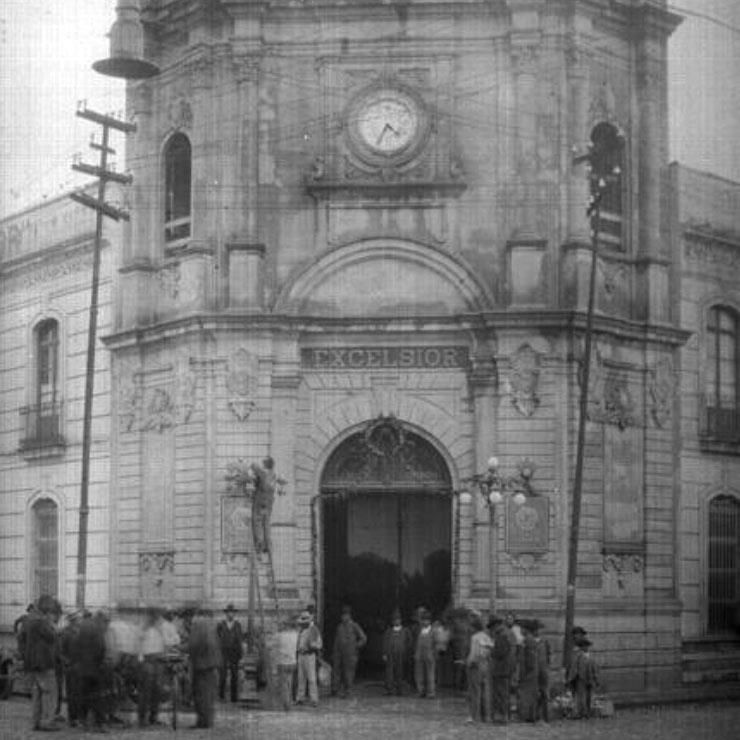 The Excelsior Shoe Factory (Fábrica de Calzado “Excelsior” y Anexas, S. A.) was founded in 1902 by Carlos B. Zetina.

Carlos Borromeo Zetina Mesa was born in San Andrés Chalchicomula, Puebla on 14 January 1864. After an apprenticeship in Puebla he founded the Excelsior factory in 1902. Juan Sánchez Azcona recalled that “The exceptional thing about this man was his altruism. A true socialist and friend and true defender of the proletariat, he protected his workers with paternal solicitude. Long before the current doctrines in our country, much less in the law, sanctioned the sharing in profits, Don Carlos B. Zetina established it spontaneously and quietly in his company. And not only that: he also established a school for the children of the workers and cheap and hygienic rooms for their families, when the law did not yet intend to require it.” In addition to having bathroom and laundry services, he built his workers a Casino (social club).

Zetina was an outstanding fighter for the Maderista cause, being so that at its triumph in 1911 he was elected a federal deputy. After Huerta’s coup he left the country, traveling through Europe and finally settling in Havana, Cuba, where he established another factory. Once Constitutionalism had triumphed he was elevated to a seat in the Senate, representing the state of Puebla. In January 1918 he was elected president of the city council of Mexico City, a position he soon resigned and returned to his private and labour activities, becoming the third president of CONCAMIN (the Confederation of Industrial Chambers of the United Mexican States). He was a presidential candidate in 1923.

Overwhelmed by labour problems in his company, he died on 6 August 1927 in Mexico City.

The factory was located on the corner of calles Porvenir and Ranchería (nowadays calles Benjamin Hill and Carlos B. Zetina) in the Tacubaya district of Mexico City. In 1907 a tannery annex was added and the entire plant covered an area somewhat larger than that occupied by two regular city blocks. The total number of operatives, including both sexes and children, was 450, turning out 2,000 pairs per day of all classes of shoes. At the same time as the company was growing, Zetina maintained a network of shoe stores in which he sold its products. 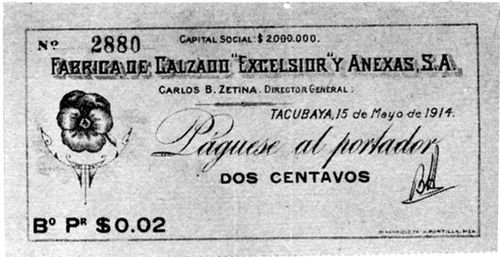 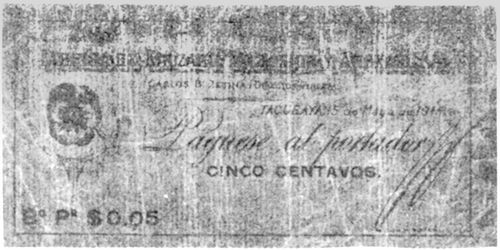 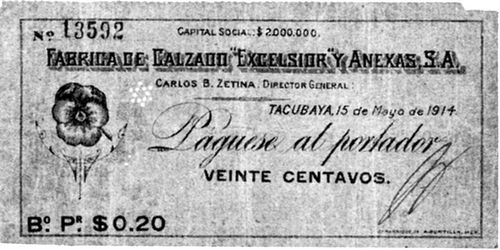 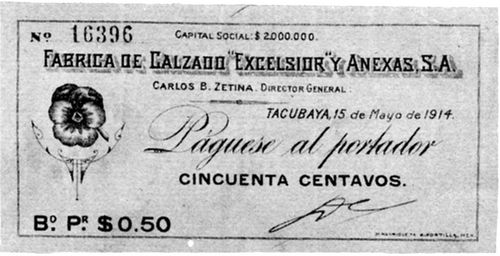 These were validated with their initials by at least four individuals.

These were printed by A. Portilla at 3a calle de Manique (today República de Cuba), 34.