On 27 December 1913 Pastor Rouaix told Carranza’s agent, Rafael Zubarán, in Hermosillo that his government had just issued paper money guarantied with future tax receipts which it reckoned it could do in the face of the normal costs of the war. However, the unexpected withdrawal from Torreón had made his government hesitate to take on responsibility for redeeming its notes without a guarantee. Zubarán replied that Carranza suggested Rouaix issue paper money which would be redeemed with a special law once order had been restored.

On 23 January 1914 Carranza, from Culiacán, authorised Rouaix to make a new issue of $1,000,000, not only for the costs of the state’s forces but also of the Constitutionalist forces operating in the neighbourhood of the state (perhaps an attempt to reconcile Rouaix’ and Arrieta’s needs)ADUR, Fondo Secretaria General de Gobierno (Siglo XX), Sección 6 Gobierno, Serie 6.7 Correspondencia, caja 7, nombre 12. On 25 January the local newspaper reported that Carranza had authorized Rouaix to issue up to a million pesos in bonos, which the national government would honour at the triumph of the revolution. The new bonos would soon be in circulationEl Demócrata, Segunda Época, Tomo II, Núm. 55, 25 January 1914: also El Demócrata, Segunda Época, Tomo II, Núm. 56, 28 January 1914. So, in the next issue, one value had a specific guarantee whilst the others had a more general, indefinite backing. These had the customary oblong shape, were dated January 1914 and had the signatures of Rouaix as Governor, Francisco Ríos Laurenzana as Secretary of State and del Real Alfaro as Director General de Rentas.

The $1 and $5 notes carried the magical formula that they were authorized by the Primer Jefe of the Ejército Constitucionalista (i.e. Carranza) and would be changed at par for the coins that the Constitutionalist Government would issue. 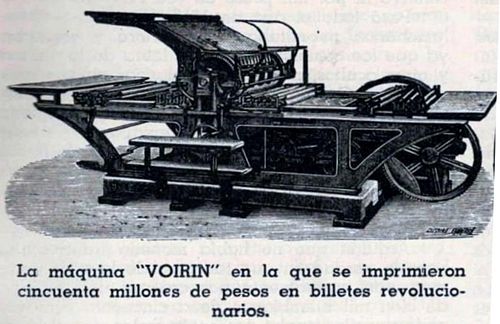 These seem to have been printed by Miguel Gómez as on 4 March 1914 the governor comissioned Centura Olvera to oversee the printing of bonos in the Litografía of Miguel GómezADUR, Libro Copiador 267, Hacienda 11 July 1913 - 25 April 1914, p840.

In response to a request by Pastor Rouaix, on 28 February 1914 Carranza, from his headquarters at Nogales, Sonora, made the issues that had been issued, with his approval, by the Constitutionalist governments in Sonora, Chihuahua, Sinaloa, Durango, Nuevo León and Tamaulipas forced circulation throughout the territory dominated by the Constitutionalist government. So this issue was legal currency in various states and is known revalidated by the Jefatura de Hacienda in Guadalajara, Jalisco.