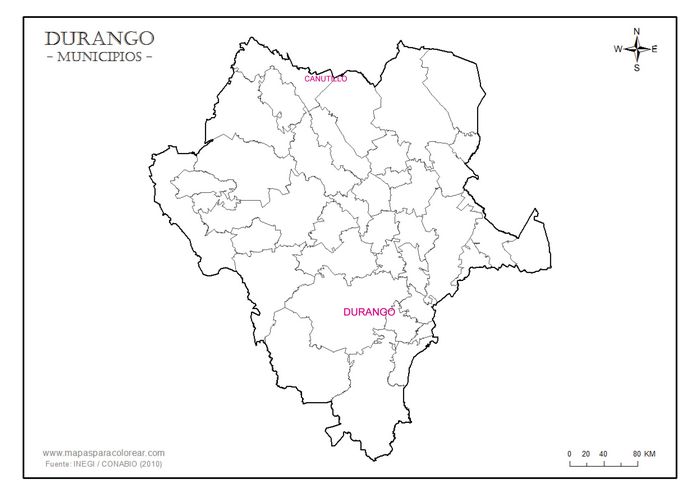 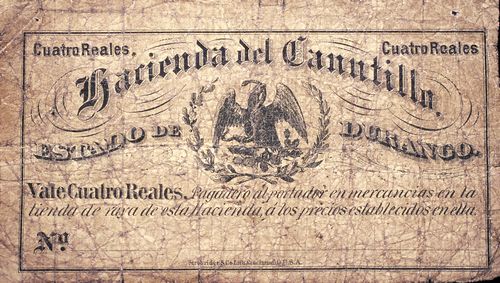 The only surviving note from a hacienda is this four reales notes from the Hacienda de Canutillo in the very north of the state. It is redeemable for merchandise from the hacienda’s tienda de raya.

The note was printed by Strobridge & Co. Lithographers, of Cincinnati, Ohio. This, one of America's most famous printing firms, was founded in 1847 by Elijah C. Middleton as a bookstore and stationery supplier, and was initially focused on steel and copperplate engraving. The firm eventually became world famous for its colourful, detailed, high quality designs, and by the turn of the century was the largest producer of circus, theatre, and magic posters in North America.

This hacienda was given to Francisco Villa by the government when he surrendered in July 1920. 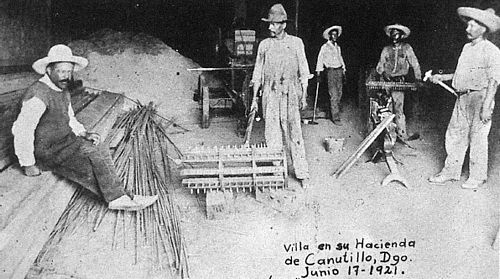 On 16 September 1908 it was reported that a group of a hundred (drunken) peones attacked the main buildings of the Nazareno hacienda, where only the owner, José Farjas, his wife and his book-keeper where in residenceLa Patria, Año XXXII, Segunda época, Núm, 138, 18 September 1908. One of the workers, José L. Puente, was killed.

The hacienda paid its workers with vouchers (vales ó fichas) that had to be exchanged for goods in the tienda de raya. Apparently, Puente had tried to cash half of the vales he held, was abused by Farjas, who was in a bad humour, taken inside the house and ultimately killed in an explosion. So the workers besiged the house until help could arrive from Ciudad LerdoLa Patria, Año XXXII, Segunda época, Núm, 162, 14 October 1908.

In November 1911 a newspaper reported on “the monopoly in the Hacienda de Nazareno”. Though the articled was datelined Avilés, Coahuila, it probably referred to the same hacienda as above, the one 15 kilometres south of Torreón. The newspaper reported that on the hacienda they paid part of the wages with fichas that could only be used in the tienda de rayaEl Diario del Hogar, Año XXXI, Núm. 11,014 Tomo 48, Núm. 71, 29 November 1911. 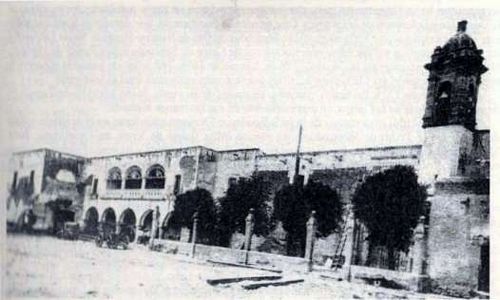 These Hacienda de Santa Lucia notes are catalogued as from Jalisco but there was another hacienda in Canatlán, which might be a more likely sourcean opinion based on the similarity with the Canutillo note above and my personal belief that, when we have single examples of issues, they were originally attached to report from local authorities to the state authorities and subsequently "liberated" from the archived reports.

We know of an issue of four values (½ real[image needed], 1 real, 2 reales and 4 reales) dated May 1888 and redeemable in goods from the company store (EN EFECTOS DE LA TIENDA DE ESTA HCDA).