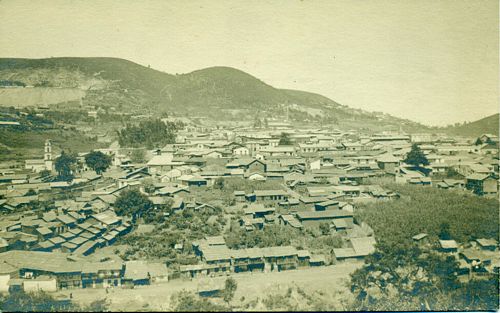 A description of El Oro informed the reader that "The little town of El Oro is 108 miles by rail northwest from the City of Mexico, and is reached by a narrow-gauge branch of the Mexican National railroad to Tultenango, from which station the El Oro Mining & Railway Co’s local railway bring the traveler to El Oro itself. The mine is thus placed with easy reach of a large city." The article also gives a very patronising description of working conditions and pay"On the whole, the native labour of the El Oro district is exceptionally good, but the population of the district is insufficient for the demand made by expanding mining operations, therefore workmen have been obtained from other districts, such as Pachuca and Zacatecas. It has also been found necessary to increase the wages of the peon, or day labourer, so that it is nearly double what it used to be ten years ago. Thus, in 1897 the rate was 37½ centavos, while in 1908 this same class of labour commanded 62½ to 75 centavos per shift. Furthermore, while the rate of wages has increased the amount of labour performed per individual has suffered a decrease ; in other words, the efficiency of ordinary labour has decreased to a serious extent. It is characteristic of the Mexican native that the more pay he receives the less work he will perform ; if he can earn sufficient for his needs by working three days per week, he does not see the philosophy of working for six days. Surplus earnings are chiefly devoted to the purchase of pulque and other intoxicants, as well as other luxuries not conducive to physical fitness. It is true that the cost of living has increased and this has operated in a measure as a counterirritant, so to speak, against a tendency toward idleness. Importations from elsewhere have not proved an unqualified success because the natives are reluctant to leave their tierra, or home place, and it is only the most venturesome, and the least responsible, that do so ; and the best of these are apt to drift back to the place of their origin as soon as they have accumulated a little money. Many devices were tried to attract labour to El Oro; one of these was to pay a bonus for continuous work. It was customary to pay once a week, namely on Sunday, with the result that if any money was left on hand by Monday morning, the workmen were disinclined to go to work; by paying every day, however, the native got his money gradually, instead of receiving a lump sum, and as he spent it in the manner in which he received it, he was more likely to be in a fit state for work when he received his pay daily. However, it was also found necessary to introduce some form of contract, or task work, payment being made on results, as measured by the metre or by the ton. At the Esperanza the contract system was elaborated so as to include practically all classes of labour, the idea being to diminish the proportion of men at day's pay so that the expense of superintendence could also be reduced to a minimum. For breaking ore the price varied from 6 to 12 pesos per square set, in oxidised ore, and from 10 to 20 pesos per square set in sulphide ore; drifts and cross-cuts cost 20 to 40 pesos per linear metre; raises, 25 to 40; winzes, 30 pesos and upward. For timbering, 1 peso was paid per post, or 5 to 15 pesos per set. For tramming, the price varied from 15 to 20 centavos per car when filling from chutes, but the price was raised to 25 centavos when it became necessary to shovel. The ordinary labourer in a mill was paid 75 centavos per 12 hours. These figures will give some idea of the range of prices. It is proper to say that Mexican labour is not cheap, but if properly handled it is fairly satisfactory. Owing to the natural improvidence of the native workman, he never saves enough to keep his family more than a week or so; this effectually prevents serious strikes. Moreover, strikes and similar outbreaks are quickly repressed by the officials of the Mexican Government, so that any agglomeration of individuals planning to make such a move to the detriment of industry has to reckon upon repression from the authorities. As a rule the natives can be taught to use modern methods and machinery, but it is a slow process, requiring both time and patience, especially if the act required is another way of doing something they have been accustomed to do in their own way; for example, great difficulty was found in enforcing a Mexican assayer to use a modern muffle furnace instead of the old ‘pot’ furnace, to which he had been accustomed; the stopping of the custom of ceasing work in the middle of the forenoon and eating almuerzo, or breakfast, required months; and accustoming the native machinists to the use of modern highspeed steel on lathe and planer was an arduous undertaking; in fact, the breaking up of any old custom by the introduction of innovations was always attended with great difficulty and met with persistent opposition." (W. E. Hindry, “The Esperanza Mine, El Oro, Mexico” in The Mining Magazine, Vol. I, No. 2, October 1909).

By January 1914 all the El Oro companies were already using scrip. Permission from the Government to issue this paper was requested by the companies but was refused because of the federal law against such issues. However, they were verbally advised that in case such issues were made, nothing would be done towards their prosecution. However, the Minister of Hacienda also stated that if arrangements could be made to make paper money issued by the mining companies legal, a great obstacle would be that each vale would have to carry four centavos in revenue stamps. On vales of five centavos, therefore, 80% would be charged in stampsAHMM, Fondo Norteamericano, vol. 41, exp. 15, Dirección General, Correspondencia, Mar 1913 – Nov 1914 Weekly gossip letter 26 January 1914. 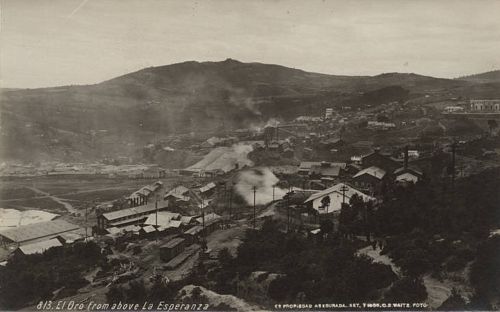 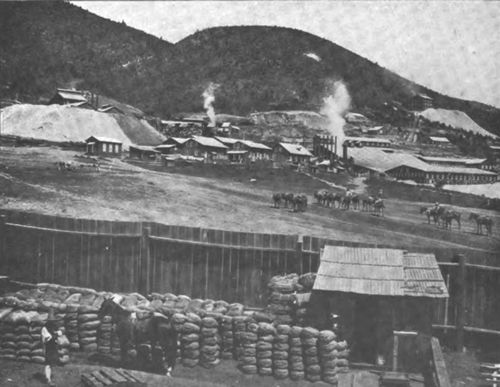 The Esperanza mine was originally "denounced" or located in 1890 by August Sahlberg, a Norwegian, who had been foreman, and later, superintendent of the El Oro mine, which adjoins the Esperanza on the south. At the time when he was superintendent of the El Oro mine the San Rafael vein was the principal lode and Sahlberg thought that the vein continued in the direction of the Esperanza. However, to get working capital he had to surrender the larger part of his interest but was allowed to remain in charge of the mine itself. In 1895 he increased the holdings of the company and changed the name to Compañía Minera La Esperanza y Anexas, S.A., with a capitalization of $300,000. The mine began to pay dividends, and, with his dividends Sahlberg commenced to buy back the shares that he had hypothecated, until he became one of the chief owners. In 1903, John Hays Hammond secured an option on the property for the Guggenheim Exploration Company and after a thorough examination the mine was bought by the Guggenheims for $4,500,000. The new company was called the Esperanza Mining Company of New York; the majority of the stock was placed on the London market and a subsidiary English company was formed under the name of Esperanza Limited. In 1906 the Esperanza mine became the most productive gold mine in the world, but production then tailed off. 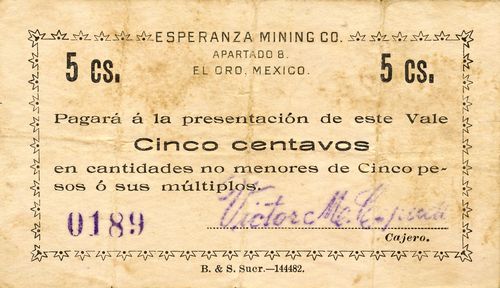 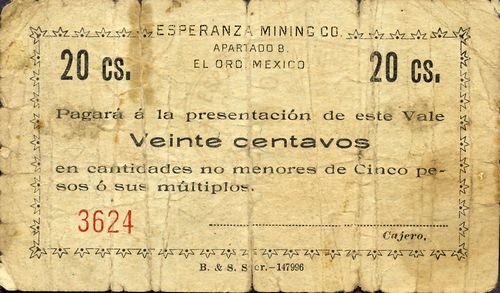 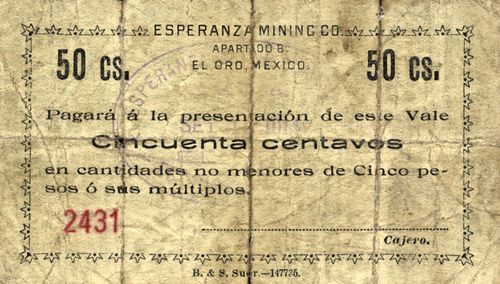 The stamped signature is of the cajero, Victor Mc[          ][identification needed].

The El Oro Mining and Railway company ordered a considerable amount in vales from Bouligny & Schmidt, Sucs., of Mexico City. On 13 January 1914 the Mexican Herald reported that "The scarcity of fractional coinage has necessitated the El Oro Mining company and the El Oro Mining and Railway company in El Oro, Mexico, issuing vales of five, ten, twenty-five, and fifty cents and of one peso, to meet the requirements of their weekly pay-rolls. These vales are exchanged when required at the office of the companies, the local bank of the state bank of Mexico, and are accepted at their face value in all commercial houses in making purchases. This action of the companies is appreciated by the employees"The Mexican Herald, 13 January 1914. In early February it was reported that they would probably be put into circulation in the immediate futureThe Mexican Herald, 9 February 1914. 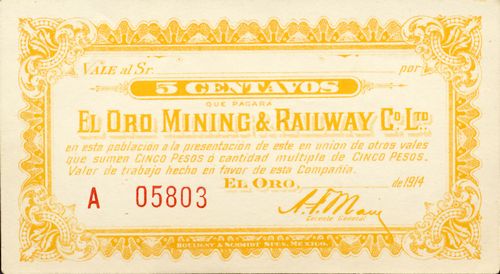 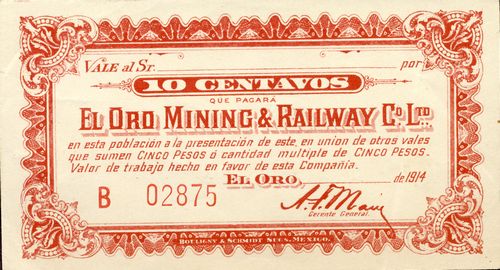 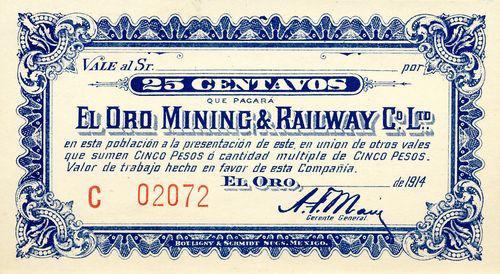 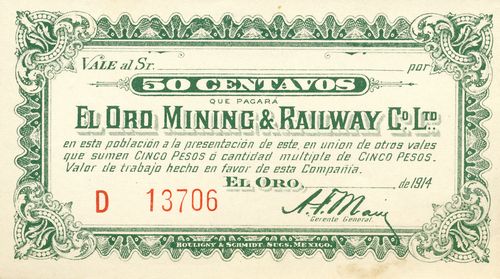 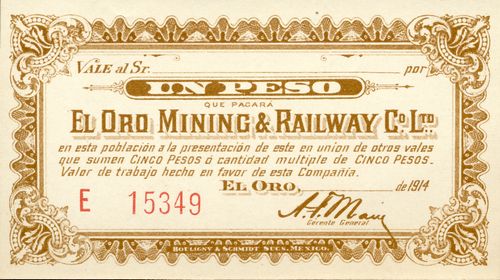 These were vales made out to a named recipient, as payment for work done (Valor de trabajo hecho en favor de esta Compañía) which the company would redeem in multiples of five pesos. They carry the printed signature of Alfred F. Main, who also signed a similar issue for the Compañía de Minas la Blanca y Anexas in Pachuca, Hidalgo.

A 1909 report stated "This company is an offshoot of the El Oro and is under the control of the Exploration Company. The management is in the same hands as the El Oro, A. F. Main being general manager and R. M. Raymond local director. Fergus Allan is mine superintendent. The mine is situated immediately north of the Esperanza, which in its turn is north of the El Oro".

The Mexican Mines of El Oro Limited issued an identical series of vales, presumably at the same time. 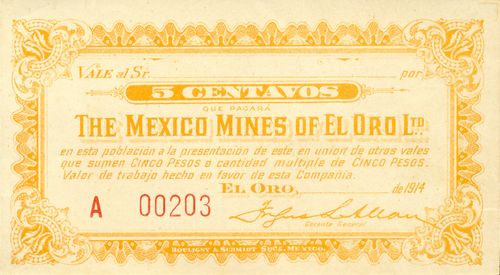 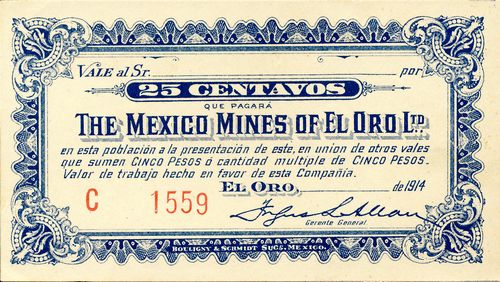 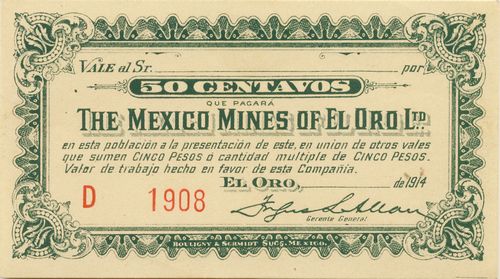 Presumably a 10c, so

By March El Oro and Pachuca, in the state of Hidalgo, were the only places where vales were being usedAHMM, Fondo Norteamericano, vol. 41, exp. 15, Dirección General, Correspondencia, Mar 1913 – Nov 1914 Weekly gossip letter 23 March 1914.

This set of notes dated 1 November 1914 are entitled “PENDIENTE DE CAMBIO” and were drawn on one merchant and asked another merchant to entrust the holder its value in merchandise. With four issuers, to three other payees, and at least five valuesDick Long, in his November 1974 auction, had a 10c note[image needed], listed as Hilario Carrillo but that would have been as payee, there could have been up to sixty permuations.  They could be redeemed in multiples of ten pesos.

The four casas comerciales that issued and would accept the notes were:

We know of a 4c note addressed to Agustín Garza. The signature is scarcely legible, but this should be from Carrillo by process of elimination. 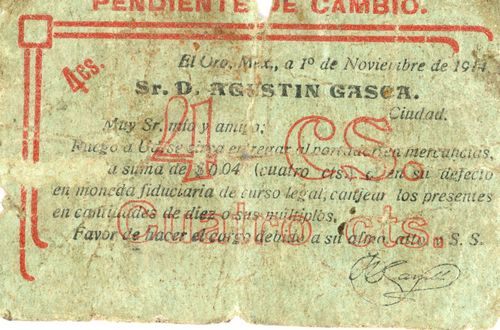 We know of 1c notes addressed to Hilario Carrillo 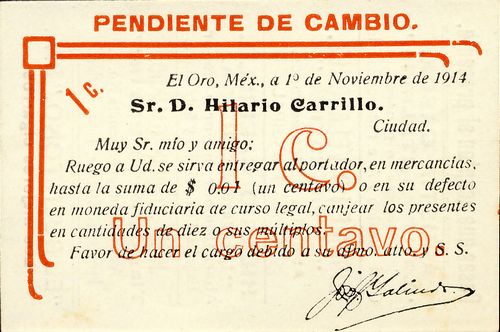 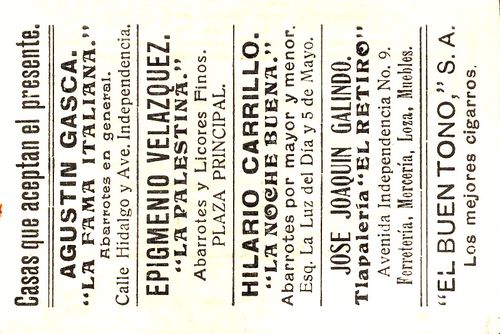 and of 1c and 3c notes addressed to Agustín Casca 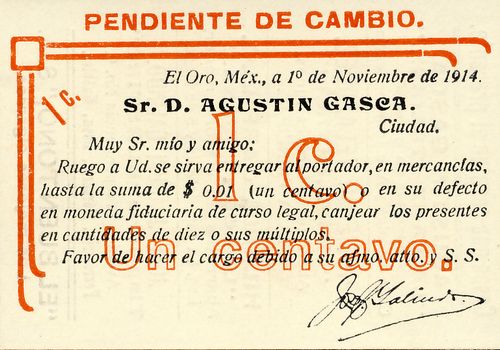 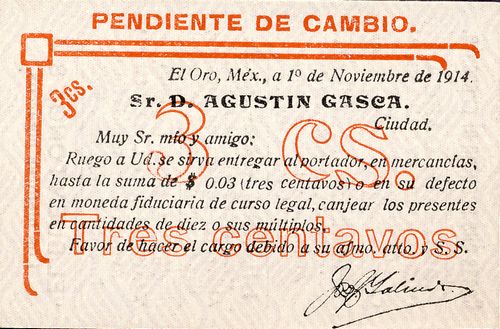 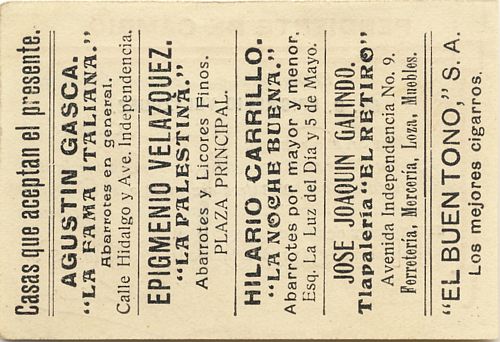 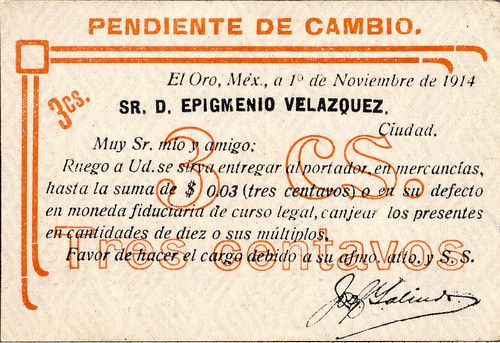 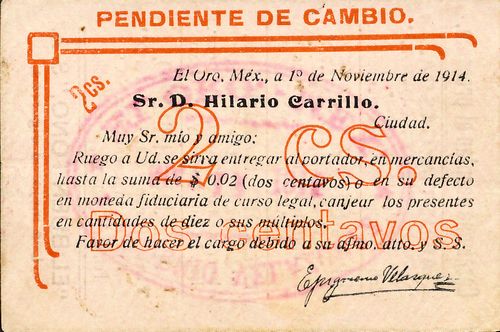 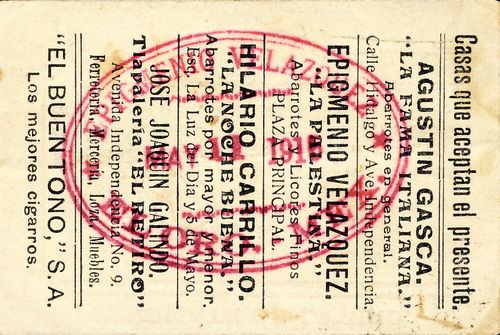 Another series of notes (1c, 2c, 5c and 10c) issued by A. López of El Vesubio asked Hilario Carrillo's La Noche Buena to give the holder its value in merchandise or currency and to charge El Vesubio’s account. 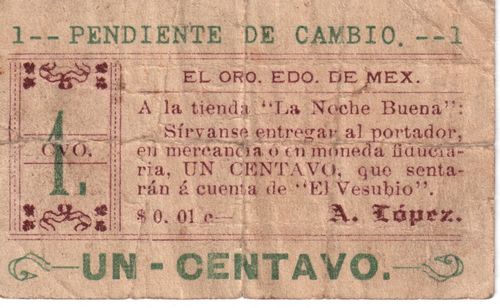 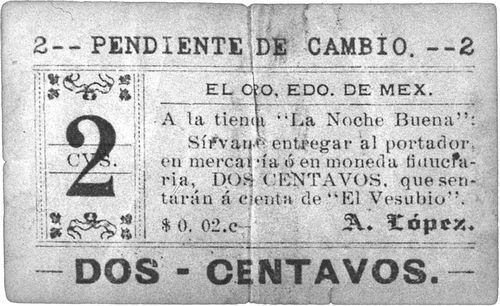 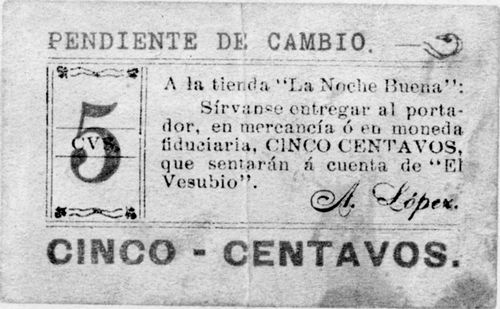 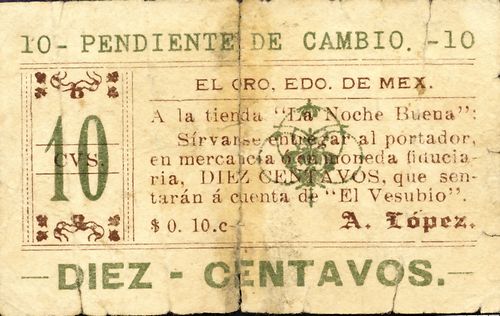 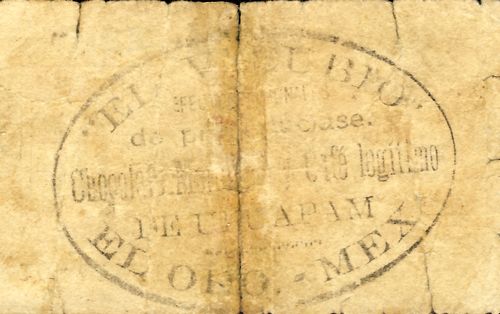 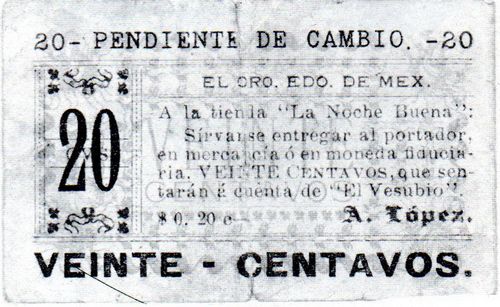 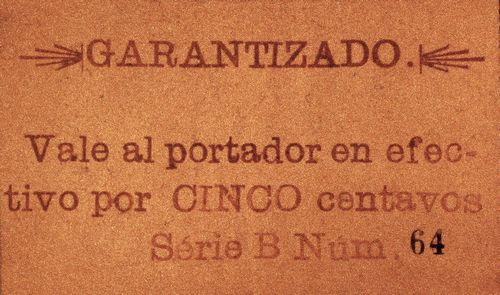