These ½ real notes were produced in San Miguel El Grande (today San Miguel de Allende) in 1813 as a response to the shortage of coins,

On 18 July 1813 the Subdelegate, Miguel María Malo wrote to the Intendant of Guanajuato, Fernando Pérez Marañon, about the extreme lack of the circulating currency and the avarice of merchants who would only exchange a peso when four or five reales were spent, thus hurting everone. particularly the poor. This state of affairs had moved Church dignitaries, regular mayors, the Public Prosecutor and the Governor to remedy it before the people got out of hand. So on 14 July Malo called a general meeting of the local assembly, where it was decided to designate a council to offer a remedy and this council, in turn, decided to manufacture some paper scripts “to circulate in lieu of the coinage with a value of ½ Real under the strict supervision of the judges and subject to all the penalties considered in our wise legislation for its counterfeiters”.

Even if the individual who presents himself as the Subdelegate of San Miguel el Grande had indeed obtained the aforementioned authorization reported by the Intendancy of Guanajuato in a non-malicious way, it would still represent a reprehensible and reckless attitude by arrogating himself excessive faculties to authorise the manufacture and circulation of the paper money issue. This same medium (i.e. the issue of paper money) was proposed under the direst circumstances by the Intendancy and Council of Merida de Yucatan, yet it was still denied by this authority, and in the end other more viable measures such as the forced loan of the silverware and the additional taxes on the properties were taken. These measures were most prudent since they prevented all the harms and inconveniencies that have always resulted from the use of paper money. In addition, it should be noted that the aforementioned issue put into circulation by the Subdelegate of San Miguel el Grande is entirely despicable and it can only be redeemed and guaranteed by himself personally and the Junta which he claims to have consulted: indeed, the Public Exchequer should never be forced to receive these unauthorized notes nor the people who have received it in good faith since considering them to be legitimately approved since authorized by the resident Judge in that locale.

It should also not come as a surprise that this media allows for the deceiving of the people with only a few individuals hoarding the limited coinage that is found in circulation. This suspicion should be all the more present considering the recklessness shown by the Subdelegate, which probably emanates from some personal interest in the matter. Indeed, even the most extreme ignorance could not have bestowed upon him such ample and extraordinary faculties nor explain the laconism and lack of information that emanates from his note in which he informs the Intendancy of Guanajuato about the matter: the latter does not specify the amounts of notes that have been printed nor the warranty to back up their value nor all the other details and circumstances that such a serious measure usually implies.

By virtue of the arguments I have expressed, Your Excellancy should disapprove the measure of the Subdelegate of San Miguel el Grande in its entirety, and instruct the Intendancy of Guanajuato to take the measures they deem convenient to question said Subdelegate, learn about the true origin of this most extreme procedure, recall the notes and reimburse their holders with the value that has been attributed to them and other necessary measures to obtain thorough antecedents of the issue in general. 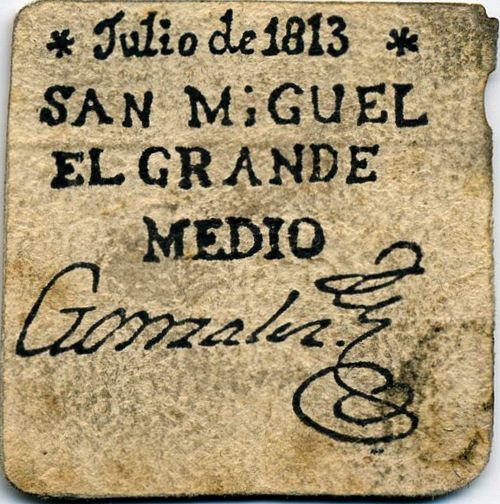 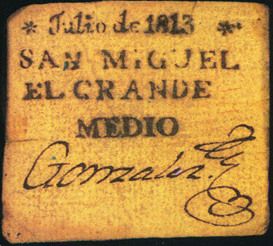 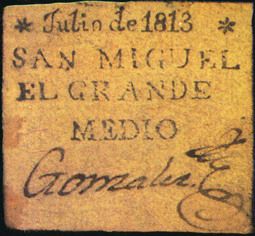 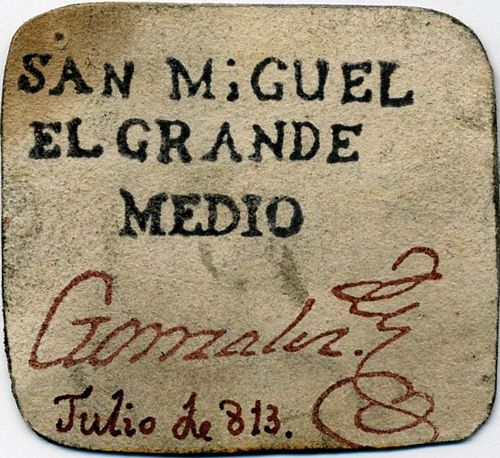 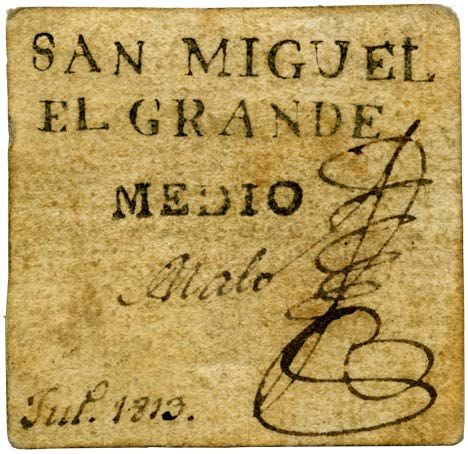 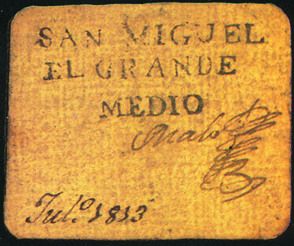 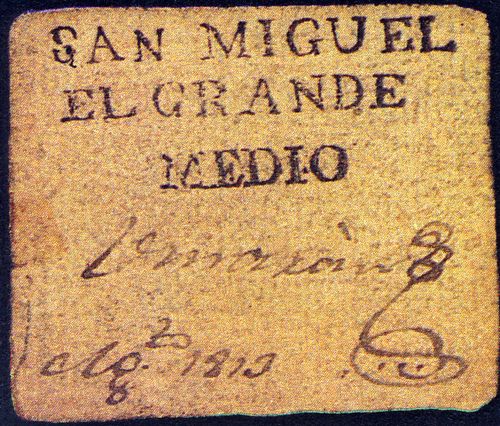 The notes are dated to July or August 1813 and have (at least) three different signatories.

The extreme rarity of these notes is obviously due to the great zeal with which the recall and destruction of the notes was performed, following Calleja’s clear instructions.