Ramón Alcázar was from a family of Guanajuato businessmen. In 1876 he teamed up with Guillermo Stallforth, a German from Bremen, to establish Stallforth, Alcázar & Compañía. Its principle activity, in the beginning, was mining machinery, though later it branched out as commission merchants and bankers.

Alcazar invested in the Banco Mercantil Mexicano in 1881, with $10,000 in the name of Stallforth, Alcázar y Compañía and $8,000 on his own account. He also held shares in the  Banco Nacional Mexicano and was president of its Guanajuato branch in 1882. He helped found the Banco de San Luis Potosí in 1889, which set up branches in León and Celaya, and the Banco de Jalisco in 1898. In 1899 he was one of the concessionaires for the Banco Central Mexicano, in Mexico City, and was one of the founding shareholders of the Banco de Guanajuato in 1900He took 50 shares of $100, Stallforth, Alcázar y Compañía 174 and his son, Ramón Alcázar Ibargüengoitia, another 50. 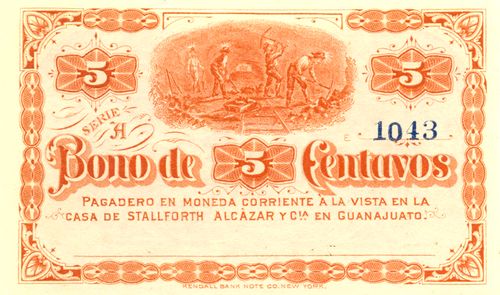 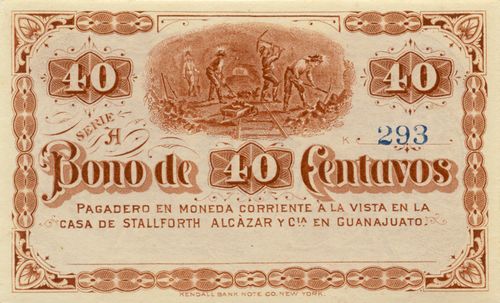 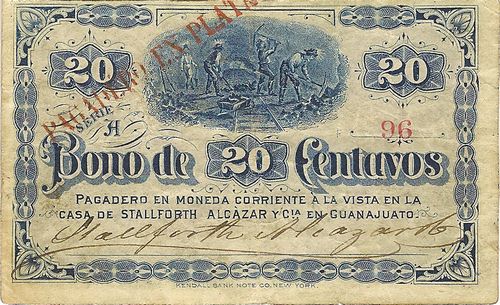 The Mexican government passed its Código de Comercio on 15 April 1884. Chapter XII referred to “Los Bancos” and articles 954 to 955 stated that in future federal authorisation would be needed to establish any bank (bancos de emisión, circulación, descuento, depósitos, hipotecarios, agrícolas, de minería o con cualquier otro objeto de comercio). Articles 957 and 958 laid down that they would have to be limited companies (sociedades anónimas) with at least five founder members, and a minimum share capital of $500,000, with at least half fully paid up. Only banks conforming to the law could issue notes payable to the bearer on sight: note issue could not exceed paid-in capital: fixed cash reserves were required, and all banknotes other than those of the Banco Nacional de México were taxed at 5% of their value. A final article stated that existing banks could not continue operating unless they subjected themselves to the Act within six months.

On 8 August 1884 the Banco Nacional de México complained to the Secretaría de Hacienda that Stallforth, Alcázar and Co. of Guanajuato had issued and circulated fiduciary documents which at all glance were banknotes. According to the information available to the Board of Directors, these gentlemen obtained a permit from the Executive to issue those notes on the terms of the current Código de Comercio. However, Article 979 of the same code decreed: "No individual or company that is not authorised to do so in the terms of this Code or of a federal law, may issue vouchers, promissory notes or any other documents containing a promise of payment in cash, bearer, or on sight, either in the form of banknotes, deposit receipts or any other. Documents thus issued or subscribed shall not be actionable and enforceable before the courts, and the person who signs them shall pay a fine. of 10% of the value they express". In this legal context, the legal representatives of the Banco Nacional de México requested the direct intervention of the national governmentAHBanamex, Banco Nacional Mexicano, correspondencia, 4 August 1884. As soon as the period specified in the Código for withdrawing unauthorised issues had passed, the Jefe de Hacienda in Guanajuato was ordered to investigate. As a result of its investigation the Jefe de Hacienda reported, on 21 March 1885, that the notes had been withdrawn in timeMemoria de la Secretaría de Hacienda, 1884 - 1885, México, 1885. So the notes’ circulation was limited to the period from [           ] 1883 to September 1884.

In the first decade of the twentieth century Stallforth, Alcázar y Compañía ran into financial difficulties and Stallforth lost money. This might have provoked his suicide on 2 December 1907, when he drowned himself in the Presa de la Olla on one of his trips to Guanajuato. By 1910 the company was in liquidation.

However, on 1 August 1915Crispín Espinosa, Efemérides Guanajuatenses, 1917 the Administración General de Rentas del Estado used the unissued remainders for an issue to counter the shortage of small change. It overprinted the legend so that they were now payable in the Tesorería General and added the phrase ‘of obligatory acceptance in the State of Guanajuato (DE CIRCULACION OBLIGATORIA EN EL ESTADO DE GUANAJUATO)’ on the reverse. 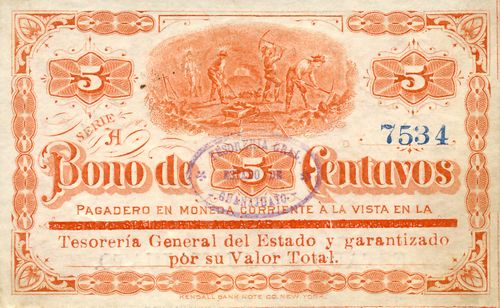 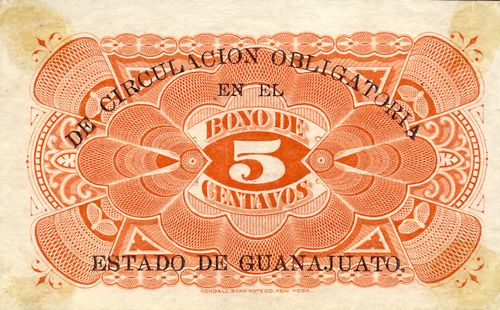 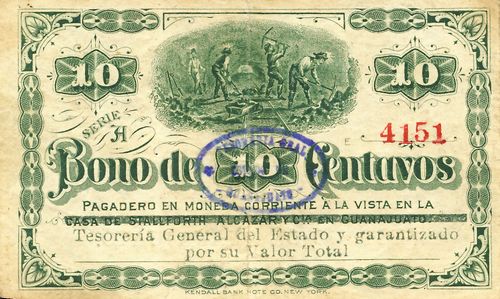 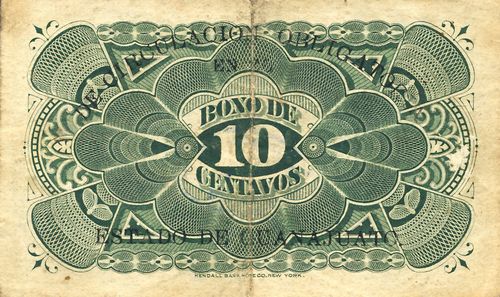 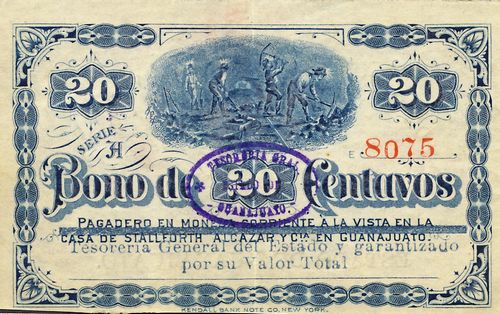 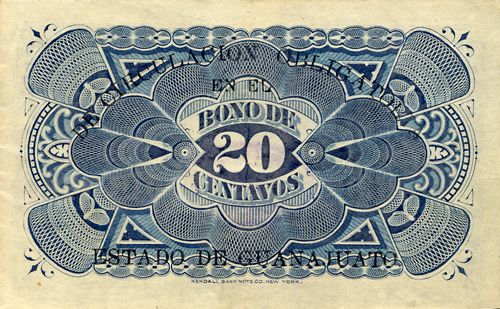 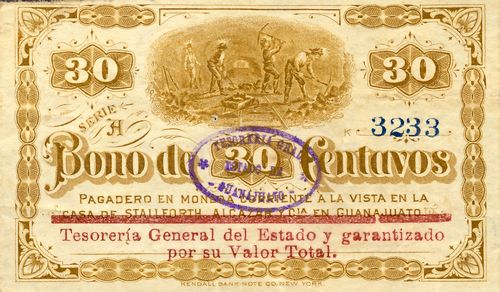 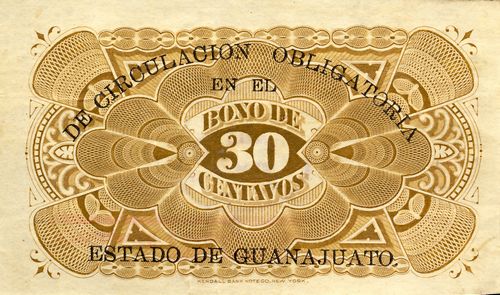 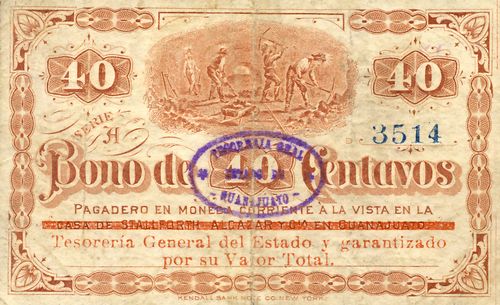 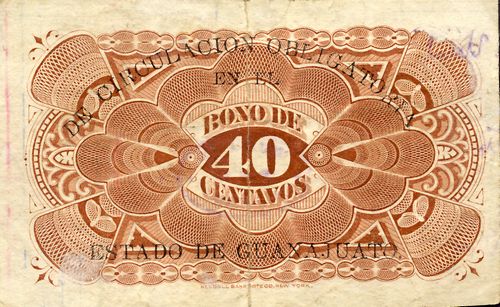 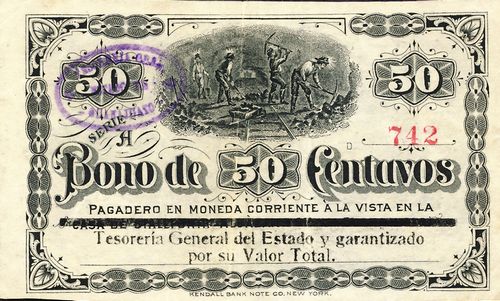 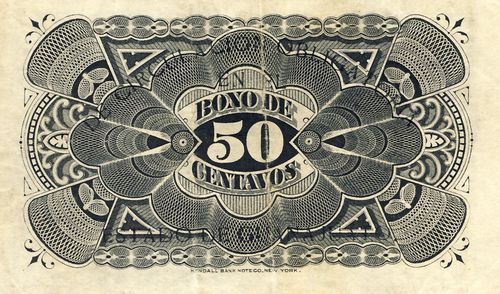