The Regimiento Antonio Reyes of the Brigada Azuara had a double connection with the district of Huejutla. Antonio Reyes Cabrera (“El Tordo”) had defended his home town against the French invaders, whilst General Antonio Azuara Sarmiento came from Motoltepec in the district. He took up arms against Huerta in Huejutla in April 1913 and, once dislodged, fought in the Constitutionalist cause and rose to General Brigadier. Azuara supported Carranza in his break with the Convention, and fought, under Pablo González, against Villa in 1915. In August 1915 he recovered Tulancingo. He was later governor of his home state.

There were three different series.

(1) a 50c and $1 note dated Huejutla, 12 January 1915. These are signed by Pedro E. López as E. M. J. D. E. M. (El Mayor Jefe de Estado Mayor) and L. Vargas as Cajero, and have the seal of the EJERCITO CONSTITUCIONALISTA - REGIMIENTO ANTONIO REYES on the reverse. 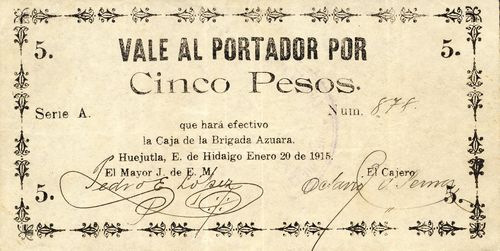 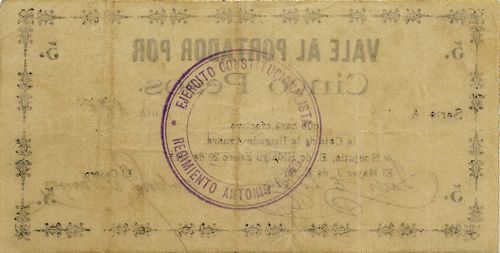 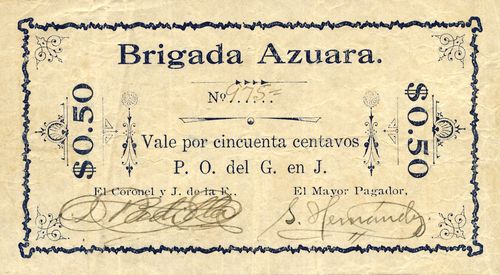 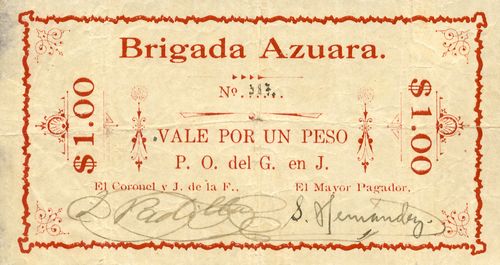 Thus, the signatories are: