The concession for a bank of issue in Hidalgo was granted to Maquivar y Compañía, Carlos Francisco de Landero, Manuel Araoz and J. Octavio Fernández on 28 February 1902. The Banco de Hidalgo opened for business on 1 November 1902 with a capital of 500,000 pesos. 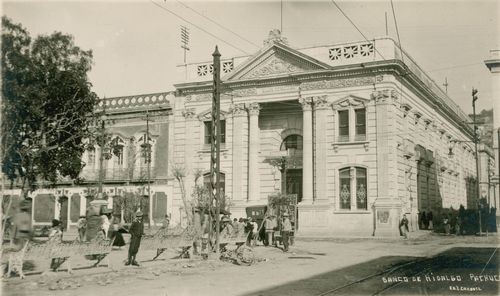 The bank’s main offices, on the corner of calle Plaza Independencia and calle Nicolás Bravo, were designed in a neoclassical style by the architect Ernesto Fuchs and constructed in 1905.

The bank established a branch in Tulancingo on 15 December 1906 with Javier Gómez as gerenteFidel Gómez was contador and Miguel F. Pérez was cajero. Martín García was president of the Junta Local, Gorgonio de la Concha segundo vocal, and Gabriel San Vicente tercer vocal.

The Comisión Reguladora declared the bank's concession forfeited on 16 November 1915.

Under Obregón decree of 31 January 1921 the bank was placed into Class B (for banks whose assets and liabilities were about equal and which were given a short time in which to obtain the necessary funds to resume) and allowed to resume all customary operations except the issue of bank notes.

The American Bank Note Company produced the following notes. The company engraved the following special vignettes: Juan C. Doria, first governor of Hidalgo (C253)Juan C. Doria was born in Real de Borbón (present - day Villagran), Tamaulipas. At the age of nine he was sent to Linares, Nuevo León, to study. He specialized in philosophy, and later, he studied law in Monterrey and Mexico City. He graduated as a lawyer during the days of the French intervention. He was appointed secretary to the Governor of Nuevo León. In 1865, as political and military chieftain of Linares, he formed a cavalry group and joined forces with Mariano Escobedo. He and Hipolito Charles formed the “Cuerpo de Cazadores de Galeana” (Galeana’ Hunters). When Escobedo occupied Monterrey and became State governor, he served as his secretary. He accompanied him in the siege of Querétaro where he fought heroically. When the Republic triumphed, he occupied an important post in the Department of War. Later, he was appointed Governor of the State of Hidalgo. for the $10 and $100 notes, Pedro Romero de TerrenosPedro Romero de Terreros was born in Cortegana, Spain, on 28 June 1710. Several members of his extended family had previously emigrated to the New World and operated successful businesses there, and about 1730, Romero de Terreros journeyed to Mexico and joined his uncle in Querétaro. Romero de Terreros showed an affinity for making money and soon brought his uncle’s businesses back into profitability. In 1741, he began to invest in the Pachuca-Mineral del Monte silver mines, along with his business partner Jose Alejandro Bustamante.
As his personal wealth rose, so did his social status. He served as alcalde of Querétaro, and in 1752 was given an honorary knighthood in the Order of Calatrava. He lobbied very hard to be elevated to the nobility and in 1768 was named the first Count of Regla (Conde de Santa María de Regla).
In the 1740s Romero de Terreros became a patron of the Franciscan order in Mexico. From 1745 through to 1781 he gave 41,933 pesos to the Franciscan seminary College of San Fernando de México and another 91,023 pesos to the seminary College of Santa Cruz de Querétaro, as well as 100,000 pesos for the monastery in Pachuca. He also funded missionaries in Spanish Texas, though his mission was destroyed by Indians. Besides his support for the Catholic Church in Mexico, Romero de Terreros also gave funds to civil authorities and funded a battleship for the Spanish navy.
Between 1774 and 1777, he established the Monte de Piedad, a charitable institution and pawnshop, as an attempt to provide interest-free or low-interest loans to the poor. for the $50, the monument to Hidalgo (C 845) for the $5, $20 and $100, and a view of Pachuca (C 839) for all the backs. 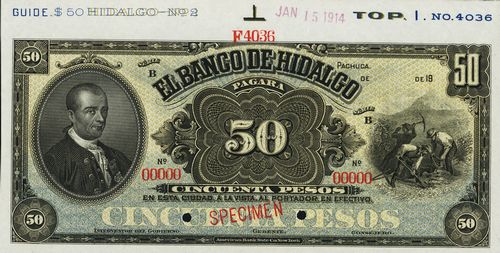 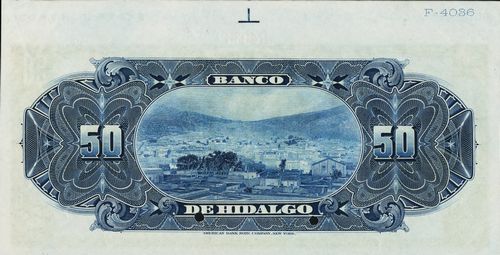 On 1 June 1902 it was reported that the notes were being lithographed by the New York Bank Note company (sic) and would be ready for delivery in Pachuca within two months, so that the bank would be prepared to commence business by 1 AugustThe Mexican Herald, vol. XV, no. 27, 1 June 1902.

Following Huerta's modification to the Ley general de Instituciones de Crêdito to allow the issue of $1 and $2 notes the bank ordered a $1 note from the American Bank Note Company.