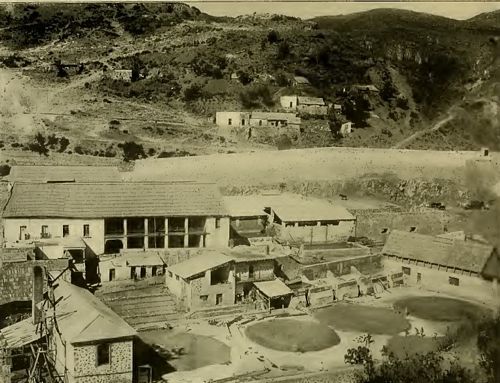 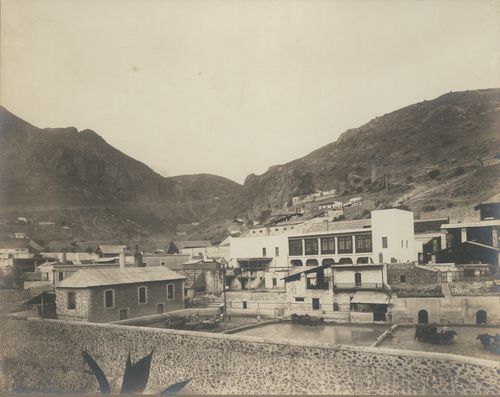 On 24 January 1914 some of the principal merchants of Pachuca called upon the mining companies and asked them to issue script as had been done elsewhere. They explained that their sales had been cut very heavily through lack of change and that they would not only welcome mining companies’ paper but would help in any way we could suggest. All the mining companies had been experiencing great difficulties in obtaining change for payrolls, so a meeting of the eight principal companies decided, having obtained the governor’s approval, to issue a series of notes in a common format. La Negociación Minera Hacienda Grande, Purísima y Minas de Guadalupe y Anexas undertook to issue $2,000 in the first trancheAHMM, Fondo Norteamericano, vol. 41, exp. 15, Dirección General, Correspondencia, Mar 1913 – Nov 1914.

These notes were printed by the American Book and Printing Company, of Mexico City. The company had had little experience with this type of work and was under time pressure, working twenty four hours a day to complete the ordersThe Mexican Herald, 9 February 1914, and the result were disappointing.

They had the printed signature of Luis García Granados and were signed by Manuel Ordóñez as Administrador.

The notes of the first issue were probably withdrawn, or lost acceptability, when counterfeits appeared of some notes. This is probably the reason for a couple of low value notes (5c, 10c and 20c), produced by Bouligny & Schmidt, of Mexico City, dated 10 July 1914. Known notes are datestamped September and November 1914 on the reverse. 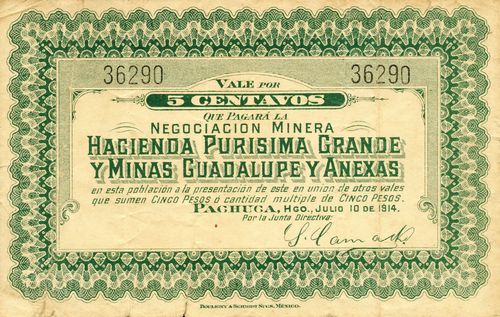 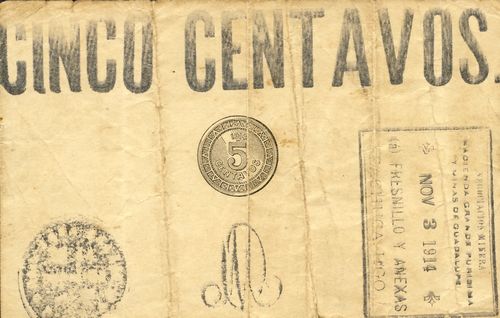 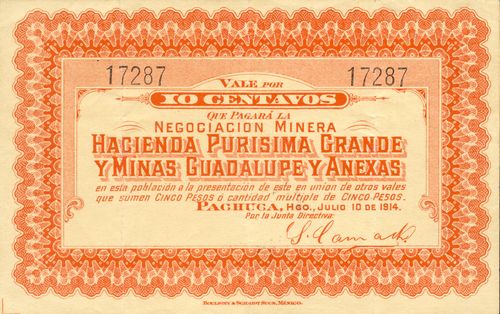 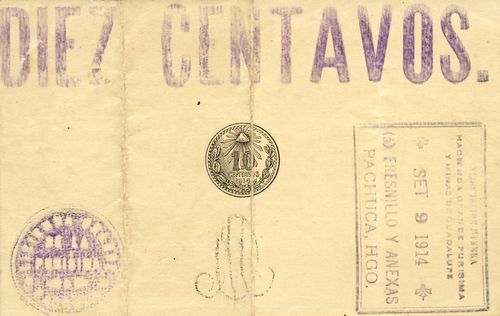 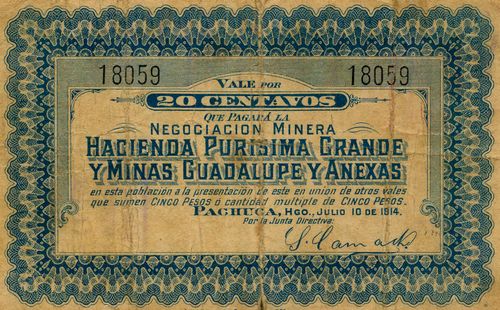 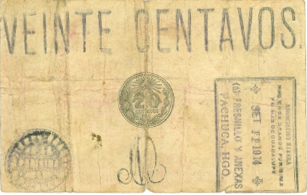 These were based on issues that Bouligny & Schmidt had already produced for the El Oro Mining & Railway Co. and The Mexican Mines of El Oro Limited, in the adjoining Estado de México. They were signed by S. Camacho for the board (Junta Directiva) and redeemable in multiples of five pesos (en esta población a la presentación de este en union de otros vales que sumen CINCO PESOS ó cantidad multiple de CINCO PESOS ).

These were produced by the local printers, Tipografía El Buen Tono, of Pachuca. They were signed by Luis García Granados as Cajero and Eligio Ramírez or Manuel Ordóñez as Director y Administrador.