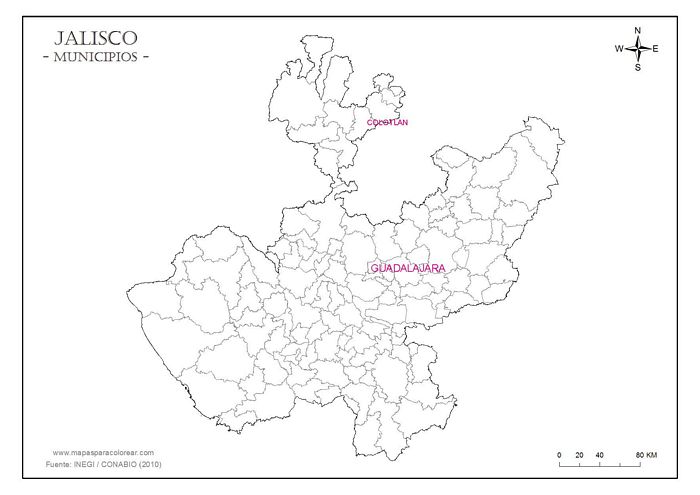 Colotlán is situated in the northern part of the state.

From May 1913 to March 1914, this region was almost totally dominated by Villista forces. In response to appeals from certain sectors of the population, the Governor sent General del Toro with a strong column of soldiers to the region. Ten days after arriving in Colotlán, the Villistas commanded by General Pánfilo Natera and the Bañuelos, with an army of more than three thousand men, besieged the town on 6 April 1914. General del Toro managed to flee, but left his loyal soldiers who perished: the people of the town dedicated themselves to looting and burning buildings, commercial houses and homes, particularly in the centre of the city.

These notes come from a later period. 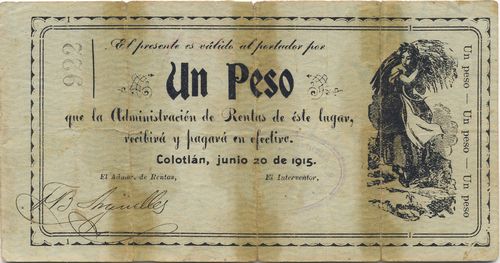 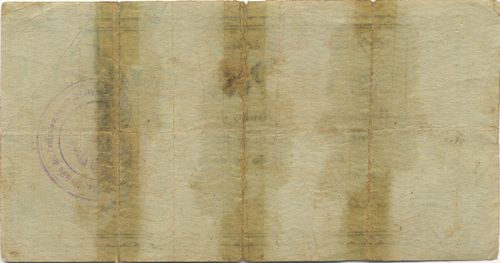 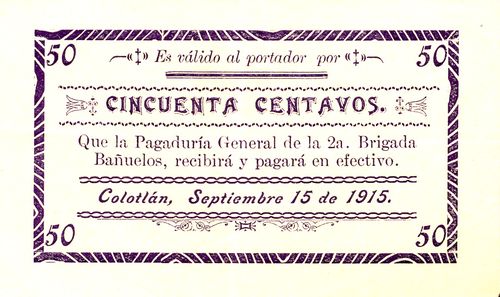 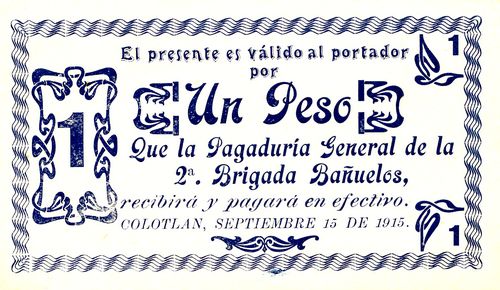 J Félix Bañuelos Bañuelos joined the armed struggle against Porfirio Díaz at the end of 1910. As a second lieutenant he fought in Zacatecas, Durango and Jalisco and with Maderos’ victory joined the 26º Cuerpo de Rurales He fought with the Constitutionalist forces between 1913 and 1917, participating in the forces of Pánfilo Natera and present at siege of Colotlán, Jeréz and Zacatecas. Some sources indicate that he was a Villista until 1920, leading the battles of El Ébano, San Luis Potosí, against General Jacinto B. Treviño. He adhered to the Plan de Agua Prieta in 1920. He was head of the garrison at Celaya, Guanajuato, from that year until 1923, when he became a Brigadier General. Between 1924 and 1936 he held several military appointments. In 1936 he was elected governor of the state of Zacatecas and was later governor of the territory of Quintana Roo. In 1946 he was a founder and director of the Military Academy of Mexico. He retired in 1944 and died in Mexico City on 2 September 1948 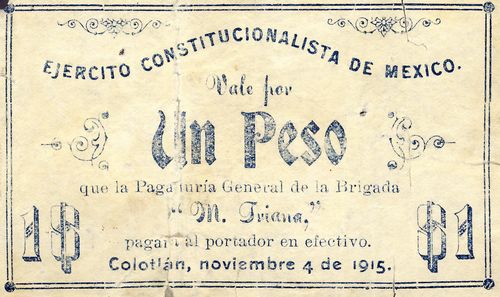 Martín Triana Guzmán was born in San Miguel del Mezquital (now Miguel Auza), Zacatecas, in 1885. In 1911, he joined the armed movement against Porfirio Díaz, fighting in the Lagunera region and occupying Sombrerete in May 1911. After the decena trágica, he again took up arms against Huerta and fought at Torreón and Zacatecas, taking part in the capture of that city in June 1914. When Villa fought with Obregón at Celaya in May and June 1915, Triana defected to the Carrancistas and was provisional governor of Aguascalientes from 10 August 1915 to 13 June 1916. In 1917 he retired to private life and died in Mexico City on 9 February 1934.