His first two decrees were issued from San Marcos, before Obregón captured the state capital, Guadalajara, on 8 July 1914. Decree núm. 1, on 18 June, made only the Constitutionalist issues of Carranza, Obregón  and any issue that Diéguez as state governor was going to make of obligatory acceptance throughout the state. Because of the complete lack of small change, decree núm. 2, on the same date, authorized an issue of $100,000, composed of

These were to be for local use, and would be exchangeable in the Tesorería del Estado for Constitutionalist notes. 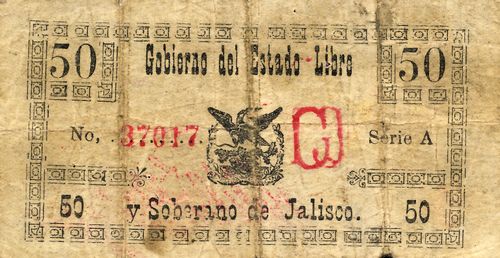 Diéguez immediately produced some provisional notes whilst still at San Marcos, for simple 50 centavos notes are known. These refer to decree núm. 2 as “today” and have the printed names of Diéguez as governor, Manuel Aguirre Berlanga as secretary, and the hand signature of Helio Garza(?) as interim treasurer.

These notes found little favour with the public and by late September 1914 the government in Guadalajara was arranging their withdrawal, alongside Obregon’s issue from TepicMéxico Libre, Año I, Tomo I, Núm. 31, 11 September 1914. The exchange took placed in the Jefatura de Hacienda, situated next to the jardín de la Soledad.

However, Diéguez later arranged for more professional notes to be printed in Guadalajara, as authorised by his decree núm. 2. This issue consisted of cartones of 5c, 10c and 20c and notes for 50cBoletín Militar, Tomo I, Núm. 15, 1 August 1914. The article also mentions a $1 note. The 20c notes entered circulation on 6 AugustMéxico Libre, Núm. 2, 6 August 1914, and the 5c and 10c were expected shortlyMéxico Libre, Núm. 2, 6 August 1914; El Reformador, 7 August 1914. The 10c cartón was later counterfeited (see below). 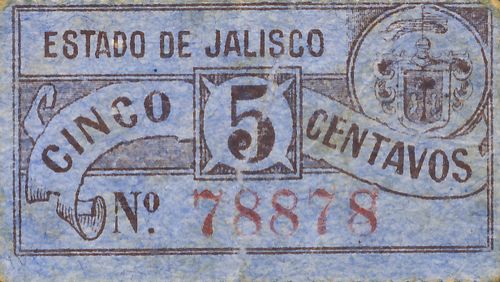 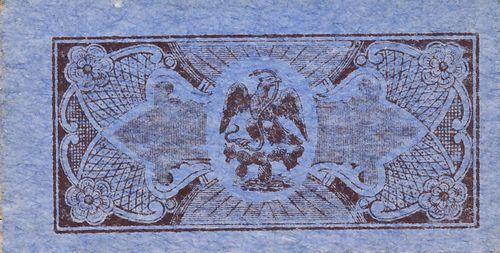 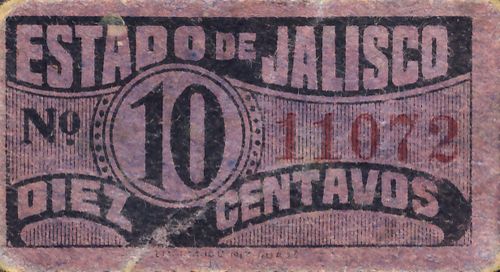 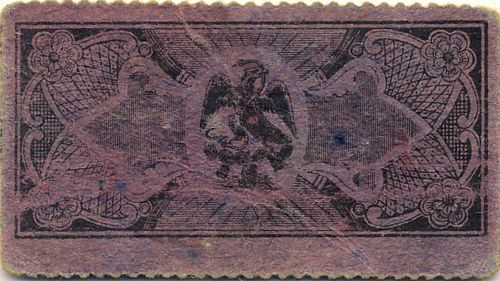 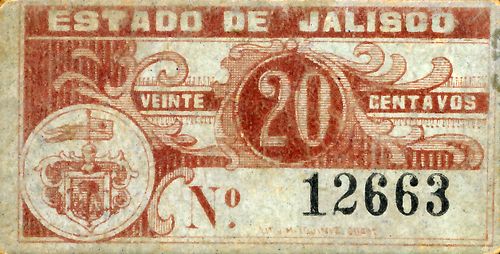 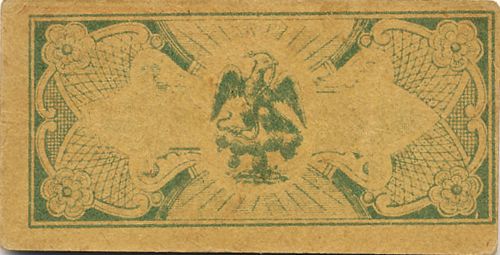 According to the printer, José María Iguíniz, he did not have enough pasteboard for the cartones, so the remainder were printed as notes, probably by the Ancira printing house. These larger notes, Series A 5c, 10c and 20c and Series B 50c, carried the printed signatures of Diéguez as governor, Manuel Aguirre Berlanga as secretary, and Gustavo J. Jiménez as Director General de Rentas. 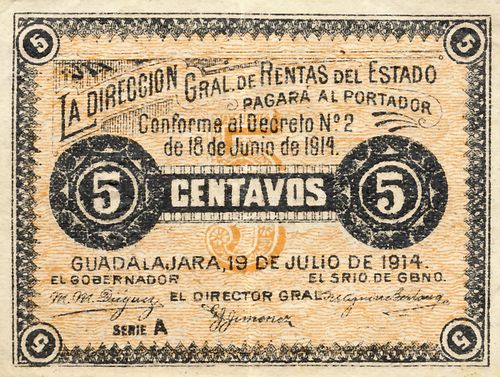 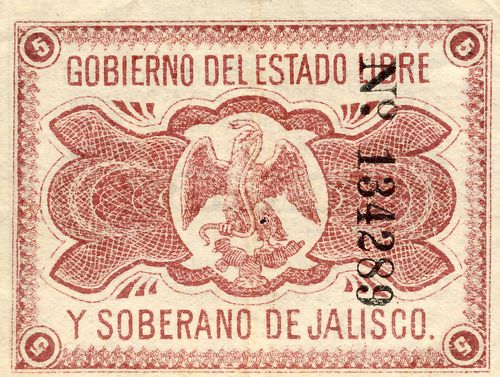 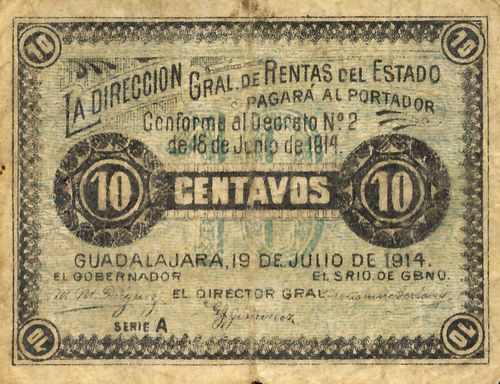 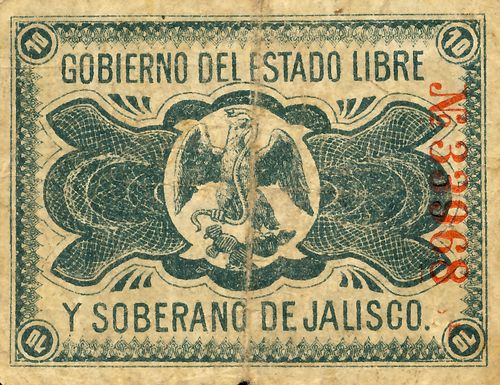 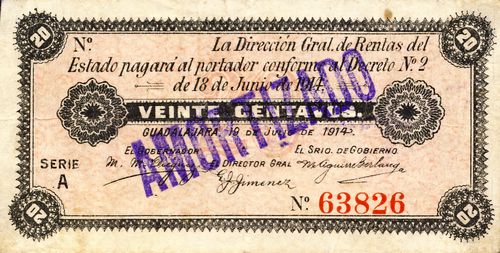 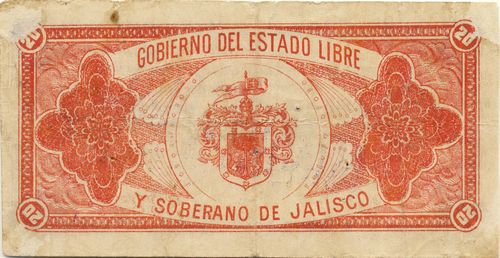 These were supposedly guaranteed by a deposit of Constitutionalist notes in the Dirección General de Rentas and could be exchanged for such Constitutionalist issues, including those issued by the governments of the states of Sonora, Chihuahua, Sinaloa, Durango, Nuevo León and Tamaulipas. 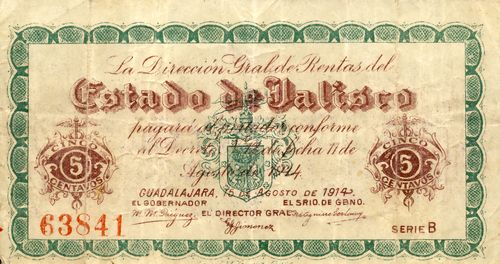 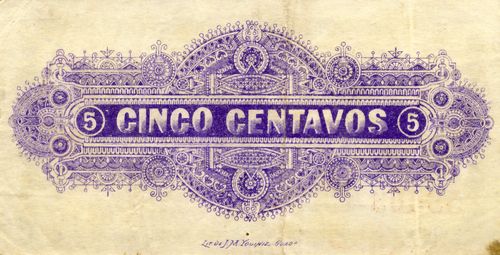 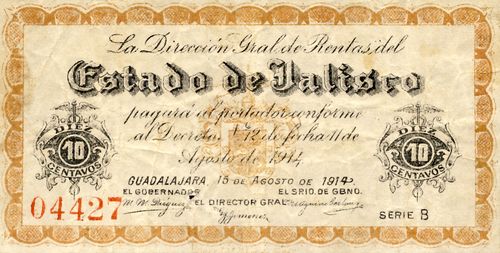 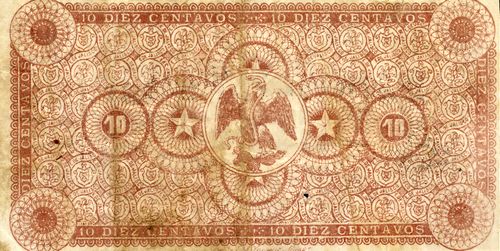 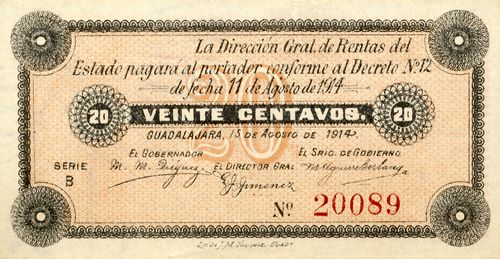 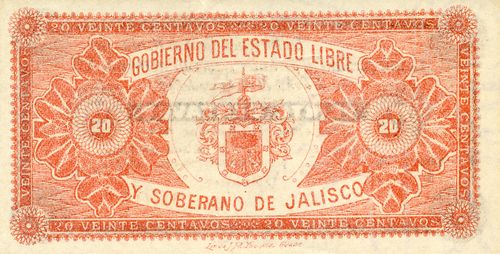 The 50c note was modeled on the Chihuahua 50c note which had been printed in May 1914 by the Maverick-Clarke company of San Antonio, Texas for Francisco Villa’s state government. By August relations between Carranza and Villa were becoming strained, so it is perhaps surprising that they chose this image (and struck with it in subsequent issues). These notes were produced by the well-established local printing house Litografía y Encuadernación de J. M. Yguiniz. 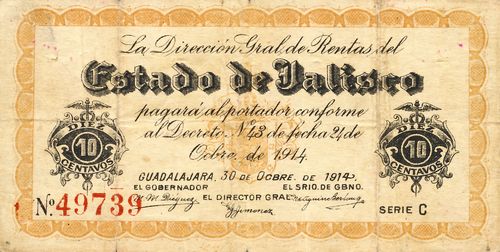 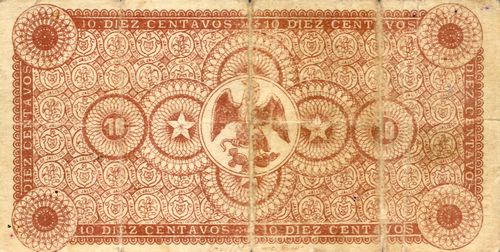 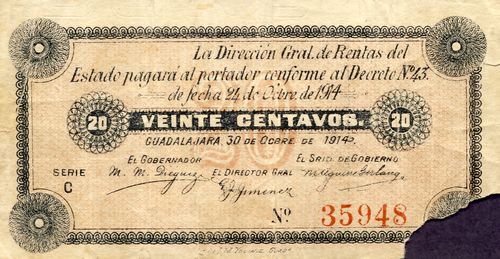 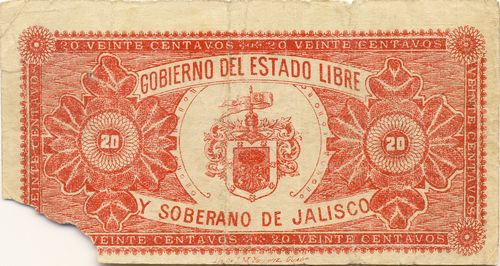 Diéguez was not popular with either the upper or the lower classes of society and many of the revolutionaries from Jalisco, headed by Julián C. Medina, joined Villa. On 12 December Diéguez was forced to move his capital to Ciudad Guzmán and two days later was driven out of Guadalajara. Villa made a triumphant entry, and Medina became governor.  On 18 January 1915 Diéguez recaptured Guadalajara from the troops that Villa left behind: then Villa defeated Diéguez and on 13 February reoccupied the city, being received even more enthusiastically than on the previous occasion.  Diéguez then retook the city on 18 April 1915.

During these changes in fortune both sides made pronouncements about the paper money in issue, and there are a series of overprints known on the other issues as one side or the other revalidated notes. However, Diéguez’ own issues escaped the need for revalidation, possibly because their quality made them less susceptible to counterfeiting. Thus, on 11 January 1915 Medina told people to present the money issued by Conventionist jefes who had operated in the state at the Dirección General de Rentas before 31 January to check its validity as after that date it would be considered worthlessEl Estado de Jalisco, Tomo LXXX, Núm 14, 12 January 1915. Then on 19 January the newly-arrived Diéguez published Carranza’s decree of 27 November disowning Chihuahua and Convention issues. On the next day, he issued another series of notes ($1, $5 and $10), but in his capacity as General en Jefe de la División de Occidente, rather than as governor.

These were also printed by Iguíniz, and had a portrait of General Ramón Corona Madrigal, a native of Jalisco who fought the French and accepted the surrender of the Emperor Maximilian, and a view of the Palacio de Gobierno in Guadalajara on the front. They bear more than a passing resemblance to Obregón’s Pagaduría del Cuerpo del Noroeste issue, also from Guadalajara. As well as Diéguez’ signature, they had the signatures of Coronel Amado Aguirre as Chief of General Staff and A. Ruiz as Jefe de Hacienda. The text stated that the Tesorería de la Nación would redeem these in notes of Carranza’s 19 September issue.

Later, in January 1916, Dieguez wrote to Obregón (and hence Carranza) explaining that in November 1914, when he was lacking communication with Obregón headquarters and the Primera Jefatura, he had reorganised his five battalions and five regiments into the División de Occidente and also issued $2,000,000 in paper currency. He asked for retroactive authorisation for his actions, and Carranza replied on 31 January, stating that he had also ordered the Secretaría de Hacienda to change the notes in due course for Gobierno Provisional notesEl Pueblo, Año III, Tomo I, Núm. 468, 2 February 1916.

Diéguez also felt the need for higher value notes as he used some Gobierno Provisional de México 50 pesos notes without signatures but with an overstamp dated 28 January 1915 with Diéguez’ signature that stated that they were of obligatory acceptance.

Some of these (such as the example above) were later revalidated by the Jefatura de Hacienda.

These were still being used in April 1916 when the Jefatura de Hacienda in Guadalajara announced that they would continue exchanging them.

On 4 February, by decree núm. 59, Diéguez authorized a fourth issue of fractional notes - $100,000 comprising of 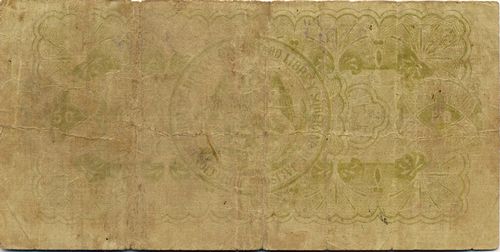 These would be changed, when opportunity offered, for Carranza’s Gobierno Provisional de México notes. However a later decree (núm. 65, see below) referred to 50c notes authorized by a decree of 1 February and this is the date on the only known value. On 6 April 1915, the Villista Medina, in an official clarification, stated that the notes that were of forced circulation in the state were the two Chihuahua issues, the Constitutionalist cartones and the 5c, 10c and 20c notes of the first, second and third issues of the Dirección General de RentasEl Estado de Jalisco, Tomo LXXX, Núm. 42, 8 April 1915; La República, Núm. 59, 9 April 1915.  So he was, of necessity, allowing the smaller values but did not acknowledge any 50c notes or Diéguez’ fourth issue. 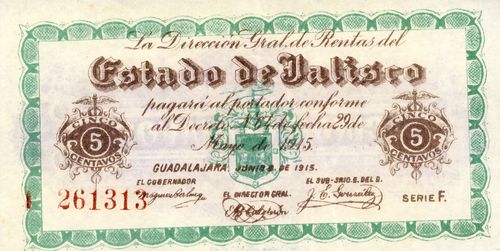 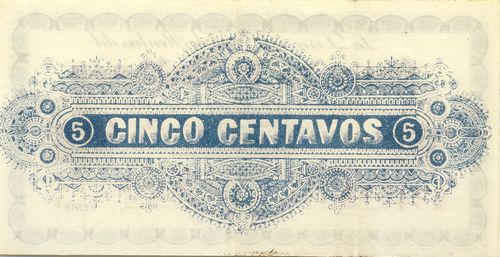 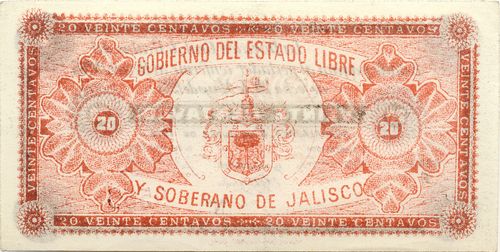 On 4 September 1915 the Director General de Rentas, E, B. Calderón, published a warning that counterfeit 10c cartones had been found. Examples of counterfeit and legitimate notes were on display in the department stores “La Ciudad de México” and “La Fama Italiana” so that people could know the differencesBoletín Militar, Tomo III, Núm. 260, 5 September 1915.

In August 1915 Coronel José J. Obregón in Mazatlán, declared that the latest issue of notes from Jalisco were of forced circulation in SinaloaBoletín Militar, Tomo III, Núm. 235, 7 August 1915.

On 27 August 1915 the Jefe Pólitico in Zacatecas, L. T. Villaseñor advised that the notes issued by the Pagaduría General del Ejército del Noroeste, as well as those issued by General M. M. Diéguez in Guadalajara and by the Zacatecas Cámara de Comercio were of forced circulation.

On 11 May 1915 Carranza’s Secretaría de Hacienda, in a list of notes, included in those that were of legal tender, the ones issued by General Diéguez, as governor of Jalisco, in accordance with the Secretaría’s authorization of 27 March 1915.

On 28 June Carranza, in his circular núm. 28, stating that the need for the fractional notes (10c, 20c and 50c) of the Cuerpo de Ejército del Noreste had passed, ordered that they be exchanged in the Tesorería General de la Nación for other Constitutionalist notes. This circular was reprinted in the Boletin Militar of 25 September.

On 18 September the Secretaría announced that until it had sufficient funds to exchange the notes issued by Obregón and Diéguez Carranza had decreed that these would continue to be of forced circulation. Two days later the Jefe de Hacienda in Guadalajara, G. Vargas, stated that the notes still remained of legal, forced circulation, until they were exchanged in his JefaturaBoletín Militar, Tomo III, Núm. 277, 26 September 1915. In this respect these notes were in a better position than others that had to be deposited in the Jefaturas in exchange for receipts, to be redeemed at a later date. They appear to have remained a dominant issue in the west of the country for a few more months.

On 3 February 1916 it was reported that Carranza had ordered his Secretaría de Hacienda to change the $2 million in Diéguez notes for Gobierno Provisional notes when the opportunity arose Boletín Militar, Tomo V, Núm. 387, 3 February 1916.

On 28 April 1916, as part of the move to introduce a unified currency, Carranza listed various issues, including the 20 January 1915 issue, that would be accepted until 30 June on deposit by the Tesorería General de la Nación, Jefaturas de Hacienda and Administraciones Principales del Timbre. After that date they would be null and void. All other notes were declared null and void. An American stationed in Guadalajara recorded the effect of this decree on the Diéguez issue: “One of the effects of this edict was to throw out of circulation at once all the Obregon and Dieguez money which, on account of one of the many former financial edicts requiring all other kinds of revolutionary money except the Obregon-Dieguez issues to “resellado” (restamped), had become the favorite money here. This favoritism for the Obregon and Dieguez money was heightened from the fact that such a large percentage of the money which had to be “resellado” was being declared “falso” (counterfeit) by the government agents. Therefore, when the Obregon and Dieguez money was suddenly thrown out of circulation by said edict, many, and especially the market people and wage earners, were caught with hardly any other kind of money in their possession. Moreover, nearly all the subsidiary bills used here for small change were of these issues. Hence thousands of people awoke on Wednesday morning, the 3rd of May, and found themselves unable to purchase in the markets of the city as much as a day’s rations. And there was not offered any relief ahead than the promise by the government that after the 30th of June they might deposit with the government’s agents such money as was yet permitted to circulate and receive – something in the future – one infalsificable pesos for every two of the old"Will B. Davis, Experiences and Observations of an American Consular Officer during the recent Mexican Revolutions, 1920, p234.

On 24 July 1916 Carranza decreed that from 1 August they would exchange the notes listed in the decree of 28 April that had been deposited in the offices of Hacienda with infalsificables at a rate of 10 to 1.