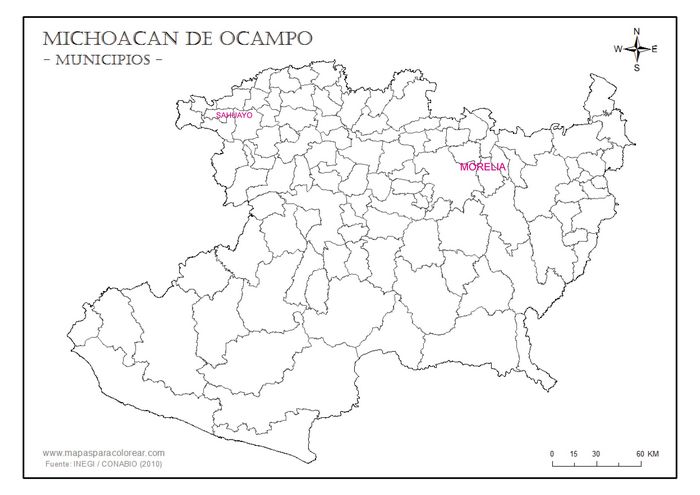 At the beginning of the Mexican Revolution, the only denunciation of the Porfirista government made in the western part of Michoacân was in Zamora during May 1911, where new authorities were peacefully elected. At that time Sahuayo, a village of 8,302 inhabitants, was thus included in the Madero area.

It was not until 19 June 1914 that 100 Carrancista revolutionaries entered Sahuayo under the command of General José María Morales Ibarra, with whom the citizens reached an agreement. Morales later went to Jiquilpan (the district capital) leaving a force of 40 men in the village. On 22 June General Eugenio Zúñiga, also a Carrancista, made his entrance into Jiquilpan with 700 men.

Meanwhile, in Sahuayo the presidente municipal, Luis Sánchez Ramírez, and a group of residents met with General Morales and almost convinced him to attack Zúñiga. The then Captain Lázaro Cárdenas (the future President), upon learning of this, asked Morales not to help Sahuayo, that had declared itself "of the party of the usurper government that Victoriano Huerta headed". Cárdenas returned to Jiquilpan after having avoided the conflict between two allied groups. On 23 June General Zúñiga entered Sahuayo, being received by Morales and Sánchez Ramírez. The people of Sahuayo had confidence in Morales so they permitted Zúñiga to enter when he offered guarantees. The town, armed with 500 rifles, was ready. Zúñiga took advantage of the situation and went to the convent of a religious order and demanded $5,000. He threatened to dynamite the building if the money was not given to him. The Mother Superior Teresa Campos Calderón told him that they lived on charity and did not have that amount, therefore he could do what he wished. On seeing the danger that they were in, the curate Pascual Orozco and other priests tried to sort the situation out by visiting Zúñiga in the hotel where he was staying. Far from retreating, Zúñiga took them prisoners and ordered his troops to detain all the priests that they found. Later, fearing an insurrection because the people were so furious, he marched to Jiquilpan, taking with him the curate and ten other priests. In Jiquilpan he demanded $40,000 and the surrender of all the arms in exchange for the people he had detained. As pressure he threatened to execute one of them every half hour until the ransom was delivered. He began with José Marfa Gálvez Sánchez whom he had also detained because he had defended his ranch. He ordered him to be to be executed on 26 June in front of the priests. General Cardenas was witness and recounts that "pointing at one of the priests he said to the commander of the escort 'next I will execute that one'. The priest then ran up to Zúñiga to implore clemency, exclaiming, 'why are you going to shoot me?', to which Zúñiga replied, 'por bonito y pore ... "(?). On 27 June Pofirio Villasenor, a resident of Jiquilpan, delivered the ransom or most of it, because the rich men of Sahuayo had taken flight to the capitals of Mexico and Guadalajara. Zúñiga kept his word and released the priests but one of them, Father Federico Sánchez who was the subject of the false execution, had received such an impression that he died days later of a bilious attack.

The resentment in the town was so great against General Zúñiga that the citizens decided to revolt against the Carrancistas in order to defend themselves from such abuse. When they had to define their movement, being very conservative they declared for Villa because he was not anticlerical. At the end of 1914, José Ramírez Sánchez and his brothers together with Miguel Gálvez Toscano with the assent of the citizens organized a batallion. As a rejection of the revolutionary issues and/or to finance their campaign, they ordered the printing of notes of 10c, 20c and 50c and $1 and $5 in accord with a decree of 15 November 1914[text  needed], probably from the only print shop in the town called "Guadalupana". Its owner, Estanislao Amezcua Orozco, was also the owner of the pharmacy where the principal citizens and priests went and where meetings were also held. One of the assiduous meeting attendees was Demetria Rojas, friend and collaborator of Don Estanislao in the publication of the Catholic weekly La Verdad. It was rumoured that this press had been abandoned by the French in the battle of "la trasquila" in 1884 when they defeated the Republicans. 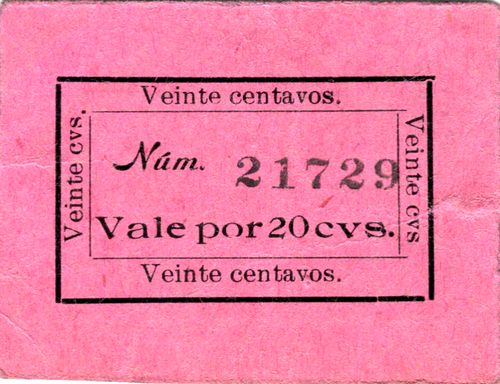 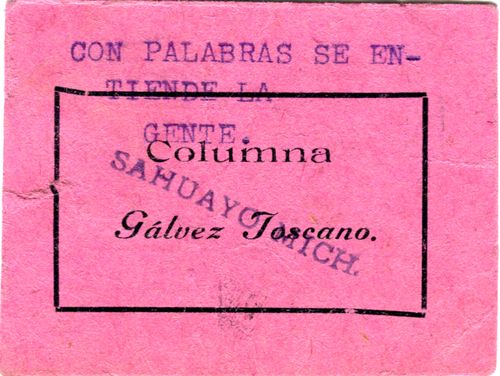 The only source that gives details of  Gálvez and Ramírez' uprising is José Prado SánchezJosé Prado Sánchez, Sahuayo Tradiciones y Leyendas, Edición de Autor, Azuayo, 1976. He tells us that in a relatively short time a batallion was formed, "well armed and mounted" and even with a music band to give them spirit, and camped in Contla, Jalisco. There it is noted that Nicanor Mora deserted and Miguel Gálvez condemned him to be shot. General Ramirez with 20 men went to interview Mora in Pajacuarán and convinced him to give up his ideas and return with him. On the road they met Vicente Gálvez, nephew of General Gálvez Toscano, who was coming from La Piedad with a strong number of men to join the forces of his uncle. Returning to Sahuayo, José Ramirez was informed that General Fox with 200 Yaquis under his command was sent by the Carrancistas "with instructions to burn the town". He was asked to stay and defend it. General Ramírez opted to confront the enemy on the battlefield and at dawn on 12 December with 20 men he approached on the mountainous side whilst Vicente Gálvez went by Lake Chapala where they surprised the enemy. In a hard fought battle Vicente Gálvez was killed and his people decided to return to Sahuayo where Ignacio, brother of José Ramírez, tried to convince them to return to help his brother but only managed to get them to stay to defend the town in case José Ramírez was defeated. This one, knowing well the muddy land, "using his high courage and strategy, fought all day with his twenty men and succeeded in defeating the Yaquis, took them prisoner, shot the leaders and took 40 prisoners to Sahuayo as trophies". José Prado concludes by saying that General Ramírez gave money to some of the captives so they could return to their homes and that others went voluntarily. With the defeat of the Yaquis of General Fox, Luis González says "the private revolution of Gálvez and Ramírez ended".

So, these notes of the Columna Gálvez Toscano Column can be considered a Villista issue, they must have been printed in the Guadalupana shop of Estanislao Amezcua Orozco and were signed by Miguel Gálvez Toscano and José Ramírez Sánchez as General and Treasurer respectivelyPrado Sánchez adds that if the first letter of the signature of the Treasurer is Y (which he did not believe), then it is of Ygnacio Ramírez Sánchez, José's brother.

Later notes have the spurious(?) signatures of [    ] as General and S. Ortega as Tesorero.