The 1935 crisis began when the United States passed its American Silver Purchase Act on 19 June 1934: this caused to price of silver to increase and as a result, in Mexico, silver coins began to be hoarded to be remelted at a profit. On 25 April 1935 the Mexican government reacted with a series of reforms, changing the fineness of its coinage, and withdrawing silver coins from circulation. It had ordered 50c coins (tostones) and $1 Banco de México notes from the United States but until these arrived the sudden shortage of small change led to these “necessity notes”. When the crisis passed most of these cheques were redeemed (out of $10,000 issued by the Uníon Nacional de Industria y Comercio in Guadalajara only $18 was not handed in) and so survivors are extremely rare. 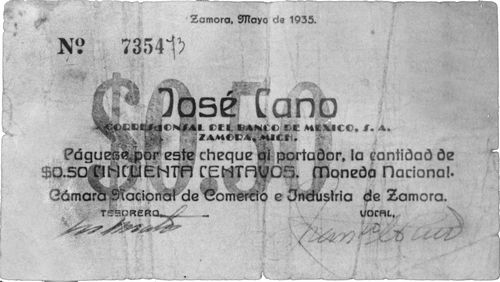