In 1943, during the Second World War, Mexico was again faced with a silver crisis. A combination of reasons - anticipation of a rise in the price of silver; the Mexican government’s agreement to sell practically its entire silver production to the United States for its military industry; and a boom in the Mexican and US jewellery industries - caused the price of silver to rise and silver coins to be hoarded. On 21 August Mexico imposed a heavy export tax on silver products, to make it unprofitable to melt down silver coins to ship as bullion, and temporarily suspended a contract which promised all surplus silver production to the United States. However because of a shortage of fractional coinage, especially the fifty centavos denomination, it was compelled to authorise banks to issue cheques with printed denominations of twenty-five and fifty centavos, while it arranged for the production of new coins. 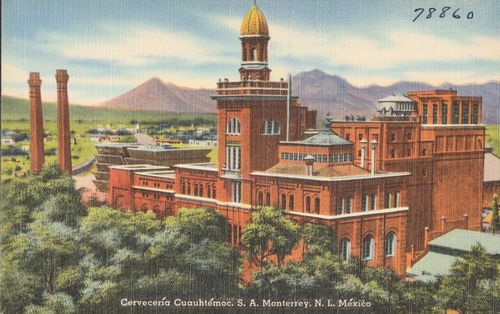 On 16 December 1890 Isaac Garza and the American Joseph M. Schnaider applied to the state government for a concession to establish a factory for ice and "export beer", in which a minimum of $125,000 would be invested. Four days later, on 20 December, they were granted a tax exemption for a period of seven years. The industry began operating at the end of 1891, and soon afterwards its founders asked for a new concession, as the investment was much larger than originally planned. On 5 August 1892 they were granted exemption from taxes for a term of twelve years. Originally the brewery's annual production was only sixty thousand barrels of beer and eight thousand tons of ice. However, its expansion was very rapid. About ten years after it began operations it had a capital of $2,000,000, and in 1909, its nominal capital was $5,000,000, but its real value was estimated to reach $8,000,000. Already by the year of 1903 this factory employed about six hundred to seven hundred workers. The annual production of beer was one hundred thousand barrels and had the capacity to bottle daily eighty thousand units. It also produced 365 tons of ice per day. It had workshops for carpentry, tin smithing, blacksmithing, bodywork, saddlery, cooperage and painting. He also had about thirty carts to meet the local demand for ice and beer, completely manufactured in its body shop. It also had large stables and a fire service. At first, the factory was driven by steam, but in the early years of the nineteenth century this was replaced by electric power. By 1909 its capacity was three hundred thousand barrels of beer per year. Daily it could bottle three hundred thousand units and produce seven hundred and fifty tons of ice. It then employed fifteen hundred workers.

The Cervecería Cuauhtémoc’s product was immediately very well received and during its early years it gained many awards, both in national and international exhibitions, the most important being perhaps the First Prize at the Universal Exhibition in Chicago (1893), the Only Grand Prize at the St. Louis Exposition, Missouri (1904), the Only Grand Prize at the Milan Exposition (1906) and the Only Grand Prize at the Antwerp World's Fair (1907). The product of this company, in addition to being shipped to all parts of Mexico, was exported mainly to the countries of Central America. During this time the Board of Directors was composed of the following people: president Isaac Garza, secretary José A. Muguerza, treasurer José Calderón, commissioner Alberto Sada and general manager Francisco G. Sada. Almost all the employees of the brewery department were then Germans, and the engineering and mechanical departments were dominated by Americans.

The brewery notes are dated 12 August.

They are signed by Carlos Gloria.

La Fábrica de Cartón Monterrey, S.A., was established on 6 January 1900 with a capital of $38,000, with the primary objective to manufacture cardboard boxes to pack beer bottles (thus replacing wooden boxes).The president of the board was José Muguerza and its manager Juan F. Farías.

La Fábrica de Vidrios y Cristales, S.A was established on 20 October 1899, under a concession granted by the state government to Luis Manero in July of that year. The first Consejo de Administración was composed of Isaac Garza, presidente, Luis Manero, secretario, Tomás Mendirichaga, tesorero, and the consejeros Guido Moebius, Manuel Cantú Treviño, Miguel Ferrara, Valentín Rivero y Gajá, Ernesto Madero and Adolfo Zambrano. Francisco Belden, José A. Muguerza and Fernando Martínez were comisarios. Installation work began on 1 January 1901 and glass production began in March 1903. The plant was dedicated to the manufacture of bottles by means of individual blowing, and for this workers were brought from Germany, to whom Mexican assistants were attached. The high salaries paid to foreign workers and their poor performance caused the industry to fail, and, after heavy losses, the business closed at the end of 1903.

Meanwhile, in 1905 John Brittingham, Juan Terrazas and Francisco Belden, in association with the American Arthur E. Fowle, had acquired the Owens patent, which protected a very recent technology that replaced manual processes. The commercialization of the invention was in the hands of the Toledo Glass Co. After visiting the Great Industrial Exposition of St. Louis Missouri in November 1904, Brittingham became interested in these technological advances. The technical director of the glycerin factory attached to the Compañía Industrial Jabonera, Arthur E. Fowle, was a cousin of one of the senior managers of Toledo Glass Co. Brittingham, Juan Terrazas (both also important shareholders of Cervecería Chihuahua), Francisco Belden and Fowle himself decided to establish La Owens en México, S.A. to hold the rights to the process in Mexico for twenty years.

Through Francisco Belden and Tomás Mendirichaga negotiations began, in June 1905, between the directors of Cervecería Cuauhtémoc and La Owens in Mexico S.A. The negotiations were protracted and, at the moment, tortuous. When in the early morning of 18 October 1908, a fire destroyed Cervecería Chihuahua – and unexpectedly removed it from the market – the arrangement between the nuclei of Chihuahua/La Laguna and Monterrey began to accelerate.

So In 1909, Monterrey businessmen acquired the Owens patent and reached an agreement with the shareholders of the former glass factory in liquidation: it was agreed that one group would contribute the remaining assets of the Fábrica de Vidrios y Cristales and the other the Owens patent, both parties, in half, underwriting the cash to start a new company. Thus, the Vidriera Monterrey was founded, with a capital of $1,200,000. On 31 December of the same year the state government granted it an exemption from taxes for twelve years. The first board of the new company, with members from both groups, was composed of Isaac Garza as president, Juan F. Brittingham as vice-president, Mariano Hernández as secretary, Juan Terrazas as treasurer, Francisco G. Sada, Arturo E. Fowle, Manuel Cantú Treviño, Juan Francisco Terrazas and José Belden as consejeros and Roberto G. Sada as mamager.

This is signed by Alvaro Garza.

By 1 September Miguel Margáin, secretary general of the Cámara, reported that they had issued $100,000 and had agree to issue even moreEl Porvenir, 1 September 1943.

On 29 September Treviño García said that the banks were still changing deteriorated cheques for others of the same value or, in greater quantities, for banknotesEl Porvenir, 29 September 1943. The new fractional coinage did not arrive until 23 OctoberEl Porvenir, 24 October 1943.