In Monterrey the lack of small change had severe repercussions in the markets, such as in the sale of nixtamal (corn cooked in an alkaline solution that is used to make masa and tortillas). The smallest coin in circulation was the five centavos so on 24 September 1914 the nixtamel sellers complained about the lack of one and two centavo coins, that were used by their customers.

As a solution the governor, Antonio I. Villarreal, authorised them to produce notes of one or two centavos, stamped by the Presidencia Municipal, to a total of one hundred pesosANL, Concluidos, 1914.

The only known surviving example is a one centavo note, measuring 47mm x 25mm, from the firm of Garza Flores HermanosPablo González Garza was born in Monterrey, on 24 December 1867. His father was a merchant who transported merchandise between Monterrey and Laredo, Texas. After an education in Monterrey, Galeana and San Antonio, Texas he worker for his father and after the latter’s death moved back to Monterrey. There he began to grind nixtamal in a steel cylinder mill, at calle de la Presa (now calle Diego de Montemayor), between Terán and 15 de Mayo.
González Garza designed a mill with substantial improvements in the speed of dough production, as well as in the ease of handling and maintenance, so that the process of grinding nixtamalized corn became seven times faster than usual. Garza came to own several manufacturers and concessionaires of mills, among them la Compañía Molinera Mexicana. He was also associated with his cousins, who founded a similar company in Monterrey, Garza Flores Hermanos, who had their workshop and offices in the building that later became what was the famous restaurant La Barra Antigua, on avenida Constitución. By the end of the 19th century there were 400 mills, distributed from Chihuahua to the Isthmus of Tehuantepec. There are at least 25 patent registrations in González Garza's name, most of them in Mexico, but some in San Antonio and one more in Canada.
González Garza died in the city of San Antonio, Texas, on 22 May 1927 (information from Pedro Antonio de la Garza González, Pablo González Garza, Inventor y Empresario Regiomontano).. This was (poorly) illustrated in Gaytan’s Paper Currency of Mexico catalogue and sold in Richard Long’s 1974 auction. 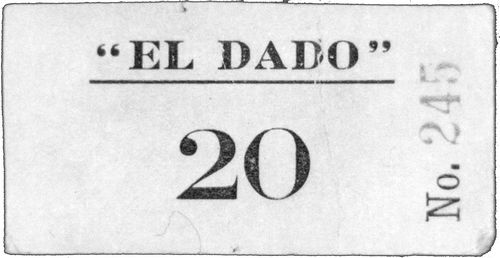 El Dado was a cantina. Note number 245 was stamped MAURICE M. BARON and dated 15 September 1915 on the reverse. Baron marketed a tamarind syrup as a medicine against fever which he trademarked in the United States in August 1922Official Gazette of the United States Patent Office, vol. 301.

Is there any information that the tram company’s tickets were used as a substitute for small change, as occurred elsewhere in Mexico? The only piece to fit this narrative is a one centavo note, possibly too small for the price of a passage and so presumably given as change. 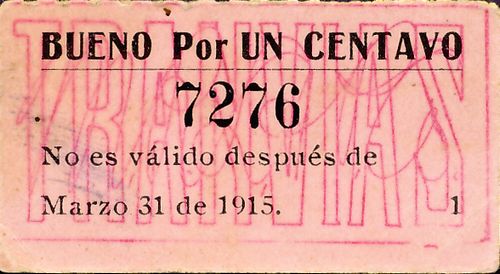 The other pieces in the catalogues date from the mid 1915. They show that the company sold its tickets in strips and that they were to be used within a certain period (i.e. valid until the end of March, August etc).