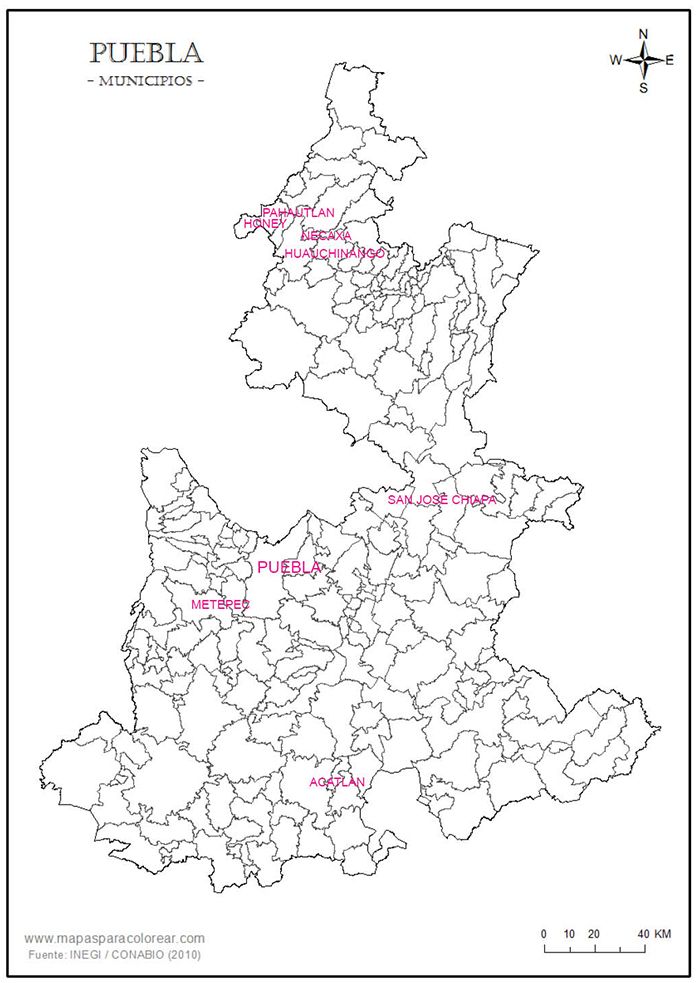 These issues were made by individuals or corporations.

Honey, named after Ricardo Honey, is a town, now in Puebla but touching the state line with Hidalgo while Pahuatlán was located fourteen kilometres away in a northeastern direction.

Julio Hernández was a major businessman in Honey and Pahuatlán. He would buy in coffee and piloncillo (a basic form of sugar), platanos and pineapples from small-scale growers in the surrounding neighbourhood and store them in his warehouses in Honey until he had acquired ten, twenty or thirty tons, when he would transport them by rail to Mexico City. Hernández’ store in Pahuatlán “was about twenty metres long, where there was buying and selling of coffee, chickpeas, all produce by quarters or quarts. There were imported clothes, there were quite a few things to buy. The people of the villages came with their loads of coffee, their loads of piloncillo, their loads of chickpea, of beans. They would sell them or buy their stuff. This was carried away on mules. You saw the streets full of mules, of all that they broughtFrancisco Prado quoted in Eugenia D’Aubeterre Buznego and Leticia Rivermar Pérez, El ciclo histórico de las migraciones en el municipio de Pahuatlán, Puebla, .

This $1 note, issued in June 1915, because of a lack of $1 notes, is payable in Pahuatlán on presentation, in multiples of five pesos. 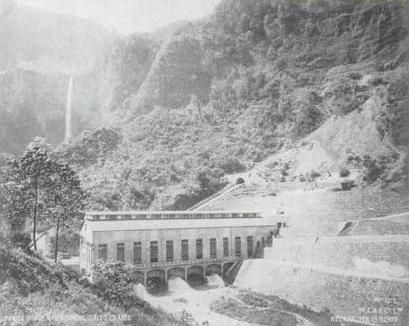 The Compañía Mexicana de Luz y Fuerza Motriz (Mexican Light & Power Company Limited) was organized in 1902 with a capital of 25m dollars and in 1903 was granted a concession to exploit the falls and build a hydroelectric plant on the Río Necaxa to serve Mexico City and the mining centres of El Oro and Pachuca.

Huauchinango is a city in the far north of the state. The politician Luis Cabrera came from nearby Zacatlán[if correct identification] Luis Cabrera Lobato was born in Zacatlán, Puebla on 17 July 1876. He graduated from the National School of Law and worked in the law firm of Rodolfo Reyes. He was also a journalist at El Noticioso, El Diario del Hogar, La Patria and El Colmillo Blanco.
His participation in militant politics dated back to at least 1908, when he participated in the first antireelection clubs. Originally a supporter of Bernardo Reyes' candidacy, he then supported Madero's, although he was never a Maderista. He was one of the sharpest critics of the Treaties of Ciudad Juárez and of the naivety that from then on characterized most of Madero's actions. He was a deputy in the XXVI Legislature in 1912. Upon Madero’s deaths, Cabrera joined Carranza, who in 1913 appointed him confidential agent in the United States. He was Secretario de Hacienda in two periods: 1914-1917 and 1919-1920.
He accompanied Carranza to Tlaxcalantongo, but by June 1920 was in the United States, and on 26 June Obregón attacked him for political reasons, saying that "he was the author of the destruction of the credit enjoyed by our country."
In 1931 he gave a lecture at the National Library which, being considered an attack on Callismo, caused him to be banished to Guatemala by president Pascual Ortiz Rubio. In 1933 he was offered by the Anti-Reeleciotionist party the candidacy for the presidency but declined. He wrote numerous newspaper articles expressing his reasons, opposed, more often than not, to certain laws of government. In 1946 he again declined his candidacy for the presidency, on behalf of the Partido Acción Nacional. He died in Mexico City on 12 April 1954.. 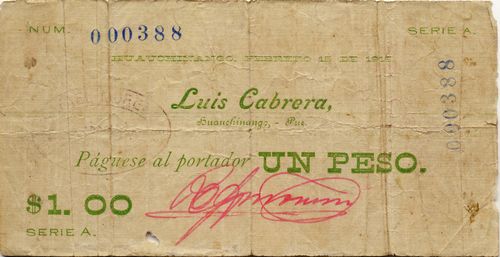 These are signed by Rafael Moreno. 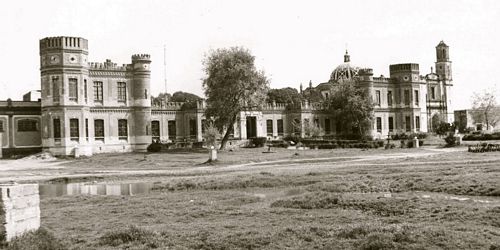 The hacienda Ozumba, which lies between San Juan de los Llanos and Chalchicomula, produced cereals, raised pigs, and had access to extensive pastures. During the years of the Revolution, the employees complained about the payment of wages with paper money (though this might not have been specific to or produced by the hacienda). During this time the management of the hacienda had reason to fear for the safety of the money sent to the farm for weekly payments.

The catalogue list a 5c cartón from this store. Metepec is part of Atlixco. Is this right, or is it the Metepec in Estado de México? 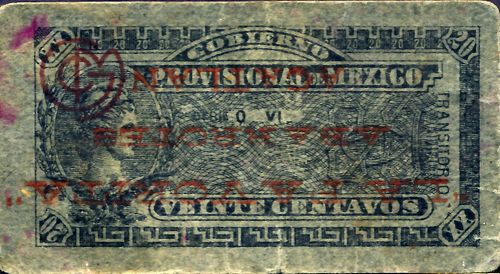 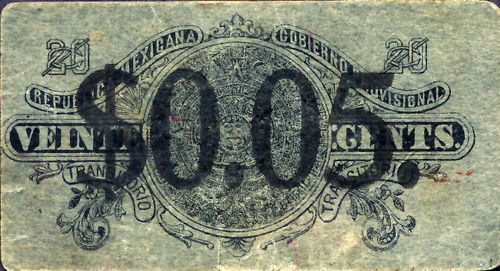 This is a 20c Gobierno Provisional de México cartón overprinted with a new denomination of 5c and, on the face, in red, the legend "LA FAVORITA" / ABARROTES / ACATLAN.

One scenario is that the grocery store itself would not have been responsible for the devaluation/revaluation, which will have been an official overprint in the short window between the beginning of June 1916 when Carranza informed the governors of various states that the Gobierno Provisional de México notes should be accepted at a rate of $4 Gobierno Provisional as one peso infalsificableCEHM, Fondo XXI-4 and the circular núm. 102 of 10 June that sets the exchange rate at ten for one. As such, the overprint will not have restricted the potential circulation and so this is not, strictly, a private issue.

Amother scenario is that, at a later date, the store found itself with a load of useless cartones and used them as a limited, private currency.